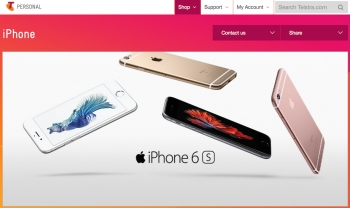 Telstra’s $195 plan strikes back at Vodafone’s $5 int’l roaming and everyone else’s premium iPhone 6s plans with standard-setting market-leading inclusions, while other plans prove tempting, too!

Telstra has launched its new iPhone 6s and 6 Plus plans and pricing, although its bigger than that with most deals open to Android flagships, the BlackBerry classic and Microsoft’s 640 handset as well.

The phone plans for all of Telstra’s current phones is here, on a minimum 24 month term.

The home page for Apple’s iPhone 6s and 6s plans is here.

The direct link for the iPhone 6s Plus sizes and plans is here.

The L plan gives 7GB and unlimited calling for $99 per month.

The XL plan gives 15GB data and unlimited calls for $135 per month.

These plans go up in price depending on the iPhone 6s variant you get, and the capacity that you choose, so the prices above are just for 16GB 6s models.

These plans also offer the ‘New Phone Feeling’ option to get a new phone after 12 months, for a simple $149 fee alongside returning your existing handset and swapping it for that brand new model.

There’s also a separately marketed ‘Premium Plan’ for $195 a month with 25GB data that appears to cover whichever iPhone 6s or Plus you want, (amongst a range of other Androids and the BlackBerry Classic but no Windows Phone models yet).

Full detail of this new Premium Plan is here.

According to the Premium Plan’s CIS - the Critical Information Summary (PDF Link), this plan includes unlimited domestic calls to standard landline and mobile numbers (national numbers) and most 11xx, 12xx, 13xx and 1800 numbers.

On top of that unlimited calls while in more than 38 countries including the USA, UK, China, major European countries, some major Middle East countries, and some major Asian and South East Asia countries alongside neighbour New Zealand and 1.5GB per month overseas in these eligible countries and you have a very interesting, albeit expensive, plan.

However, there’s more! You get the New Phone Feeling (CIS PDF link here) inclusion with no $149 redemption fee to upgrade to the latest and greatest model of your choice after 12 months (and re-contracting for another 24 months), swapping your now ‘old’ phone for a brand new one.

You also get ‘StayConnected Plus’ (CIS PDF link here), where ‘if something goes wrong you can swap your phone for a fee twice a year.’

On top of this is Premium Support, and ‘unlimited calls/SMS to standard numbers in any eligible country with another SIM-ready device.’

Part of the deal also includes a free data sharing SIM, worth $5 per month but included, so you can share your 25GB allocation with another phone or tablet with a second SIM.

You can get up to 5 SIMs to share with if desired, although additional SIMs are $5 per month.

You also get access to Telstra’s 4GX network which is even faster than a 4G connection when using a 4GX-capable phone, available in ‘selected areas’ as part of Telstra’s 4G footprint, making it the biggest and fastest 4G network in Australia, and which no other telco can match.

For anyone that wants their smartphone of choice with the lot, and can make use of all the included international calls and international roaming - or already pays similar amounts on other carriers - this could be a very tempting deal despite the fact it is one of the - if not the - most expensive yet feature packed plan in Australia.

All of the plans above also come with 24 months free access to Apple Music, after which $11.99 per month will be charged, in what is another bonus for Telstra customers - details of this offering are expanded upon in this Telstra Exchange blog post.

Sure, it is definitely possible to save money by buying the phone outright and using pre-paid services and month-to-month services such as Vodafone when travelling to achieve a similar effect in regards to international roaming, and make international calls through a service like Skype, them relying upon your own insurance to cover the phone in case of accident or loss and more, but Telstra’s $195 plan delivers its intended customers an unprecedented level of value and peace of mind for the money.

Separately to Telstra’s new plans for Androids, one BlackBerry, one Windows Phone model and the two new iPhones, Telstra has temporarily improved the value of its two bigger of three BYO plans.

The first is the $50 BYO Plan, which until September 28 gives you 5GB of data on the Telstra network for $50 per month on a 12 month contract - for new customers only.

As BYO suggests, you use this plan with your own existing phone.

It’s nowhere near as simple and easy the pre-paid services which offer unlimited voice calls for anywhere from $23.95 for voice only (no data) through to $35, $40, $44.90 and $54.90 pre-paid plans with various data amounts out there on telcos including Telstra MVNOs AldiMobile for the $35 and Boost for the $40 plans,

However, you are on Telstra’s 4GX network and with 5GB and the strong likelihood of Wi-Fi connectivity at home and work, you could make ample VoIP calls via Skype, Viber, FaceTime Audio and other apps alongside video calls to save your minutes for when they matter most.

To get unlimited voice calls, SMS and MMS, and 7GB of data you need to move to the $70 BYO plan, which again is more expensive than the pre-paid players and ties you into a 12 month contract but delivers access to HD Voice calls, Telstra’s 4G and 4GX networks and other Telstra inclusions. This plan appears to be accessible by any customer, current or new.

So, the Telstra empire has struck back with the best value plans it has likely ever offered, with the enhanced BYO plans coming with a time limit to tempt as many as possible to at least coming back to Telstra on a BYO-plan basis for at least 12 months if not on one of its S, M, L, XL or Premium plans with a 24 month contract.

Telstra’s plans and prices aren’t for everyone, but they still have strong appeal to a large segment of the market, especially those in business.

They also appeal at the BYO-end where Telstra stands a good chance of getting some data hungry customers back, especially those paying, for example $54.90 pre-paid to Amaysim for 7GB and unlimited calls/sms/mms on the Optus network.

Telstra’s $70 plan, until 28 September at least, is a 12 month plan, but gives 7GB of Telstra data and unlimited calls/sms/mms too for just $15.10 a month more. For some that’ll be very worth it.

So, it looks like Telstra has thrown down the gauntlet, with its 25GB plan and its $70 BYO plans both quite impressive in their inclusions and value.

If the BYO plans revert after 28 September they won’t be as good value but that’s the reason for having a sale - to get some return and new customers!

What do you think of Telstra’s plans, and are you tempted?

More in this category: « Optus releases pre-order iPhone 6s, 6s Plus pricing Vodafone details its iPhone 6s and 6s RED plans »
Share News tips for the iTWire Journalists? Your tip will be anonymous