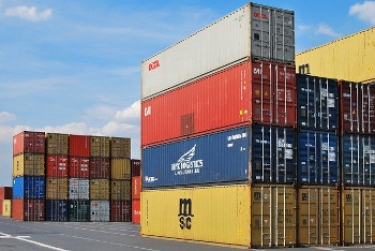 South Korean smartphone maker Samsung has regained the top spot in global shipments in the third quarter of the calendar year, after falling behind Chinese vendor Huawei in the second quarter, according to technology analyst firms Canalys, Counterpoint Research and IDC.

Canalys said global shipments in the third quarter had reached 348.0 million units, a drop of 1% year-on-year, but up 22% quarter-on-quarter. IDC listed higher figures, with 353.6 million units shipped, pointing out that this was a fall of 1.3% year-on-year but a much stronger showing than the firm's prediction of a 9% year-on-year decline.

Samsung's shipments grew by 2% to 80.2 million units, according to Canalys, with Huawei slipping down the order to second, with a 23% drop and 51.7 million units. Xiaomi took the third sport for the first time, displacing Apple by shipping 47.1 million units, which represented 45% growth.

Counterpoint's figures for Samsung were similar with the firm saying it had shipped 79.8 million units, with 2% year-on-year growth. 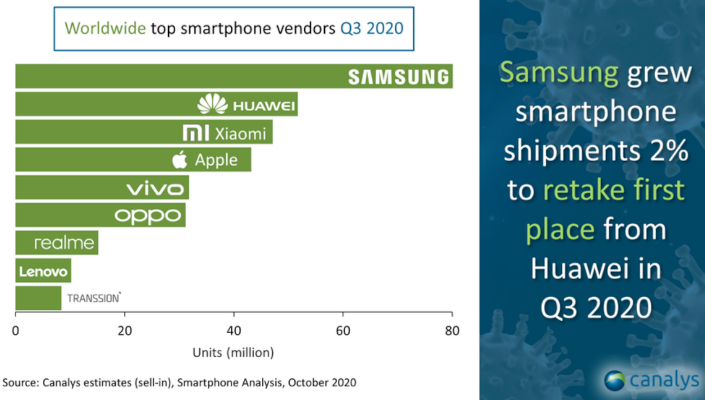 IDC's Worldwide Mobile Device Trackers research director Nabila Popal said: "Although there was an element of pent-up demand that fuelled market growth, it was mainly the array of heavy promotions and discounts that accelerated growth in these markets.

"In India, distance learning has actually boosted the demand for low-end smartphones as they are a more affordable option compared to tablets. The increased low-end demand only further increases competition and adds pressure to the vendors' bottom line."

Commenting on Xiaomi's ascension to the third spot, Counterpoint research analyst Abhilash Kumar said, “Xiaomi reached its highest-ever shipments at 46.2 million units in 3Q 2020. In China, Xiaomi’s struggle for growth ended and shipments were up 28% year-on-year and 35% quarter-on-quarter. 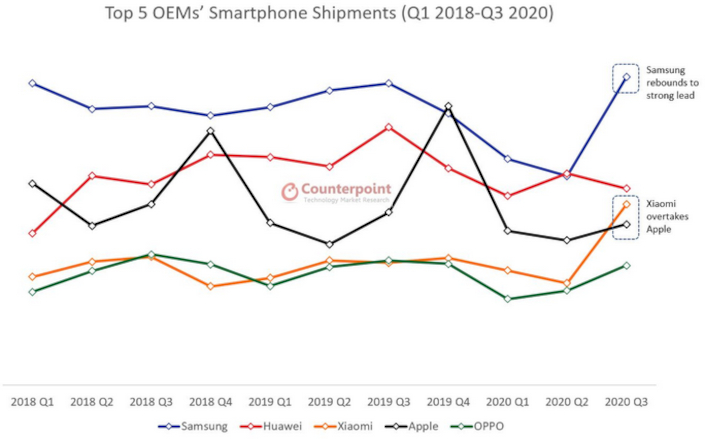 "This impressive show in China was driven by a series of campaigns and promotions during the brand’s decennial celebrations in August. Also, in new markets like LATAM, Europe and the MEA, Xiaomi’s share expanded rapidly at the expense of Huawei amid US-China trade sanctions. The brand is also performing well in Southeast Asian markets like Indonesia, Philippines and Vietnam.”

Canalys senior analyst Ben Stanton said the third quarter was a relief, with few restrictions on businesses and citizens between July and September.

“But the ramifications of the first-half lockdowns still persist," he hastened to add. "Offline channels, for example, are being increasingly pared back, amid store closures and staff redundancies, and vendors now have to compete harder to attain floorspace. Limited supply of 4G chipsets will cause supply chain bottlenecks and increase production costs.

"Additionally, rising COVID-19 rates in regions such as Europe will soon force governments to bring back stricter nationwide measures. The second wave will stretch government stimulus budgets, and cause widespread bankruptcies and job losses in affected areas. Unfortunately, the relief of 3Q looks set to be short-lived.”

More in this category: « Huawei keeps lead in China 3Q smartphone sales, but decline begins China smartphone shipments fell 15% in 3Q compared to 2019 »
Share News tips for the iTWire Journalists? Your tip will be anonymous