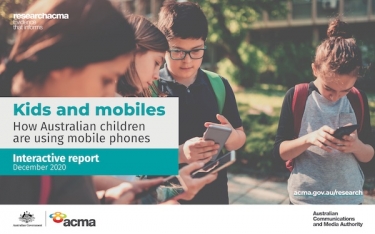 New research has found that almost half (46%) of Australian children aged between 6 to 13 years use a mobile phone—up from 41% in 2015 - with the trend continuing to grow.

The growing use of mobile phones by children is revealed in the Kids and Mobiles: How Australian children are using mobile phones interactive report from the Australian Communications and Media Authroity (ACMA) released on Friday.

And the report also reveals that ownership of a mobile phone is higher for the 12 to 13-year-olds, with just over three quarters (76%) of children in this age group owning the mobile they used.

It also reveals that around half of girls (48%) and boys (45%) had accessed a mobile phone.

Access among boys has risen, up from 38% in 2015, and in contrast, usage among girls has remained steady over the 6 year period.

The ACMA report notes that the most common reason for girls to reach for their phones was to take photos or videos, while for boys it was to play games - and children are also using mobiles to access apps, send or receive text messages, call their parents or family and listen to music.

The report measures how children’s use of mobile phones is changing, including how habits compare across different ages, locations and backgrounds, with the research compiled under the ACMA Research program.

The ACMA says that if you have concerns about your child’s use of mobile devices, the Office of the eSafety Commissioner has information and tools to help maximise online safety in your home.