Gloomy year for smartphones globally, and not much to anticipate in 2023 Featured 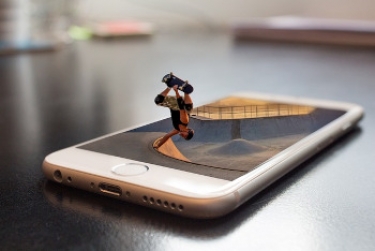 Image by David from Pixabay

Global smartphone shipments fell below the 1.2-billion unit mark in 2022, with the 11% year-on-year drop marking a low point for the industry, according to the technology analyst firm Canalys.

The new year is not expected to see any dramatic change in fortunes for the industry, with only flat to marginal growth predicted and the market outlook remaining tough.

The fall in the final quarter of the year was worse than for the full year, with shipments suffering a 17% hit, Canalys added.

As iTWire has reported, another analyst firm, Gartner, reported a higher annual shipment figure for 2021: 1.4 billion units, driven by a resurgence in the first half of that year. 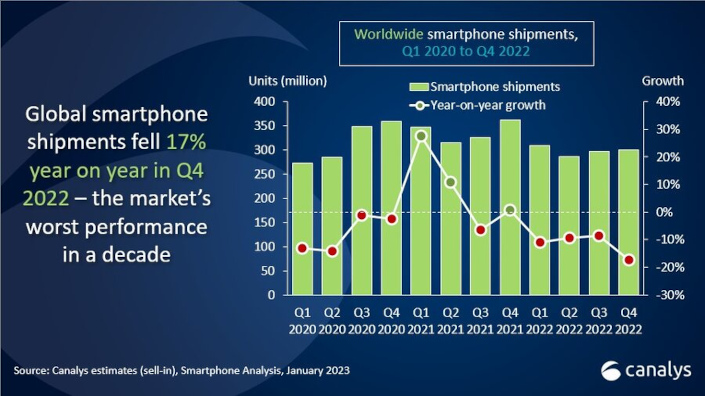 Samsung was second with 20% share, but took the top spot for the full year. Xiaomi took third spot with 11% share in the quarter, while Oppo and vivo came in fourth and fifth with 10% and 8% share respectively.

“The channel is highly cautious with taking on new inventory, contributing to low shipments in 4Q. Backed by strong promotional incentives from vendors and channels, the holiday sales season helped reduce inventory levels. 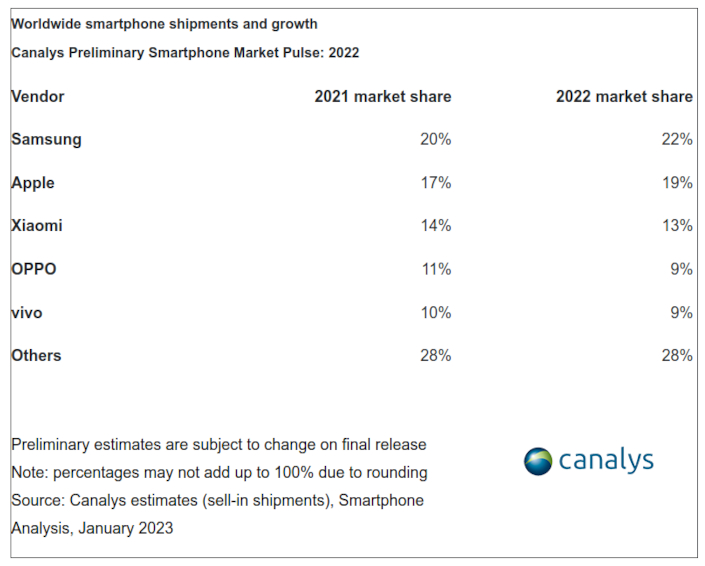 “Vendors are cutting costs to adapt to the new market reality. Building strong partnerships with the channel will be important for protecting market share as difficult market conditions for both channel partners and vendors can easily lead to strenuous negotiations.”

Regarding the outlook for 2023, Chiew said: “Though inflationary pressures will gradually ease, the effects of interest rate hikes, economic slowdowns and an increasingly struggling labour market will limit the market’s potential.

“This will adversely affect saturated, mid-to-high-end-dominated markets, such as Western Europe and North America.

"While China’s re-opening will improve domestic consumer and business confidence, government stimuli are only likely to show effects in six to nine months and demand in China will remain challenging in the short term.

"Still, some regions are likely to grow in the second half of 2023, with Southeast Asia, in particular, expected to see some economic recovery and a resurgence of tourism in China helping to drive business activities.”

More in this category: « Oppo kicks off new year with release of budget smartphone Five mobile games raked in $US 7.2b in 2022, $400m more than in 2021 »
Share News tips for the iTWire Journalists? Your tip will be anonymous