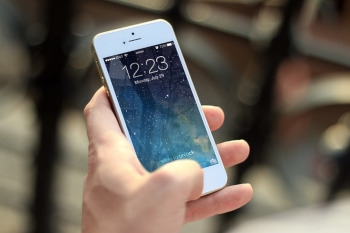 Global smartphone shipments for the first quarter of 2019 showed a drop of 6.8% year-on-year, marking a sixth consecutive quarter of declines, the analyst firm Canalys says, adding that the total number of units shipped, 313.9 million, was the lowest in nearly five years.

Samsung was again the leading vendor though its shipments fell 10.0% to 71.5 million units while Huawei had a 50.2% surge to 59.1 million units.

Of the big names, Apple was the hardest hit, with iPhone shipments falling by 23.2% to 40.2 million units.

"This is the largest single-quarter decline in the history of the iPhone," said senior analyst Ben Stanton. "Apple's second largest market, China, again proved tough. But this was far from its only problem.

"Shipments fell in the US as trade-in initiatives failed to offset longer consumer refresh cycles. In markets such as Europe, Apple is increasingly using discounts to prop up demand, but this is causing additional complexity for distributors, and blurring the value proposition of these 'premium' devices in the eyes of consumers."

Stanton said Apple was also hit by a tough year-on-year comparison against Q1 2018, when demand for the new iPhone X spilled over from Q4 2017. "However, iPhone did show signs of recovery towards the back-end of the quarter, and this momentum will carry into Q2," he said. 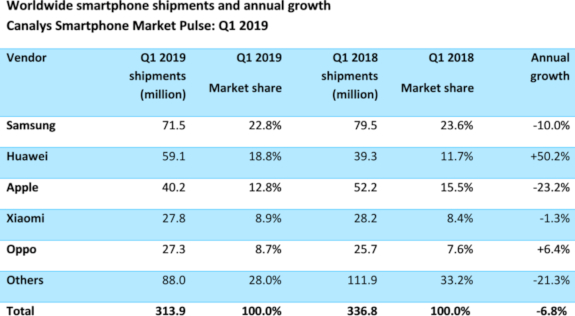 Canalys said the smartphone market was continuing to consolidate as it shrank, with the top five vendors' combined worldwide market share rising from 66.8% to 72.0% over the past year.

Huawei has said publicly that it wants to overtake Samsung as the world's leading vendor by 2020.

"Its foldable phone, the Mate X, may be making headlines, but it will not actually be significant in this battle. Instead, it hinges on Huawei's ability to take customers in the low to mid-range price bands (handsets priced between US$100 to US$300). These models are Huawei's core strength, and there are between 130 and 140 million devices shipped in this price range by its competitors every quarter around the world, excluding the US."

Canalys research analyst Shengtao Jin it would not be easy for Huawei to achieve its stated goal. "Samsung is now fighting back with a revamped A Series and will roll out its new low-cost M Series to more markets around the world in 2019. It is set to defend its position more aggressively, with an explicit focus on hardware," Jin said.

"And other Chinese rivals, such as Xiaomi and OPPO, are starting to emulate Huawei's overseas success. Xiaomi is now the dominant player in India, while both Xiaomi and OPPO are attempting to dislodge Huawei from network operator portfolios in Europe. The smartphone market may be shrinking, but this is only serving to inject the market with more energy. It is more competitive now than it has ever been."

More in this category: « Google adds auto-delete feature for location data on phones IDC says India smartphone shipments up 7.1% in 1Q2019 »
Share News tips for the iTWire Journalists? Your tip will be anonymous