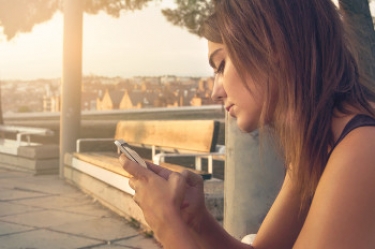 Another company, IDC, said the figure was 286 million units and represented a drop of 8.7%, about 3.5% lower than forecast.

"What started out as a supply-constrained industry earlier this year has turned into a demand-constrained market," said Nabila Popal, research director with IDC's Worldwide Tracker team.

"While supply improved as capacity and production was ramped up, roaring inflation and economic uncertainty has seriously dampened consumer spending and increased inventory across all regions. 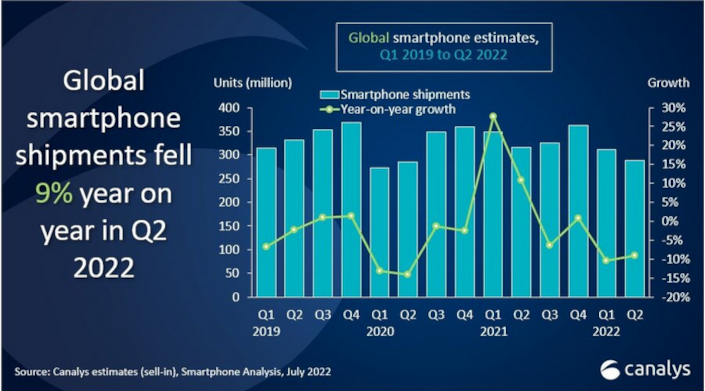 "OEMs have cut back orders for the rest of the year, with Chinese vendors making the biggest cuts as their largest market continues to struggle.

"Although we do expect demand to start picking up in some regions towards the end of the year, the outlook for the 2022 smartphone market will definitely be revised down a few points. We continue to believe that any reduction today is not demand that is lost, but simply pushed forward."

Canalys research analyst Runar Bjørhovde said: "The global smartphone market is suffering a second period of falling shipments after a brief recovery in 2021, and the sudden drop in demand is hitting the leading vendors.

“Despite 6% annual growth, Samsung’s shipments fell 16% on the previous quarter as the vendor struggled with unhealthy inventory levels, especially in the mid-range.

"Samsung is pushing aggressive pricing strategies and heavy promotions for its low-end A series, leveraging the cost-effective ODM production to stimulate consumer demand in the mass market.

"In the premium segment, Samsung stressed its focus on foldable phones and the S series as profit drivers in developed markets. 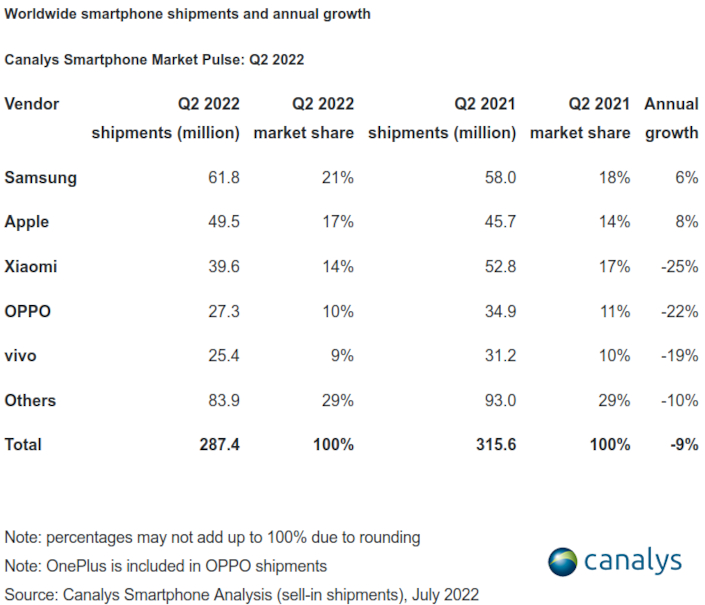 "Meanwhile, solid demand for the iPhone 13 series in North America, China and Europe enabled Apple to grow despite the headwinds. The high end has proven relatively resilient during the recession, while promotions and financing options have helped with affordability."

Toby Zhu, another analyst from Canalys, said: "The major Chinese vendors managed to stabilise their worldwide performance compared with last quarter despite another round of double-digit year-on-year contractions.

“We have seen the top Chinese players focus on very different strategic priorities during the downturn. Xiaomi is ambitious to expand its high-end portfolio in China through its latest partnership with Leica, with new products hitting the market in Q3.

"It has also been adjusting product upgrade cycles to speed up launches in the mass market, leveraging its supply chain capabilities. Oppo managed a steady performance in Europe in Q2, with a year-on-year market share increase, thanks to its significant investment in sponsorships and, more recently, driving sustainability awareness, which has helped to raise its brand profile.

"On the other hand, vivo is adopting a highly cautious yet consistent expansion strategy, with a particular focus on building in-house hardware differentiation, such as ISP chips and cameras. In Q2, the vendor grew steadily in Latin America while recovering its market position in the highly competitive APAC market.”