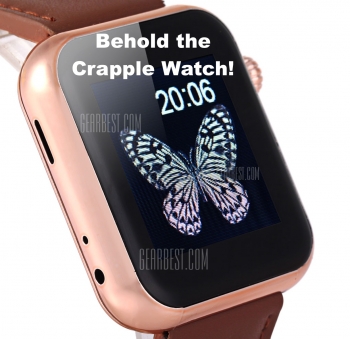 I’m waiting for the Apple Watch, but the Crapple Watch is available now at a tenth of the price, a hundredth of the features and free shipping - but is it any good?

Ah, the Apple Watch. It will revolutionise the wearables industry and do to wrists what iPhones did to hands - give them the most advanced technology that wipes away the competition that you simply must own.

But whenever Apple does something, an attack of the clones is never far behind, even if the clones are sometimes little more than a phantom menace.

Even so, begun they have the clone wars, with a Crapple Watch that’s far more Jar Jar Binks than the new hope that was Luke Skywalker dubbed the ‘AW08 Bluetooth V.1 Smart Watch Dialer Music Anti-lose Pedometer SMS Camera Control’.

As they say, that’s no moon.

Nope, it’s the Crapple Watch, looking for all the world like Apple’s upcoming watch, and which appears to be the same one that Mashable saw at CES for US $27 (which others reported paying US $40 for).

This one, however, can be found at GearBest and plenty of other sites online besides, although GearBest appears to have the best price at US $38.53, which equates to AUD $48.78 or EUR 32.15.

The images at the page are all blatant rip-offs of Apple Watch imagery, but when you take a look at the product shots for the white, orange/gold, brown and white versions, you can see the incredibly ultra low-res colour screen that looks like it came from 1999 - or maybe even 1979.

A pathetically low-res analog clock face is available, as it a digital clock face with shockingly pixellated butterfly, lifted presumably from Apple’s own product shots.

The watch looks for all the world - at first glance - like the Apple watch, complete with digital crown and home button on the right hand side. The back has what appears to be the magnetic induction charging ring, but the four camera-lens-style sensors are missing.

Sadly though this is no induction ring, for on the left hand side of this woeful watch is a speaker, a microphone and a ‘charging hole’ for one of those ‘pin’ style charges - you won’t find a lightning port nor a microUSB charging socket here, but an easily losable charger cable. You couldn't use the force with this thing if you wanted - it may well simply fall apart!

The images appear to show Apple’s new icon design but this too appears to be a scam. I can only wonder whether the factory that makes these abominations is little more than the modern day version of the IP stealing 'Mos Eisley Spaceport', where you will never find a more wretched hive of IP thieving scum and villainy.

The watch lacks all of the cool features of the real Apple Watch and to get a handful of SMS and instant messaging apps to work with the watch from your phone, you’ll need to install a dodgy looking APK onto your Android phone, with iPhone users all missing out.

The device will, apparently, pair with an iPhone for basic call answering, music listening and more, but if you want to use it as a remote camera button, this will only work with Android.

The main appeal of this watch is to prank your friends into believing you have somehow magically been able to get an Apple Watch.

But once they look at it they won’t be fooled for long. This isn't the watch - or watch wearing droids - you're looking for.

In the interests of investigative journalism, I have ordered one of these Crapple Watches to see just how crappy it is for myself, and will present to you, dear reader, a review once it arrives in a couple of weeks’ time.

I expect it to be really, really, REALLY bad, but it’ll be a bit of silly fun until the vastly more valuable and real Apple Watch arrives in earnest.

Unfortunately for Australians, this might not be in late February or early March as predicted for the US, as we discussed in this earlier article - but who knows, we might get lucky! Or we might have to wait until mid-2015.

Until then, the Crapple Watch is a bit like having a plastic dummy of what the real thing will be like, except that it will very badly work with the world’s worst screen.

It’s as anti-Apple as you can get, with the Chinese factory pumping these out having no shame in stealing Apple’s designs whatsoever.

Whether Apple’s lawyers could even be bothered hunting these people down is yet to be seen, because there will be absolutely no mistaking the real thing from the fake, but until then, the Crapple Watch can be yours for just US $38.53 - with free shipping.

Just be certain that the Crapple Watch clearly belongs to the dark side of the force - we may well have to dub it Darth Timer!

More in this category: « iPhone 7 ‘will have curved screen’ VIDEOS: Microsoft stalks iOS and Android with low-cost Lumia 435 and 532 »
Share News tips for the iTWire Journalists? Your tip will be anonymous