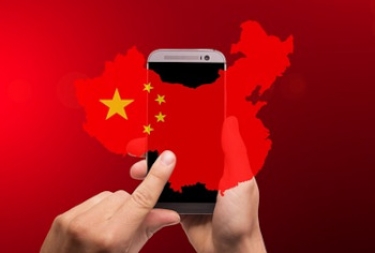 Smartphone sales in China fell by 14% year-on-year in the first quarter of 2022, the technology research firm Counterpoint Research says, adding that a total of 74.2 million units changed hands.

The company said these levels were close to those seen during the first quarter of 2020 when the pandemic was in full cry.

As far as individual vendors went, realme was the leader with 20% of total sales, while OPPO and Apple took 18% apiece.

Honor, the former budget line owned by Huawei and sold to a consortium of traders last year, was the fastest growing OEM, showing 167% growth year-on-year.

Analyst Mengmeng Zhang pointed out that China’s economy grew by only 4.8% year-on-year in 1Q2022.

"[This was] lower than the 5.5% annual growth target set by the government, as the country was weighed down by the pandemic and related lockdowns," she said. 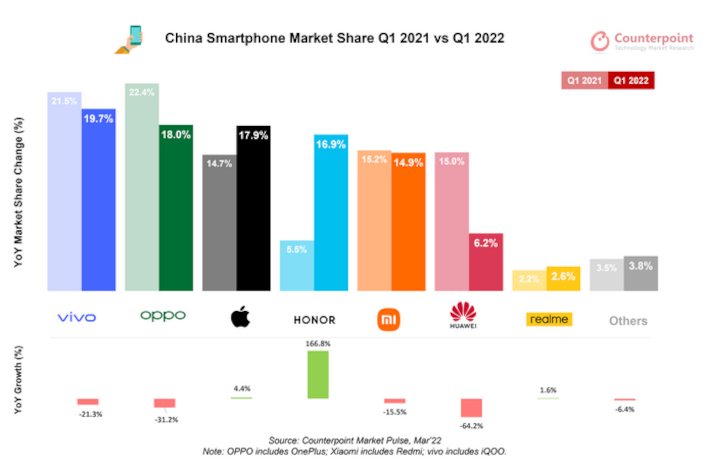 "These factors, combined with the downward demand trend already visible in China’s smartphone market before the fresh pandemic wave, affected the sector significantly.”

Zhang said the declining trend in the smartphone market was seen right through the quarter, with just a small peak during the Chinese New Year holidays.

"We expect smartphone demand to continue to be underwhelming due to weak consumer sentiment and lack of new innovations to stimulate consumers,” she added.

Senior research analyst Ivan Lam noted that vivo had knocked Apple out of the position of leading vendor.

"vivo’s affordable Y series phones, such as the Y76s and Y31s, were also strong performers during the quarter.”

Despite Apple losing its top spot, the iPhone 13 continued to be the best-selling model among all brands. Honor's showing was put down to the popularity of its Honor 60 model.

"During the quarter, Huawei’s clamshell-type P50 Pocket and book-type Mate X2, Samsung’s clamshell-type Z Flip 3 and OPPO’s book-type Find N were the top-sellers. However, due to foldable panel supply limitations and high price points, foldable devices accounted for only less than 1% of the market in 1Q2022.”

More in this category: « Dynabook launches Portégé X40-K, offering portability, productivity, and performance US smartphone sales fell 6% in 1Q22 as demand cooled: Counterpoint »
Share News tips for the iTWire Journalists? Your tip will be anonymous