Android vs iPhone becoming a "one horse race" Featured 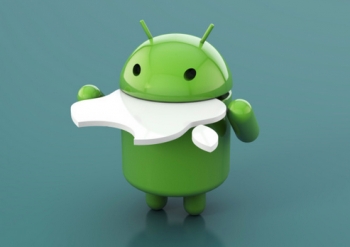 Android smartphones are becoming a seemingly unstoppable force, accounting for 85% of the worldwide market in the second quarter of 2014 according to new research.

Analyst group Strategy Analytics said overall smartphone shipments were up 27% from a year ago to 295 million, with most of the growth in devices using Google's operating system Android.

Apple's iPhone managed to increase sales to 35 million in the quarter, the survey showed, but Apple's global market share fell to 11.9% from 13.4% a year ago. 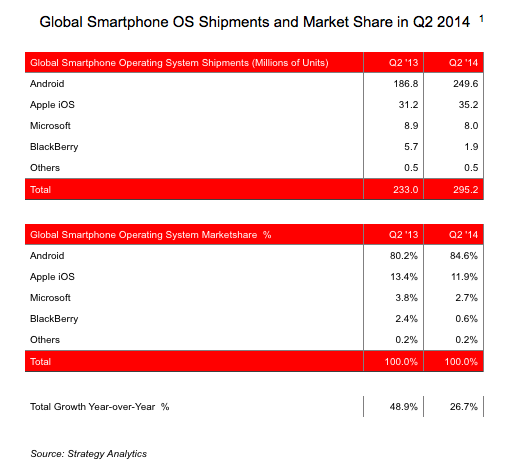 "Android is on the verge of turning smartphone platforms into a one-horse race," said Strategy Analytics executive director Neil Mawston.

"Rival OS vendors are going to have to do something revolutionary to overturn Android's huge lead in smartphone shipments."

And those potentially 'revolutionary' strategic threats? Apple’s “push into the big-screen phablet market” and Mozilla’s continuing efforts in low-cost Firefox mobile devices “are the only major threats to Android’s continued growth at this stage.”

This stalling in innovation is also matched by a slowdown in global smartphone sales.

“Global smartphone growth in the current quarter is at its lowest level for five years, and there are wide variations by region,” Linda Sui, a director at the research firm, notes in a statement.

And Windows Phone isn't doing as well as some are suggesting - Microsoft's Windows Phone sales declined to eight million units in the quarter from 8.9 million a year ago, though this was before it axed Nokia in July.

Meanwhile Chinese smartphone manufacturer Xiaomi has become the world’s fifth-largest brand for the first time ever, and Strategy Analytics described it as a “star performer” for capturing 5% market share, shipping 15.1 million units.

Strategy Analytics noted: “Xiaomi’s Android smartphone models are wildly popular in the Chinese market and it shifts millions of them every quarter through its extensive online and operator channels. Xiaomi’s next step is to target the international market in Asia and Europe, where it will have to invest big money to familiarize western consumers with its unfamiliar brand name.”

And BlackBerry's problems are only getting worse, with device sales crashing 66% to 1.9 million, and market share falling to 0.6%.

More in this category: « Is Apple finally joining the NFC camp? Samsung loses top spot to Xiaomi in China smartphone race »
Share News tips for the iTWire Journalists? Your tip will be anonymous