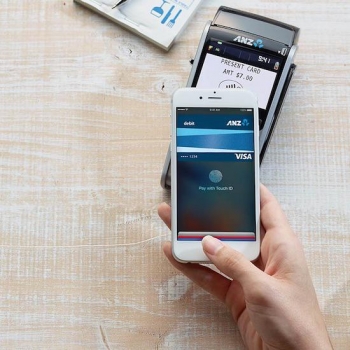 ANZ Bank is the first Australian bank to participate in the Apple Pay digital wallet.

Apple Pay got off to a slow start in Australia, and until now only American Express cards directly issued by that company could be linked to an iPhone.

The consensus of opinion was that Australia's relatively low interchange fee regime for card transactions - around half the going rate in the US - didn't provide room for the percentage fee Apple was seeking from the banks.

But somehow ANZ Bank and Apple have found a way around that stumbling block. No details about that aspect the deal have been released, but it seems likely that Apple has accepted less than the 0.15% it reportedly collects in the US.

Many ANZ Visa and American Express cards can be used with Apple Pay (a full list is here). MasterCard, Access and Corporate cards are not supported.

“The introduction of Apple Pay is a significant milestone in our strategy to use digital technology to provide our customers with a superior experience and will be a watershed moment in the adoption of mobile payments in Australia," said ANZ CEO Shayne Elliott.

Apple Pay was announced alongside the iPhone 6 and iPhone 6 Plus.

It works with iPhone SE, iPhone 6s, iPhone 6s Plus, iPhone 6, iPhone 6 Plus and Apple Watch for contactless payments.

Apple Pay also provides an in-app payment function, which can be used on iPhone 6 and later, iPad Air 2, iPad mini 3 and iPad Pro.

According to ANZ, more than 60% of card transactions in Australia are now contactless.

A recent study predicted 148 million people around the world will make contactless payments via their mobile phones by the end of 2016, with Apple and Samsung accounting for nearly 70% of new customers.

More in this category: « OPPO and JB Hi-Fi team up - R9 on sale from 9 May OPPO’s Australian ambitions – right product, right price, and right place »
back to top