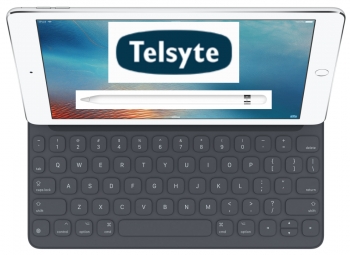 The Australian tablets market suffered another hefty drop in 2015, declining 18.5%. Research firm Telsyte has released its latest study of the shrinking tablets market in Australia, with Apple and Microsoft ‘set to battle it out for touch screen device dominance’ in 2016 as the two-in-one market emerges.

While ‘budget Android device sales’ have dragged down the Austraian tablet sales market for the second year running, Apple retained its market share dominance in 2014 and 2015, growing from 47% in 2014 to 48.7% in 2015, despite total tablet sales dropping from 3.8 million units to 3.1 million units.

In addition, Apple was the only tablet vendor in Telsyte’s study to score a perfect 5 out of 5 star ranking with its stylus and keyboard-equipped Apple iPad 9.7-inch model, although Apple’s 12.9-inch iPad Pro ranked at 4.5 stars alongside Microsoft’s Surface Pro 4, its Surface Book and Samsung’s Galaxy TabPro S.

In its sixth year, Telsyte’s ‘Australian Media Tablet Market Study 2016’ found that despite a second year of decline in total market sales, the research firm ‘believes the market is set to grow again in 2016 as consumer appetite shifts to higher end 2-in-1 (computer and tablet) devices.’

Of course, with Apple’s iPad Pro range now fully fledged 2-in-1 devices (for customers that choose to purchase any brand of add-on keyboard and Apple’s Pencil stylus, as they are optional but recommended), it is a fully paid up member of the 2-in-1 device market.

Telsyte notes that ‘the number of units [in the total tablet market] sold dropping by 18% in 2015, industry revenues grew by 2% due to price rises, and a growing preference for premium products with a higher average sale price.’

Telsyte senior analyst Alvin Lee said that: “The impact of phablets, or larger smartphones, has been mostly towards lower cost smaller screen tablets,”

The sales share of Windows-based tablets almost doubled in 2015 from 2014; however, Telsyte states that ‘the rise of Windows as a tablet platform was not yet enough to offset the overall market decline.’

That said, after a slow start, Telsyte says ‘Microsoft is now realising the tablet opportunity, producing its own Surface branded devices, but also shipping on Windows devices from Samsung (the dominant Android smartphone and tablet vendor) and traditional partners such as Dell and Lenovo.’

Telsyte Senior Analyst Alvin Lee noted ‘Android’s volume strategy is uncertain, and the lack of a “hero” device from Google or other vendors is holding back Android’s tablet potential.’ 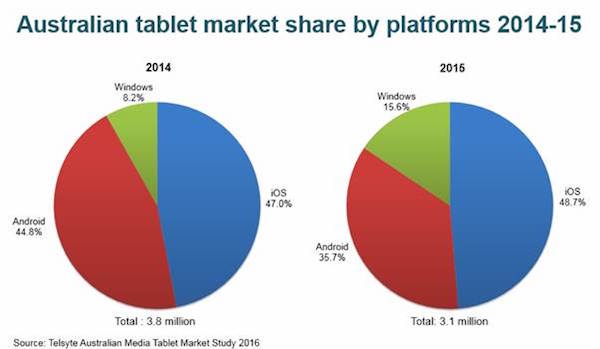 Early adopters of 2-in-1 tablets are also more likely to be business professionals and career driven, according to Telsyte’s technology buyer research.

The study found 2-in-1 users are twice as likely to ‘keep up to date with technology developments’, twice as likely to ‘have used the Internet to share their creativity’ and 1.6 times more likely to ‘want to get to the very top of their career’, than the average Australian (aged over 16).

Telsyte’s Enterprise IT research also indicates nearly half of Australian businesses allow BYOD (Bring your own device) in the workplace, including tablet and notebook devices.

For the first time, Telsyte is releasing its analyst device reviews based on real world testing and analysis of components, application environments, business and consumer features, price, channels to market, design and several other factors. The ratings are considered from a tablet user perspective and some of the results are as follows:

More in this category: « 60 Minutes iPhone hack in 60 minutes Collaboration ‘crucial’ for better regional mobile services, says Vodafone »
Share News tips for the iTWire Journalists? Your tip will be anonymous