US consumers lose interest in smartphones - haven't we all? 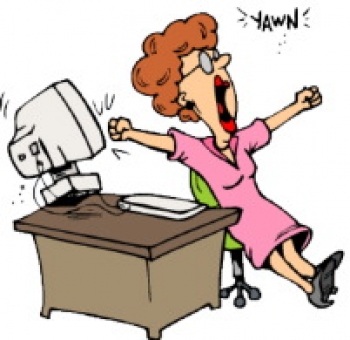 US consumer smartphone demand is plummeting despite the introduction of a number of flagship phones – Apple’s iPhone 6 and Plus and Samsung’s S6 and Edge.

According to Argus Insights its curated analysis of global consumer reviews and social media conversations, provides comprehensive visibility at market, product, and attribute levels to determine what is delighting and disappointing the market. It has a reputation for being right.

Consumers have lost interest in the smartphone market – even Apple and Samsung’s flashy flagship phones could not reverse the trend. New phones are typically a vague improvement on old ones, with better cameras, memory, etc., but these small improvements are failing to create urgency for consumers to upgrade right away. 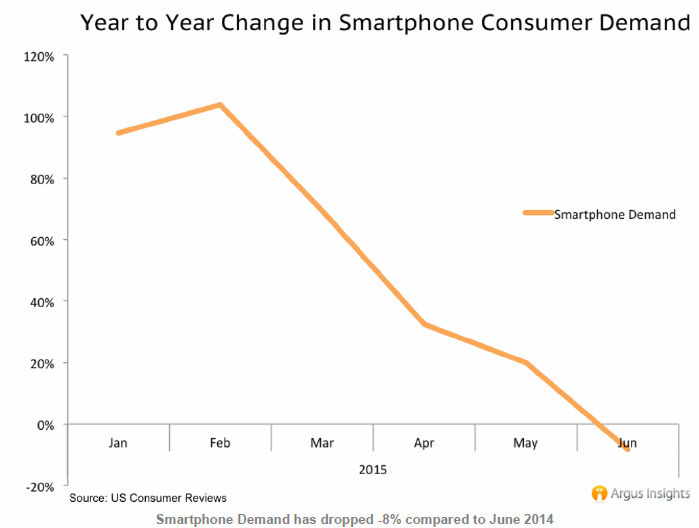 Samsung managed to gain back mindshare in the US market with the release of their flagship Galaxy S6 and S6 Edge handsets in April 2015, but even this high profile release did not boost market demand. Despite the drop in consumer demand, Samsung and Apple maintained their smartphone prowess in a slowing Q2 2015. Their consumer review mindshare within the US smartphone market grew, but only relative to other brands. Samsung secured a large portion of the consumer review mindshare in the US smartphone market, seeing an influx in mindshare corresponding to the time at which the Galaxy S6 and S6 Edge were made available in April.

Apple is the only other major smartphone manufacturer to post mindshare gains in Q2. Though their new iPhones were released back in September 2014, interest continues to grow around the ever-popular iPhone 6. While Samsung is already seeing a stall in mindshare just months after the release of their flagship phones, Apple’s iPhone 6 and even older iPhone 5 continue to promote growth in mindshare. 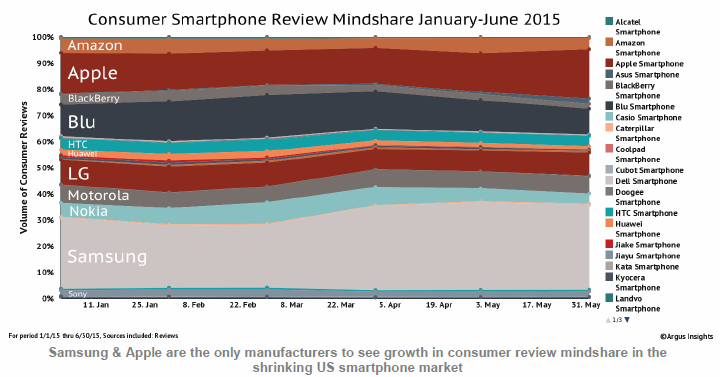 In addition to leading the market in terms of mindshare and demand, Apple and Samsung were ranked among the most delightful smartphone manufacturers. The powerhouse brands saw higher satisfaction ratings from US consumers than all other brands, except for the far less popular Microsoft (Lumia) and Asus. In the midst of shifting away from Nokia branding, Microsoft saw an increase in delight from the few consumers reviewing their Microsoft Lumia 640 and the Microsoft Lumia 535 handsets, crowning Microsoft as the most delightful of the quarter. 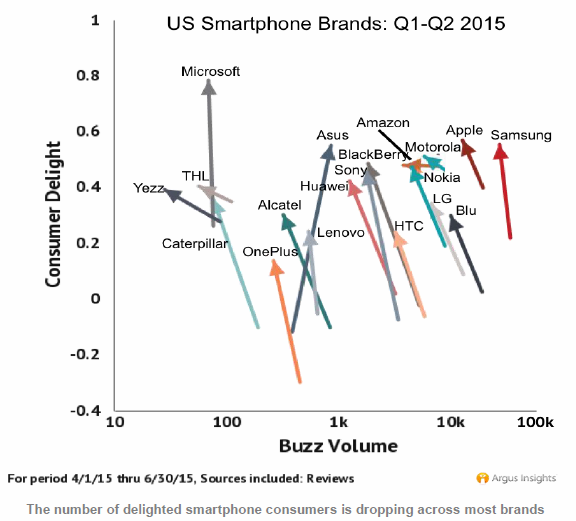 Samsung’s flagship phones failed to challenge Apple for more than a month, even with the aid of extensive in-store promotions. New Galaxy S6 and S6 Edge customers are becoming less satisfied as time goes on while their more obscure handsets are boosting brand delight. Samsung’s Galaxy S6 and S6 Edge launch was another failed attempt to challenge Apple’s smartphone dominance, as consumers are not budging for more of the same. Smartphone manufacturers have yet to present novel features to greatly improve the consumer experience, and until this happens, consumers continue to flock to iPhones.

Opinion – Are we smartphoned out? Hell yes!

Argus results indicate that the great smartphone wars – largely created by Samsung to gain market share – are long over. Western countries at least have reached market saturation and smartphones can and do last at least 3-5 years. With only incremental improvements in looks and features the market is jaded.

Until there is that magic moment where Apple, Samsung, Microsoft or indeed the 1000 or so other smartphone makers can declare that their device does something the others cannot then we will treat smartphones as a commodity to be replaced when they wear out. That is obvious as sales of flagship phones (and iPad and Android tablets) plummet. These bloody expensive $1000 bits of kit may be nice to own but the majority of the world would prefer to spend 20-30% of that and get all the functionality they need.

Recent studies like those from PewResearch and many others say that the phone has become an entry point to the internet. It is now more up to the telco carriers to provide fast, cheap and ubiquitous wireless broadband than the phones to do more – heaven knows what to do with a million apps that will do almost anything you can imagine.

Sales of wearables – especially Apple’s expensive watch – have fallen flat. It seems the prospect of a daily recharge and that they need a smartphone to function has killed them all for now. They did not provide a new value proposition.

Google Glass – a glimpse of the future – was killed off because of privacy concerns. We will see glasses with heads up displays and augmented reality like Microsoft’s Hololens in business and research but these will not be acceptable street wear.

Bottom line – and Argus Insights confirms this – consumer delight, buzz and mindshare equal sales. Samsung, and to a lesser but still significant extent Apple, are failing to win consumers hearts the way they used to.

Argus collects consumer data and applies its algorithms to reveal insights on consumer trends. It has been remarkably accurate in interpreting social media and turning it into data that accurately reflects consumer sentiment and sales. Its strong belief is that user experience correlates to product success

Delight metric based on research from Stanford University on Innovation Metrics

More in this category: « Your own smartphone brand - just US $1000! “One day people will not be able to live without their smartwatch” »
Share News tips for the iTWire Journalists? Your tip will be anonymous