VIDEO Interview with Simon Kantor, ROAM-e on shelves in September 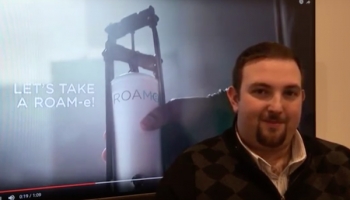 The "world-first" flying selfie stick, the ROAM-e, is now available for pre-order with deliveries due September, and is set to become 2016’s must-have gadget.

The world first learned of IoT Group’s "world-first" flying selfie stick on 1 April, but as it turned out, the selfie-stick was real and the launch was definitely no joke.

It’s the brainchild of Simon Kantor. He is still in his 20s and chief executive of the IoT Group, a company that already sells a range of smartwatches, wearables devices and accessories.

Then I managed to get an interview with a top executive at IoT Group, Ian Duffell, who has decades of seriously impressive results, to tell us more about Kantor’s clever flying contraption, with the article and video interview here.

On 19 June, IoT Group sent some photos out to the media so they could get a sneak peek of a special launch video, with that article here.

Then, at midday (Sydney time) on 28 June, the ROAM-e flying selfie stick officially launched with a globally simultaneous launch video and pre-orders officially starting, too. Full details of that article and video launch here.

Now we come to an interview with Kantor, the young genius who dreamt up with the idea of the ROAM-e with his friends, and who then marshalled the resources and manpower to bring the idea to life, complete with sophisticated facial recognition software and more.

As the gadget is due to land on store shelves in September, I took the opportunity of the launch day to request an interview with Kantor, and which was graciously granted, with that video in full just below. More of the article follows the video!

In the video, I introduced Kantor and welcomed him to the program. I asked him to remind us what IoT Group has already achieved, as well as a bit about his history in the world of tech.

I asked Kantor to share some of his earliest technological memories and the first computers he used, before delving a little deeper into ROAM-e’s history.

We spoke about the idea that sparked ROAM-e into life, the difficulty of creating facial recognition software, questions about the battery, the type of charger, spare battery availability for greater flying times and more.

Kantor explained the various safety features built into the ROAM-e, and we spoke about pre-orders. I wanted to know what it was like working with the Chinese factory, before moving on to great advice that he would want to give to younger and older people watching the video and building the next generation of technologies one day and hopefully emulating his success.

We looked at the future of the industry, Kantor shared some great advice he has received over the years to help him get where he is today, and what his final message in the video interview was to iTWire readers and viewers, and his current and future customers.

More in this category: « FULL VIDEOS: AMD Polaris-powered RX 460, 470 and 480 GPUs launch in Australia Google Impact Challenge closes in 3 days, go ogle $750,000 in funding »
Share News tips for the iTWire Journalists? Your tip will be anonymous