Screenshot of 4Chan post about art sells for $90K on eBay 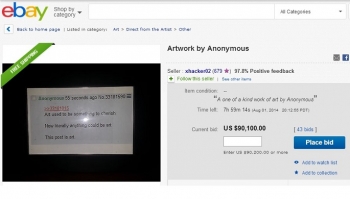 What is art? You might just find yourself second-guessing your answer to that question after a screenshot of a 4chan post dissecting the nature of art earned over $90,900 in an eBay auction.

The auction - for a framed screenshot from message board 4chan - finished mere hours before the end of the potato salad Kickstarter last night.

"Art used to be something to cherish Now literally anything could be art This post is art", it reads.

The bids came from both human and automatic bids steadily pushed the price higher and higher on Friday to nearly $100,000.

Interstingly the auctioned version of the post is clearly a digital photograph of a computer screen, with a camera’s flash reflected in the glass, rather than a pure screen grab. It’s been printed out on “standard printing paper", while the listing’s details explain the work’s subject as “life” and technique as “typing with Copy and Paste.”

The item's condition is simply listed as “a one of a kind work of art by Anonymous.”

There's a bit of concern, especially on Reddit, that the bids are fake (especially given 4chan is not the most trustworthy of Internet destinations), though the eBay listing clearly states, "This artwork will be sold with no refunds accepted".

The lucky winner will receive a printout of the screenshot on standard A4 paper in a frame, while another auction - a screenshot of the eBay listing of Artwork by Anonymous - has collected over $50,000 in bids.

More in this category: « We love to hate our social networks Australian footy 'Alert Shirt' takes out big US award »
Share News tips for the iTWire Journalists? Your tip will be anonymous