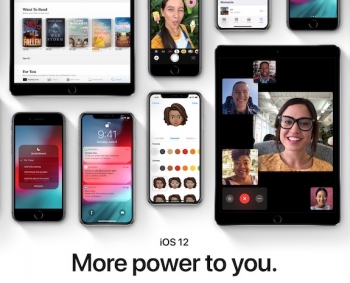 If you've been waiting for Apple to release the first public beta of iOS 12 for iPhones, iPads and the iPod touch, and you've been curious to see the first tvOS 12 beta too, the wait is over.

For the past few weeks, registered Apple developers have been first to play with all of iOS 12's upcoming new features, with Apple's absolutely must-see 2018 WWDC keynote showcasing a plethora of powerful new capabilities.

From Group FaceTime with up to 32 participants through to new Siri Shortcuts that make Apple's voice assistant much more capable, from improvements to the Photos app through to better managing your screen time and notifications, from AR improvements leading to shared AR experiences, through to iPhone X users getting new Memojis and plenty more, iOS 12 is Apple's best mobile OS yet.

iOS 12 even promises to deliver performance enhancements on iOS devices going as far back as iPhone 5s and iPad Air, which will surely bring a smile to the dials of anyone used to older devices getting slower with newer OS updates.

You can see Apple's iOS 12 page here to get a quick visual update on the main improvements, enhancements and new features the update is bringing in the northern fall or autumn and the southern hemisphere's spring.

Apple will also release tvOS 12 when iOS 12 launches in full, which brings Dolby Atmos Audio, further simplification of the authentication process for cable TV apps with zero sign-on via compatible cable networks, new aerial screensavers including a stunning view from the International Space Station and more, which you can read about here.

Apple's public beta for the next version of macOS Mojave hasn't entered the public beta stage yet – we'll inform you when it does.

You can also download the new betas at Apple's public beta site here and a helpful Q&A about participating in early betas is here, too.

Remember – back up first as per Apple's recommendations, try the beta on non-primary devices first, make extra back-ups of your photos and other information and, if in doubt, don't install the beta yet!

While it is possible to go back from iOS 12 beta to iOS 11, anyone who is just an everyday user not familiar with betas should stay away from installing this beta. Maybe in a few weeks or a month or two when the beta has had plenty of feedback and updating, but general folks should wait until the final release, and there will be those counselling you to wait until iOS 12.01, or even iOS 12.1.

For me, however, I'll be jumping in later today, and am eagerly awaiting the opportunity to install the iOS 12 and tvOS 12 betas myself, but only after having had the chance to properly back up the iOS devices I plan on updating.

It's an exciting time for Apple fans, because we're about to enter a new and better normal, with, as always, the best still yet to come!

More in this category: « VIDEOS: Oppo brings the R15 and R15 Pro to Australia with iPhone X-style notch VIDEO: Samsung unleashing Galaxy Note 9 on 9 August unto the world »
Share News tips for the iTWire Journalists? Your tip will be anonymous