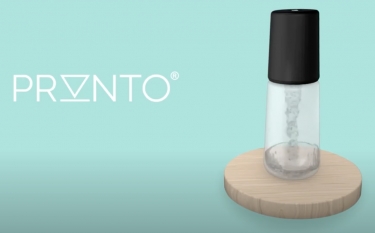 An Australian tech company has re-invented the baby bottle, thanks to a new mother discovering a major baby bottle sterilising paint point which led to her joining forces with the mother of invention to disrupt parenting for the better – with true innovation!

If Apple decided to make a baby bottle, this could well be what it would look like, and perhaps if Tim Cook had been Tammy Cook, Apple might have already made it.

However, it didn't, with new mother Shannon Gilleland being a mother on a mission developing the world's first self sterilising baby bottle and making it sophisticated, sleek and sexy at the same time, which she readily admits aren't the words that would ordinary first come to mind.

Pronto was developed "after three years of research and development, into current products on the market and how parents are forced to use these outdated and ugly methods, and is about to disrupt the market with this high tech baby bottle solution".

And now there's an opportunity to become an investor in this product, before it comes to market, with full details at equity crowdfunding platform service Birchal, here.

Shannon Gilleland found a way to revolutionise the baby bottle market by focusing on the latest generation of parents who are tech savvy and convenience driven.

Before we go on, here's the Birchal Pronto campaign video that explains it all – the article continues thereafter, please read on!

What makes this innovative baby bottle different is that it "uses UVC tech neatly concealed in the bottle, to sterilise the bottle and the water at the same time, completely removing the need to sterilise and pre-prepare multiple bottles, and allowing parents to do so while they’re out and about.

"This frees parents to focus their energies elsewhere, giving back valuable time to their busy schedule and allowing them to do so with style".

Shannon was sick of the boring, outdated products on the market that were visually and physically designed for babies, but didn’t take into account the modern day parents' needs or aesthetics, so she set about solving the problem.

“I hated that my sense of taste and style was dumbed down when it came time to choose a baby bottle for my child,” Shannon continued.

“In a day and age when mobile phones are statement pieces and provide convenience at the same time as functionality, why haven’t parenting products being designed with the same considerations?”

In the modern era we live in, Shannon's right.

After all, she explains that "convenience culture has given rise to an expectation of immediacy in which a fifteen minute wait for a cab is no longer acceptable but spending hours binge watching your favourite series on Netflix is.

"The latest generation of parents are defining new rituals where there is a fluid relationship with technology that removes barriers to every day requirements and the same should be said for feeding a baby.

"Especially now when parents are juggling working and schooling their kids from home. They certainly don’t have the time to waste on the bottle washing and sanitising process! Plus who wants to see the pile of bottles and sterilising equipment cluttering your benchtop in the background of a Zoom meeting?"

This is why Shannon Gilleland and her company, Pronto, decided to revolutionise the parenting / baby tech industry by working on a way to remove all of the unnecessary parts of bottle feeding and giving freedom back to parents globally.

After interviewing other fathers and mothers on how they were travelling with their kids, Shannon found that there weren’t any simple, convenient, or sleek, options on the market.

Everything that existed relied on big, bulky, ugly sterilisation systems that parents were forced to use at home and gaudy outdated bottles that looked like the ones our grandparents had used and you’d rather leave hidden in your bag.

Thinking beyond the impressive Apple style aesthetics, that could slip just as easily into your back pocket unnoticed, Shannon ensured that Pronto "packs a punch" with top-notch features.

That's why Pronto’s self-sterilisation feature is such a winner, Shannon explains. "Whether you’re home or out, the bottle sterilises itself and the water that's added to it (if you’re formula feeding) directly before a baby feeds from it, making it a safer bottle feeding option - no matter where you are!

"To find out more about the genius of how Pronto was developed and how it works, as well as the values behind the company, head to the company's equity crowdfunding campaign on Birchal. Don’t miss out on a unique opportunity to be a part of disrupting the way we parent forever," Shannon concluded.

Some of Pronto's videos are below, with Shannon winning the "MYOB + Silicon Block Pitch Off in Melbourne", too.

Pronto – How to use: