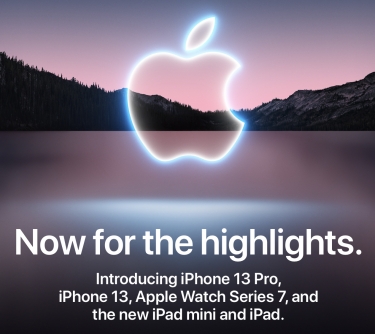 The event the entire tech industry and the world has been waiting for has concluded, with a powerful new entry-level iPad that blows away the competition, a new iPad mini with iPad Air stylings, crazy good new iPhones and the best Apple Watch with biggest screen yet!

With iOS 15, iPadOS 15, watchOS 8 and tvOS 15 due to arrive on Monday, September 20 in the US, which is sometime on Tuesday for Australians, the majority of Apple product owners are going to get a huge upgrade in capabilities and functionality, whether they buy new Apple hardware or not.

See iTWire's article on WWDC 2021 for all the new operating system goodness and to watch the WWDC video which really showcases in excellent detail the new features, which I've been enjoying via the public betas that will soon become full release versions.

The only OS still yet to get an official launch date is macOS 12 Monterey, which we expect to see this month or likely next as Apple launches expected new MacBook Pro models.

But all of the attention is on Apple's new hardware, and despite no folding iPhones as yet, Apple has delivered where it actually counts, with hardware, software, design, battery and sheer power.

Here's Apple's one hour and 20 minute September 2021 keynote, which has ALL the details you need to know right now, and you'll definitely enjoy watching this!

Now, before I get to the new iPhones, iPads, Apple Watch and Apple Fitness+ features, benefits and prices, one of Apple's biggest competitors, with the only ecosystem that even starts coming close to the Apple colossus, is Samsung, and that company has recently launched its new Fold3 and Flip3 models.

What is better value, a two-in-one folding smartphone tablet from Samsung, or a separate iPhone and iPad?

For example, you can get a Samsung Galaxy Z Fold3 5G, and have a device that transforms from smartphone into tablet, with the 256GB model in Australia costing $2499, or $2649 for the 512GB model.

If you actually want a smartphone and a tablet, would you prefer one device, or two? Two distinct devices linked via Apple ID and iCloud, with a million iPad-specific apps in addition to the two million iPhone apps?

What about double the battery life? There's a LOT to be said to having two distinct devices that are at the top of their game!

Want something bigger than an iPad mini or Samsung Galaxy Fold3 screen size without breaking the bank? Even Apple's new "entry-level" iPad is astonishingly powerful, astoundingly affordable, and has access to the same one million iPad-specific apps that Android tablets can only cry into their cornflakes about not having.

Of course, you can get the iPhone 13 Pro and Pro Max for even more power, with the Pro models costing more than the iPhone 13 and 13 mini, but with Apple's newest devices sporting the A15 Bionic, which absolutely blows away every Android processor on the planet - I'll bet that many people will find two is vastly better than one - and you can use both at the same time!

Even Apple's still-on-sale iPhone 12 and 12 mini model are massively powerful compared to most Androids, and are now cheaper too, as are the iPhone 11 models, so there's plenty of choice at a big range of price points for everything Apple, right down to widely available refurbished iPhones from the 6s up that will run iOS 15 perfectly well, at incredibly affordable pricing.

Apple started with the new iPads, with the full Apple press release on the 9th-gen 10.2-inch iPad here, and the awesomely expressing iPad page at Apple here. 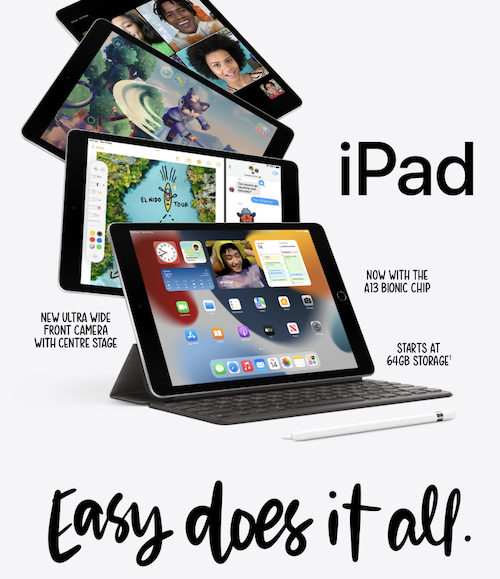 Featuring the new "Centre Stage" front facing camera that is like having a camera person filming you as you move around, whether you're using the in-built camera app, Zoom, TikTok or something else, the new 9th-gen iPad delivers an absolutely incredible amount of power, starting at just AUD $499, and now with 64GB as standard.

Yes, the price can go up if you buy an Apple keyboard or Apple Pencil, but with the biggest and most impressive ecosystem out there, finding alternatives to Apple's own accessories is effortlessly easy - and even more affordable.

With better cameras, a TrueTone display, iPadOS 15 and so much more, including up to 10 hours of reliably battery life, this iPad is going to fly off the shelves, and its starting price of $499 doubles the storage with so many other improvements, it's amazing Apple can pack so much inside so affordably.

Then there's Apple's great new iPad mini, with the press release here and the full, expressive web page here, and you have a device that looks like a mini version of the 2020 iPad Air, with an 8.3-inch screen, but better specs!

You get the same Touch ID in the power button, but you get the A15 Bionic processor, the Centre Stage camera, full Apple Pencil 2.0 support and more, including the ability to work on 5G network. It also welcomes USB-C, which is great!

Coming in multiple colours as you'd expect, this is a premium iPad experience in its smallest expression, and with its starting at $749 for the 64GB Wi-Fi model, this too is going to sell like hotcakes!

Ok, so right out of the gate, Australians will be disappointed to discover that the Australian versions of these phones still don't support mmWave 5G in Australia, so this will presumably be something we'll see with the iPhone 14 models in 2022.

That said, although Telstra has the biggest non-mmWave 5G footprint of all, with Optus slowly catching up and Vodafone needing to really get a move on with, there just isn't that much mmWave 5G coverage in Australia as yet.

Given it obviously costs Apple extra to include 5G mmWave chipsets in phones for countries that won't have a great deal of mmWave coverage over the next year, it was obviously a business decision.

However, there are still TONS of great features on all four models. We have excellent camera upgrades with the new "Cinematic Mode" filming capability, faster CPU, GPU and NPU processors, more battery, brighter screens, double the entry level storage on the iPhone 13 models and a new 1TB option with the Pro models, amongst other amazing features, and you have the very best iPhones yet!

Now, granted, there is no wireless reverse charging you can do for other people's phones or devices, and my wish for Pencil support for iPhones is not yet granted, although every iPad is stylus capable.

The iPhone 13 and 13 mini press release is here, and the webpage with all the glorious graphics and details is here.

The iPhone 13 Pro and 13 Pro Max press release is here and the powerhouse webpage that unveils it all graphically is here.

All four new iPhones also have a smaller notch, so the notch hasn't disappeared yet, but it is getting smaller.

The new Cinematic Mode on all four new iPhones is one which delivers the technique that filmmakers called rack focus — shifting focus from one subject to another — to guide the audience’s attention in their movies.

iPhone 13 models makes it easy for anyone filming video to bring the same storytelling technique to their video creations.

iPhone 13 Pro models will be able to film in ProRes 4K video at 30fps as well, making the iPhone 13 Pro and Max true end-to-end movie studios, limited only by your own imagination.

Here are two Apple videos that talk about the fully pro video capabilities:

And here's the second:

The Pro models also have a new screen which offers up to 120Hz frame rates for ultra smooth scrolling, while also being able to cycle down to 10Hz as needed to preserve battery life, while also being brighter.

I personally cannot wait to try out the new iPhone 13 Pro Max and record video with it!

Coming later this year, here's the press release and here's the web page.

Although rumours suggested the Apple Watch Series 7 would have flat sides like the iPhone 12 and 13 models, that could have been a bit of clever misinformation from Apple to ferret out leakers.

Instead we get a refined version of the existing design, one that is barely bigger than before, but which, on the Series 7, delivers nearly 20% more screen space over the Series 6 by reducing the borders by 40%, This is over 50% more screen area that the original Apple Watch through to the still-on-sale Apple Watch Series 3, so this truly is BIG.

Apple Watch Series 7 now has a tap and swipe-capable new QWERTY keyboard on its screen when typing messages or other info, although you can still use scribble or voice dictation, with the watch an incredible 70% brighter indoors, with 33% faster charging than Series 6 to go from zero to 80% in 45 minutes, while 8 minutes of charging before bedtime is enough to deliver 8 hours of sleep tracking.

The 50% thicker front crystal is more crack-resistant than ever through a studier, redesigned flat base, it has new IP6X certification, has WR50 water resistance - and more!

Finally, Apple has expanded Fitness+ with workouts for every fitness level, from 5 mins to 45 mins, new Meditation sessions and, later this year, expanded availability to 15 new countries.

The press release is here but the video below has all the important stuff you need to know.

Android makers will be starting up the photocopiers in their R&D departments, with Apple's sales super cycle just receiving a massive boost that will make competitors quake in their boots.

Forget Christmas - this is the most wonderful time of the year - although with all this Apple goodness on offer, it may well be the most unforgettable Christmas for a lot of lucky recipients yet!

More in this category: « Sonos beams up Gen 2 Beam soundbar for superlatively smooth sonic escapades The new 8.3-inch iPad mini - it's practically an iPhone Mega! »
Share News tips for the iTWire Journalists? Your tip will be anonymous