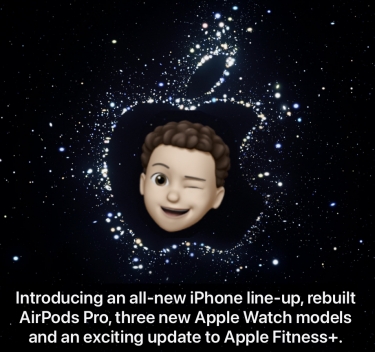 Apple's September bounty from its R&D orchard has delivered the most advanced smartphones, wireless earbuds and smartwatches Apple has ever made, predictably going beyond the more incremental upgrades of competitors to deliver truly new features, products and interfaces.

Many consumers keep their devices for three or more years, and while there are absolutely big leaps in performance, technology, features and benefits as is the case every year, and this year even more so than ever in huge ways, those who only upgrade every few years are really in for a treat in 2022.

Here's Apple's sub-minute taster video of the biggest announcements, but do yourself a favour, put aside 1.5 hours and watch Apple's September keynote just a little bit below the following video. It was once all just science fiction, but Apple specialises in science fact movies with tech you can go out and buy now, rather than forcing you to wait for the 24th century.

Here's the ultra short taster video, the full version is just below that.

Ok, so you watched the video above and want to know more. Well, the full, must-see launch event is immediately below. Apple continues to put more effort into all of its videos than various competitors put into their entire product lines - just take a look for yourself!

The Apple Watch Ultra is spectacular - this video explains it all.

Then there's the Apple iPhone 14 Pro and Pro Max models.

These are Apple's most advanced iPhones yet, and they not only give the notch a chill pill, but they embrace that gap and turn it into a dynamically changeable notification area on steroids, doing things no other phone manufacturer has thought of. It really is remarkable that Apple thinks up these crazily cool innovations, I really don't know why the Android world just doesn't have the same kind of imagination.

The iPhone 14 Pro product page is yet again the world's most dynamic brochure, copied by many (like the iPhone) but never bettered, except by Apple itself.

Prices seem to effectively be the same as last year's models, so while inflation must surely be biting Apple (as it is everyone), the company has the industry's best margins for good reason - they not only help Apple fund the future, but they give Apple incredible pricing flexibility when it counts, which is right now.

Dramatically better cameras (including a 48 megapixel sensor with quad pixel sensor that merges four pixels into one, with much better light capture, and a ProRAW capability that can take advantage of the entire 48 megapixel array, with larger sensors than ever), along with the equivalent of four lenses (thanks to the addition of a 2x optical zoom equivalent, which is in addition to the traditional 0.5x, 1x and 3x lenses), 2x better low light quality on all cameras, autofocus on the front facing camera, better cinematography mode capability, a new action cam video mode that does away with the need for a gimbal, a much better and brighter screen, the fastest A16 Bionic processor and tons more, it's all here.

Well, except for 5G mmWave capability, Apple has kept that for its US models (which now come with no physical SIM slot at all), but in Australia, we don't get 5G mmWave for the third year running, although I'm guessing we still have a physical SIM slot.

There's also the new satellite text messaging connectivity for the four iPhone 14 models, with the catch that this will only be available for the US and Canada at first, and with the first two years of connectivity free of charge. The feature will presumably be rolled out to the rest of the world, but there's no timeframe on that yet, but at least that feature is coming, and will one day be standard for all phones, not just iPhone 14 and newer models.

In any case, and whatever brand that case may be, Apple's iPhone 14 Pro and Pro Max video does the job of showcasing all of the new features and benefits much more elegantly than mere words can express, so check it out for yourself now:

Here too, the iPhone 14 range gets the upgraded A15 Bionic processor from last year's iPhone 13 Pro range, it gets better cameras, 2x better night mode photos, the same action mode for videos hat negates the need for gimbal, the longest battery life for the regular iPhone model and more, this is the affordable iPhone range for everyone, while bringing back the Plus size for people that prefer larger phones, without the Pro Max price tag.

There's so many more features, they're all explained in the link above and at the keynote video above, but if you're on an older iPhone, whether older or newer than the 6s, and you want a brand new phone rather than a older but newer to you refurbished model, the iPhone 14 range will certainly be very tempting, especially at the 12, 24 and 36 month phone plans that the carriers offer.

Rounding out the new hardware is the first new Apple AirPods Pro model in something like three years.

These second-generation AirPods Pro have up to twice the noise cancellation, a new adaptive transparency mode than adjust over 40,000 times per second so really loud noises like construction sounds are muted and aren't blasting your eardrums, they have 6 hours of listening time and 30 hours with the case, with the case able to be charged by your Apple Watch magnetic charged, via MagSafe and Qi charges, and with the case now having a speaker for easy finding with Find My, but also to alert you when the battery is low, and when you're charging.

There's also a new fourth tip for the AirPods Pro, a new "extra small" size to go with the small, medium and large tips, for an even better fit, while a new H2 chip means faster operation and enables all of those audio experiences, including the addition of personalised spatial audio to precisely match your ears, in conjunction by scanning with your iPhone's camera.

Those who thought Apple would do away with the stems were totally wrong. Apple has kept the ability to squeeze the stems to pause and play, activate transparency or activate Siri, but for those like myself that wondered why you couldn't slide your finger up and down the stems to change the volume? Well, now you can do that, too.

They'll retail for $399 and are coming September 23, with pre-orders starting September 9, with free engraving if purchased from Apple, and even the ability to engrave a Memoji onto the case.

Apple doesn't have folding screens. Undeniably extremely cool though they are, and even though they have the shallowest screen crease yet, Apple clearly doesn't think they're ready for its user base yet.

Samsung has worked hard to create use cases for the folding screen tech, but is it truly necessary? No. Does it look incredibly cool? Yes! But do you really need it? No.

An iPhone with a chip faster than any Android chip, with a better resale value, a more consistent user interface and experience, the richest App Library, the most diverse ecosystem of accessories and more is more important to more people.

So too is the strongest ecosystem of interoperability that Apple has between all of its products. Samsung and Huawei come closest, with Google aiming to emulate it as much as possible with its Pixel 6 range, its Pixel buds, Android 13's ability to do what Apple did with Continuity and Handover from years ago, and Google's as yet unavailable Pixel tablet, but Apple is still the very best in this regard and competitors still have a very long way to go to truly catch up.

Even Apple's older iPhone, Apple Watch and iPad models, available at great prices via companies who refurbish tech, including Apple itself, are great alternatives to the vast majority of Android alternatives, so even if you upgrade to older Apple tech that's still newer than what you have now, you'll be doing yourself a favour.

Don't forget iOS 16 should now shortly be available. I've been running the beta version for the past few weeks, and it is the most polished and capable iOS version yet! WatchOS 9 is also here, with iPadOS 16 and macOS 13 due in October. You might want to wait for iOS 16.1 or watchOS 9.1, or maybe the 0.1 versions, but for me at lesat, they've been really great ew operating systems.

So, no folding screens... yet... no 5G mmWave, which isn't widely available in Australia yet anyway (and which the iPhone 15 will hopefully finally deliver to Australians next year, but who knows), no 8K recording, no 2TB option, no 5x or 10x optical zoom to take moon photos, no Apple stylus for the iPhones, no iPad mini that folds into an iPhone, and no satellite connectivity for anyone outside of North America.

There's also no WiFi 6E, but there is Bluetooth 5.3. Other articles will uncover what else the new tech doesn't have, but what it does deliver in 2022 is not only a big leap from last year's iPhone 13 models, but is a giant leap for humankind when compared to the all the iPhones, Watches and AirPods from years gone by.

And with all of these advancements, one can only wonder what technological marvels are already well in development for the iPhone 15 due next year, but if it's time for a new iPhone, Apple Watch or AirPods, the 2022 models are truly remarkable.

Indeed, the only buyer's regret you'll get is if you don't buy them for yourself, and it's very rare than you can say that!

So, please watch the full keynote above, and this article ends with the letters Apple CEO Tim Cook has received outlining the various ways Apple Watch has saved the lives of its owners in a variety of scenarios, which is truly impressive.