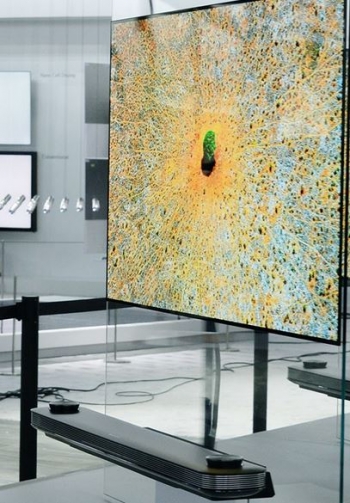 LG wowed audiences at the Consumer Electronics Show with a new 77” W7 “Picture-on-wall” using its latest OLED panel that is just 2.57mm thin and mounts flat to any wall using micro-thin magnetic brackets. The effect is like looking out a window and it received the CES Best of Innovation award. 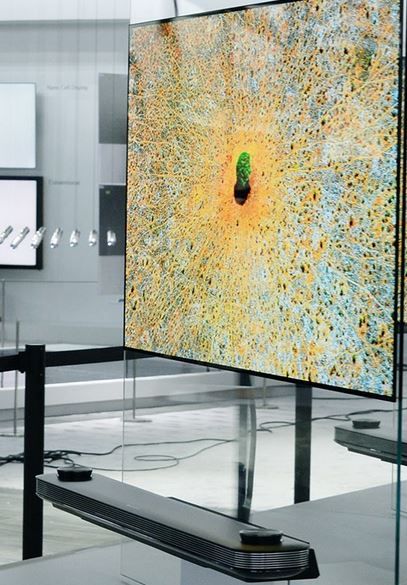 Brian Kwon, president and CEO of LG’s Home Entertainment Company, said, “With Dolby Vision and Dolby Atmos integrated tightly into our newest OLED products, viewers will be able to recapture the magic of the cinema and experience their favourite movies with their original clarity, depth, and imagination intact. The stunning new TVs on display at CES demonstrate our commitment to innovation and leadership in OLED and the premium TV market globally.” 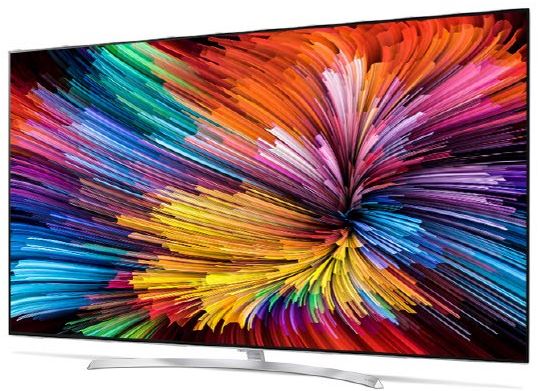 Brian Kwon, president of the LG Home Entertainment Company, said, “Our 2017 SUPER UHD TV line-up with LG’s proprietary Nano Cell technology is a breakthrough in display technology that advances the LCD TV viewing experience to a level unlike any other. Nano Cell is another example of how LG is innovating and pushing the boundaries of display technology to meet the evolving needs of our customers.”

And a 4K, Dolby Vision and Atmos Blu-ray too

It has two HDMI ports (HDMI 2.0a port for Ultra HD video output and an HDMI 1.4 for audio output that can connect with hi-fi devices), Ethernet and Wi-Fi connections for streaming content via Netflix and YouTube, and a USB port allows for playback of movies, pictures and music.

“The LG UP970 Dolby Vision-capable Ultra HD Blu-ray player is an excellent example of our commitment to offering an amazing home HDR viewing experience to our customers,” said Brian Kwon, president of the LG Home Entertainment Company. “We are proud to have an innovation partner such as Dolby to enhance our OLED and Super UHD TVs with their superior technology.”

The word “audiophile” snuck into the press release this year so LG has a lot to live up to. It previewed the new SJ9 Dolby Atmos SJ9 sound bar including two powerful up firing speakers – to envelop the listener from every angle.

Dolby Atmos delivers moving audio that can be precisely placed anywhere in three-dimensional space, including overhead, to create realistic sound for a more immersive experience. Sounds are represented as independent objects by using metadata to describe the location and size of individual audio objects in the 3-dimensional listening space. These audio objects are rendered in real-time such that each sound comes from its designated location, even directly overheard the listener.

Next is the SJ838mm thin sound bar that can replace the stand on certain 2017 LG TV models. It has 4K sound and pass-through and Chromecast.

Finally, is the SJ7, a 320W sound bar that can be positioned either horizontally or vertically due to its split bar design. The two halves of the SJ7 connect wirelessly together. One of the halves has a built-in battery allowing it to be used as a rear speaker or in portable mode as a wireless Bluetooth speaker.

The LOUDR CJ98 can generate 3,500W of powerful sound, instantly creating a lively club-like atmosphere. its Party Thruster allows the DJ to slide a throttle forward to control the build-up of a dance track to perfectly time the bass drop and lighting effects. It has an array of controls, looping buttons and sharing feature. Karaoke fans will use CJ98’s diverse range of vocal effects and the Karaoke Star feature, which suppresses the vocals from songs and allows singers to change the audio track’s key.

The LOUDR OJ98 is another stylish all-in-one speaker system designed to boost the party atmosphere, using a folded horn design hidden inside its chassis to efficiently produce acoustic pressure. The OJ98’s Sparkle Lighting pulses and reflects light in rhythm to the music. To add excitement to any party, the OJ98 is equipped with the Party Kick Starter feature which simulates the sound of a revving race car engine. Designed specifically for DJs, the OJ98’s 109cm height is optimized to put Party Thruster and other controls within perfect reach.

LG has also released a portable party audio system model FJ7, designed to maximize portability and 400W high output sound without distortion. – it has convenient handles and wheels to make it convenient to take the music wherever the event may be.

Brian Kwon, president and CEO of LG’s Home Entertainment Company, said, “LG’s exciting 2017 audio line-up features powerful sound capabilities and sophisticated designs for all consumers, from audiophiles demanding absolute sound fidelity to more casual listeners. The stunning new audio products on display at CES this year demonstrate LG’s commitment to offering a diverse range of audio products that are perfect for any place and any occasion.” 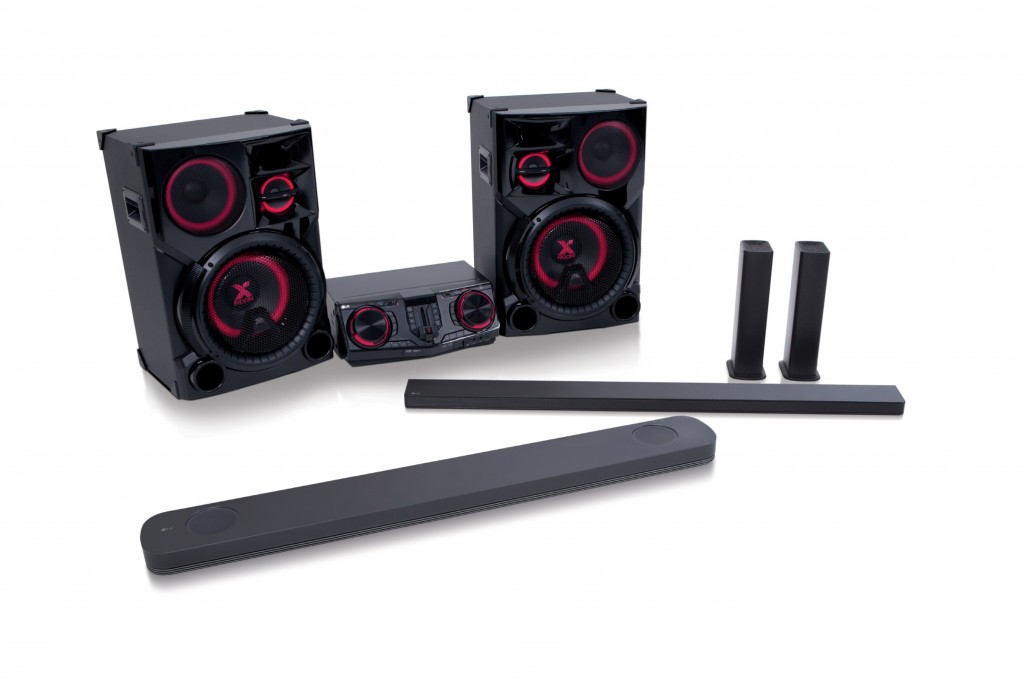 And a levitating speaker

LG showed its futuristic Levitating Portable Speaker (model PJ9). The wireless speaker hovers in place over the accompanying Levitation Station to deliver high-quality audio while making quite an impression. The versatile speaker gives users the ability to seamlessly play music, podcasts and other audio content in the home as well as outdoors.

At the core is a 360° omnidirectional speaker with turbine blade-inspired design and deep bass subwoofer embedded inside the Levitation Station. The PJ9 also features Dual Passive Radiator technology to reproduce flush mid-range tones and crisp highs.

When its 10-hour battery begins to run low, it automatically descends to the Levitation Station and begins to charge wirelessly without listener intervention. It is IPX7 for outdoor use. It has Bluetooth Multipoint to connect to two Bluetooth devices simultaneously.

Brian Kwon, president and CEO of LG’s Home Entertainment Company, said, “Our latest addition to our growing line-up of premium wireless audio devices is not only eye-catching but also communicates the message that LG is serious about bringing something different to the table. We are absolutely dedicated to exploring new concepts and to pioneering innovative designs for its advanced audio products for consumers around the world, and the PJ9 is the latest example of this commitment.” 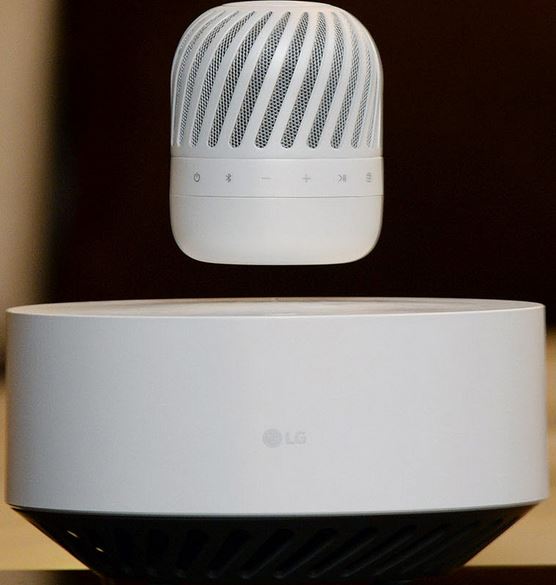 More in this category: « LG brings webOS and Alexa to smart fridge LG shows off intelligent robots for home and work »
Share News tips for the iTWire Journalists? Your tip will be anonymous