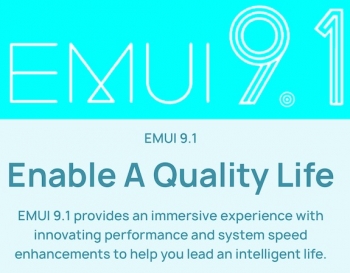 Owners of the P30 and P30 Pro smartphones have already been enjoying the various benefits and features of the EMEU 9.1 operating system with Android 9 Pie for several months, and now it's time for owners of a range of older Huawei smartphones to start enjoying the benefits of "a faster, smoother and smarter smartphone experience".

The update shows Huawei's commitment and support of and to its customers, despite fallout from the US and China trade war that has seen Huawei caught in the metaphorical crossfire, and is a clear sign that Huawei has every intention of fighting the fight to win the hearts and minds of its past, present and future customers worldwide.

EMUI 9.1 is Huawei's custom-made OS based upon Android 9 Pie, the 16th version of the Android mobile operating system, with the company stating that EMUI "provides an immersive experience, with innovative performance and system speed enhancements to help customers lead a more intelligent life".

As a user of EMUI 9.1 on a P30 Pro myself, I can attest to the fact EMUI is indeed a great version of the Android 9 Pie operating system, with a raft of useful features that improve upon stock Android, right down to the ability to swipe at either the left or right hand side of the screen to go back, similar to the way Apple's iOS lets users swipe from the left side of the screen to go back.

Although P30 and P30 Pro users have enjoyed EMUI 9.1 since the launch of those models earlier this year, the Mate 10, 20, 10 Pro and 20 Pro, and the Nova 3i and 3e will finally get this update from mid-July, with the P30 lite set to get the update in August.

Huawei also notes that it will "continue to provide ongoing Android services and security updates to ensure all customers can have the best possible experience on their Huawei smartphones".

Huawei Australia's Consumer Business managing director, Larking Huang, said: “Our customers come first, and we are pleased to be delivering an improved user experience for Australians with the EMUI 9.1 update.

“The update provides time-poor and tech savvy users with an even more streamlined and secure experience by introducing the latest Android security patches along with a new and improved gaming experience, courtesy of GPU Turbo 3.0.

“Other improvements include a smoother user experience when customers use HUAWEI Share OneHop - which enables the easy transfer of content between the smartphone and PC - and an increased number (500 to 1,500) of scene recognition capabilities with the Master AI camera mode, elevating all Aussies’ photographic experiences.”

So, what are some of the key improvements you'll find in EMUI 9.1?

"Simplified settings menu, removing multiple steps and hiding complexities for an effortless user experience. It also features new wallpapers and themes reflecting scenes of nature, and the app icons have been redesigned to be more realistic."

"GPU Turbo 3.0 improves the mobile gaming experience by supporting more games than ever before, while also reducing the screen touch response delay by 36% and optimising the system performance for uninterrupted play."

"Previously, the F2FS file system was tailored for flash memory to improve the read and write performance after long-term use. Now, with EROFS, the random read speed will be 20% faster and the system space will provide extra personal storage of up to 1,000 pictures or 500 songs. Plus, the read-only memory design isolates outside interference for added security in your system files."

"A simple tap from the phone to a connected Huawei PC makes it possible to transfer pictures, videos and documents in seconds with Huawei Share OneHop. Users can also efficiently copy and paste documents between devices, as well as record their PC screen on their phone to capture a 60 second clip which is saved to the device for quick sharing."

"Users simply tap their phone on their PC to transfer photos, videos and documents between devices wirelessly. Transfer speeds are up to 30 MB/s."

"Users shake their phone and tap it on their PC to record the PC screen automatically for 60 seconds. The recording will then be saved to their phone for quick sharing."

"Users can copy the text content on one device, which is then made available to paste on other devices (Huawei phones, tablets, PCs) instantly."

Check SETTINGS, then SYSTEM and then SOFTWARE UPDATE to see if any updates are waiting for you!

More in this category: « Apple retains lead as full 2018 smartwatch figures come in VIDEOS: A good sign for Huawei as StorySign campaign wins seven awards at Cannes 2019 »
Share News tips for the iTWire Journalists? Your tip will be anonymous