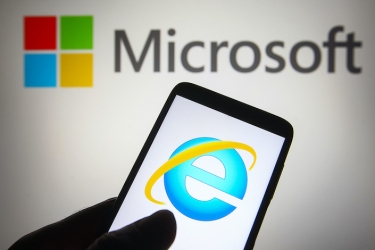 After 27 years, Microsoft has finally killed its once dominant web browser, Explorer, an announcement that is not likely to cause much concern among the majority of internet users, who have long since abandoned the product.

In 1995, shortly after the release of its landmark GUI operating system Windows 95, Microsoft released one of its few free products Internet Explorer in a move that basically killed off its burgeoning online rival Netscape and its Navigator product.

Microsoft founder and boss Bill Gates was known to be deeply concerned about the company's lack of an internet strategy and frightened by the rise of Netscape.

So in a call to arms, Gates issued an internal memo to staff saying that Microsoft had to "spin on a dime" and meet the challenge posed by the internet.

A couple of months later the free Internet Explorer browser was born and incorporated into all subsequent releases of Windows.

Not too much longer, with its nascent business model completely obliterated by Microsoft's new free product, Netscape was no more.

With the announcement of Explorer's demise, Microsoft will no longer offer fixes or updates to the existing version and users will be directed to its replacement, Microsoft Edge.

"Internet Explorer (IE) is officially retired and out of support as of today," Microsoft wrote in a blog post this week.

Underlining the fact that not many will care about the demise of Explorer or for that matter the fate of its replacement Edge, Microsoft's share of the browser market is relatively miniscule these days, being in the single digits.

By comparison market leader Google Chrome has nearly 65% of the browser space.

BACK TO HOME PAGE
Published in Home Tech

More in this category: « MUST WATCH KEYNOTE: Apple WWDC 2022 - new Macs, massive OS upgrades for iPhone, iPad, Apple Watch, CarPlay and more! Watch your health with the new Huawei fitness range »
Share News tips for the iTWire Journalists? Your tip will be anonymous