Big Apple Buddy: new luxury service to buy from the US 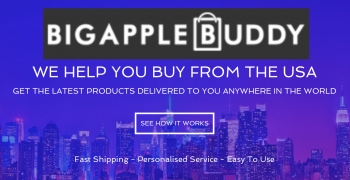 Claiming to be unique in the e-commerce space with a white-glove service to help busy professionals buy the latest tech gadgets, here is Big Apple Buddy!

With the Australian dollar so low compared with the US dollar, launching a US buying service at this time might be a bold move.

That said, prices in the US can still be fantastic compared to what we end up paying in Australia, and many products are launched in the US first, although with exchange rates to take into consideration, you need to be different to stand out in this space.

After all, there are services such as PriceUSA which have for years helped Australians buy from the US, while Cuzin, which started late last year, also offers a similar service - see my iTWire article complete with video interview with Cuzin's founder for more detail.

So, what do you have to do to stand out?

Big Apple Buddy believes it is through the provision of a luxury service, especially given that the luxury service concept needs no introduction.

We’re told that it ‘serves a defined market and functions with an exacting set of rules: luxury hotel concierges, business class stewards on airplanes or high-end store salespeople are specifically trained to anticipate their clients’ needs and to provide the best service imaginable.’

Whether you’re in this class of customer or not, online shopping can let you down by having a ‘glaring lack of efficient, friendly service,’ which would frustrate anyone - not just the first and business class shoppers of the world.

The company is based in New York, but it has an Australian connection too - its founders are two former Australian corporate lawyers who saw a global demand for items that are only available in the U.S., so they decided to launch ‘a friendly, responsive and reliable personal shopping concierge that delivers desired items from the U.S. to consumers across the globe,’ with popular items naturally including tech gadgets and designer brands.

Big Apple Buddy was the result.

Noting that cross-border e-commerce has largely been focused on providing affordability, since the vast majority of global shoppers are Americans and Europeans looking for bargains in other countries, mostly notably China, the company notes that ‘there is also the under-served mass of global cross-border shoppers: busy working professionals worldwide that simply desire access to the latest items from America.’

So, Big Apple Buddy now becomes your New York-based global shopping concierge, and even though it is a newcomer in cross-border shopping, it has launched with top-notch client service in mind.

Clearly, such a policy works for Apple and plenty of established luxury brands, and given few companies cater to this market, it could clearly turn into an extremely lucrative business for those two former Aussie legal eagles.

The company says that it provides access to latest tech gadgets and fashion brands, first released in the U.S.

Contrary to the popular cross-border shopping route that goes from China to the U.S. and Europe, and focuses on affordability, Big Apple Buddy’s trading route goes from the U.S. to 190+ countries worldwide, and delivers accessibility.

An example is given of when a hot new tech item is released in America, there are many potential buyers around the world that do not mind paying extra for early delivery of the gadget rather than waiting for its release in their own country.

The Apple Watch is one such example, which was only released in 9 countries when it first hit the market on April 2015, leaving many desiring to try it in such wealthy markets as the UAE, Switzerland, Norway, Belgium, Israel, Denmark and many others.

There are other tech gadgets, too, such as the Huawei Watch, Amazon Echo, Hello Sense Sleep Tracker, Thync Mood Changing Wearable and others that are only available in the U.S. at the moment but are highly sought after by 30-40 year old professional men worldwide ­- the main target audience of Big Apple Buddy.

And, Big Apple Buddy knows it has competition - even from eBay - however common complaints often include non-existent after-sales service, a limit to the countries that sellers can ship to and the dreadful risk of counterfeit merchandise.

So, when a busy executive needs to receive that latest tech product, and are willing to pay whatever the premium might be, it’s no surprise to imagine that they would prefer the service to be authentic, smooth and efficient.

Big Apple Buddy naturally states it is here and ready to meet those needs.

It differs by providing ‘a completely personalised and seamless shopping experience by handling the entire process for the client,’ sourcing the item ‘for the best price, checking and repackaging the goods upon arrival at their facility, preparing all necessary customs documentation and having the parcel safely shipped to the client in as little as 2-4 business days.’

The company claims its success ‘is largely driven by the commitment of the founder, former lawyer from Australia, Phillis Chan, to deliver high quality service, honed in the course of her corporate law career in Melbourne with demanding clients and gruelling deadlines.’

Chan explained: “My background is service oriented, which means that a client always come first. I will negotiate the best price for the gadget that my client wants directly with the store, supervise every step of product delivery and answer emails around the clock.” explains the founder of Big Apple Buddy.

To illustrate how big the potential market is, the company says ‘cross-border shopping accounts for $300 billion in sales in 2015 and is expected to reach $1 trillion by 2020’, and ‘while the majority of global shoppers will still look for more affordable bargains online, the part of the market that expects high-level service and accessibility to newest items will continue to grow as well.’

So, if you feel the need, the need for quality customer service, we know who wants to be your Big Apple Buddy!

More in this category: « Vodafone offers two Galaxy-sized tablets with 4G VIDEO: DISRUPT.SYDNEY focuses on ‘disruption for good’ »
Share News tips for the iTWire Journalists? Your tip will be anonymous