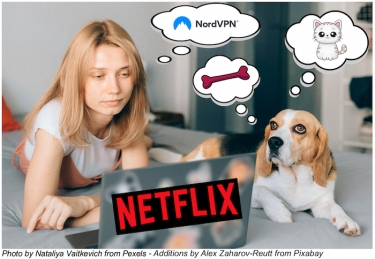 Cybersecurity researchers have discovered hundreds of thousands of leaked streaming service accounts, with damages estimated to have reached $38M. NordVPN has some advice on how to stop this from happening, and what to do to keep your accounts safe.

NordVPN, in cooperation with cybersecurity researchers, has found stolen data records from 16 million computers worldwide. The company notes the stolen data “ended up on the dark web after the computers got infected with Zeus, Pony Stealer, RedLine, Raccoon, and dozens of other types of malware built specifically for capturing login credentials saved on computers. As a result, 174,800 content streaming accounts ended up on the market for a resale.”

What has been stolen?

Daniel Markuson, a digital privacy expert at NordVPN said: “If you have ever saved your credentials in a browser, including your streaming service logins, your home address, or, even worse, your credit card data, malware like Zeus, Pony Stealer, RedLine, or Raccoon would take it all.

“More than that, bad actors also get information about your usernames, location, and hardware configurations and might take control over your device. Malware like that is not easy to get. It’s sold underground on a subscription basis.”

NordVPN’s data breach research partners evaluated a database that contained information leaked from 16 million computers in total, and estimate that the damage inflicted on users of streaming services alone could round up to $38M, with the damages calculated based on the most popular streaming service premium plan price for 12 months.

We’re told that Netflix users suffered the most: 61% of all stolen streaming credentials are associated with one of the most popular streaming platforms online. This was followed by Spotify (25%) and Amazon Prime (7%). Combined with Hulu, Vimeo, and Disney+, 174,800 thousand accounts have been stolen and are now being sold online.

Who was most affected?

According to NordVPN’s researchers, “half a million American internet users and more than a third of a million Canadians managed to download and install the malware that stole their credentials”.

Markuson added: “One day, these people will find themselves locked out of their accounts, unable to access it because the account got sold, its password changed, and the initial email associated with it replaced.”

However, users from the US and Canada are not the ones who were affected the most. NordVPN notes that “as many as 1.8M Indonesians got their data stolen and leaked, and the country alone represents 11.4% of all infected devices in the world. India, Brazil, and Argentina come next, with 1.2M computers affected each.”

Australia is not in the top 20 list, but that doesn’t mean Australians shouldn’t be complacent, nor anyone from any country. After ,all, Australia did hit the list in 35th spot out of 99 countries) with 89,740 computers affected - has your account been stolen?

Here is the list of the top 20 countries by the number of computer users affected by the data leak the cybersecurity researchers discovered:

What happens to stolen Netflix accounts?

We’re told that streaming service accounts are a very common exchange unit on the dark web.

Here, Markuson says he has “observed hackers simply sharing it for free, as it takes almost no effort to obtain them. On the other hand, eBay and other classifieds are full of offers to get access to a streaming service for half the price.

“One listing on eBay reads: “Netflix Account Premium 4K ultra HD 4 Screens 12 Months. Instant delivery within 1 min to 12 hours Worldwide. You can change your password, your email and your phone number. Works on your TV, computer, smartphone and tablet.” The price for the stolen annual subscription is US $19.99, when the official one costs $215.88.

“There is no doubt such accounts came from leaked computer data or acquired through other illegal activities. People who think it's a good idea to spend your money on that are contributing to theft,” continued Markuson.

So, how can you protect your data from being stolen and streaming service accounts from being taken over?

NordVPN tells us “Netflix and other streaming services accounts found by the cybersecurity researchers got leaked after users injected their computers with malware by clicking on a link or file distributed via email or private messaging apps.

“People think they are clicking on a link or opening an attachment from a trusted source provided in an email. Once they do, malware code gets executed on their device and secretly starts draining data from the victim's computer.

“Before opening any link or any attachment whatsoever, one must be 100% sure it’s legitimate,” warned Markuson.

According to the cybersecurity expert, “Another issue is that people barely use cybersecurity protections like VPN and antivirus. And, if they do, they fail to keep them up to date. The combination of the two could block the way to malware installation.

“What people must understand is that the stolen login credentials to streaming services are just a fraction of what has been leaked. Unencrypted files ended up on the dark web too. The best way to prevent this from happening to you is to start using protection tools like NordLocker that encrypt data and keep it safe in the cloud. Without a decryption key this information is useless,” Markuson concluded.

So, with major companies and online services seeming to be breached every week, if not every day, it really is important to use strong passwords and use affordable software to protect your digital life and your bank account. Be safe!

More in this category: « AMTA: How to use surf on mobile devices safely so every day is Safer Internet Day Amazon's Alexa give-away plus 15% off deal ends midnight today (Feb 12 2021) »
Share News tips for the iTWire Journalists? Your tip will be anonymous