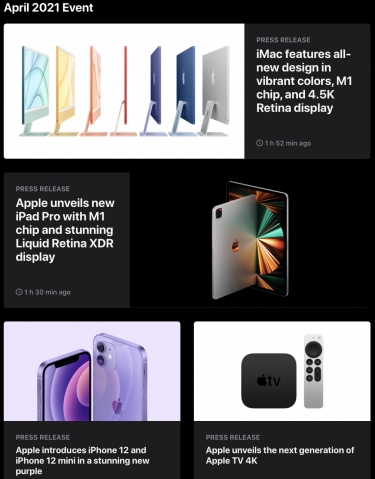 Apple's latest masterclass in technology, which includes the presentation of that technology as Apple does with its keynote events, is yet another lesson to its competitors on how to do things right.

These event also expose the many rumours that ended up right, and ended up wrong. Rumours that were right included a new iMac, a new M1-based iPad Pro, AirTags, and a new Apple TV.

Rumours that were wrong included a 27-inch iMac, a glossy Apple Pencil 3, new AirPods, a new HomePod with screen, and an Apple TV with built-in sound bar, and there were likely others.

I've said it before and I'll say it again - Apple puts more effort into its videos and events alone than most companies seem to put into their entire product ranges .

Before we go on with more detail, here is the Apple's Spring Loaded event in full, via Apple's official YouTube page, which is really worth watching - as it lets you see what the near future will look like!

The event started with Apple introducing the new Apple Card Family option, enabling people to share Apple Card and build credit together, but as Apple Card hasn't launched in Australia yet, it's a feature we're still waiting for.

Apple then introduced its newly redesigned podcast app, which was followed by the long-awaited introduction of AirTag at A$45 for a single unit and $149 for a four pack - with AirTag keychain-style holders sold separately.

After this came the 2021 version of the Apple TV 4K, now powered by the A12 processor, alongside a redesigned Siri remote that is a massive improvement on the Siri remote, even down to being able to run one's finger or thumb around the circle of the remote's touch pad to scrub forwards and backwards in video with precision. The 32GB model is A$249, and the 64GB is the one to get at $279, with AppleCare+ just $35.

We then saw the emergence of a new purple colour for iPhone 12, and impressive iPhone 12 mini, which Apple characterised as being a new Spring colour, although for us in Australia and the Southern Hemisphere, it's a new Autumn colour.

Saving its biggest guns until last, Apple then unveiled the stunning new M1-powered 24-inch iMac, with 4.5K Retina display, beautifully redesigned to be 11.5mm thin, with incredible speakers, incredible microphones, a brand new wide-angle 1080P front facing FaceTime camera with 'Centre Stage" option that will automatically keep you in the centre of the video call image, Thunderbolt and USB-C, super quiet fans and operation, and plenty more, in what is clearly going to be a massive hit.

The iMac with 8-core GPU starts at A$2199 with otherwise the same features. See here for all the details.

Apple then followed this up with the biggest reveal of the event - the M1-powered iPad Pro, with 5G, a Liquid Retina XDR display on the 12.9-inch model which gives a truly production quality display you can take anywhere - not just locked into a Mac Pro Liquid XDR display monitor.

Whether the M1 iPad Pro can be made to run Mac apps wasn't disclosed, with more information presumably to come at the upcoming WWDC Worldwide Developers Conference 2021.

The M1-powered iPad Pro but tons of power, and offers the touch screen and stylus capabilities the Mac does not, running Mac apps in an enhanced version of iPadOS 15 on a 12.9-inch 2021 iPad Pro (from A$1699) with trackpad-enabled Magic Keyboard and stylus, and the nearly two million apps that run on iPhone and iPad, and you would surely have Apple's purest expression of the future of personal computing.

Whether that happens is yet to be seen, but what would prevent an M1-powered iPad Pro from doing this? No doubt we'll learn a lot more at this year's WWDC.

The 11-inch model doesn't have the Liquid Retina XDR display but has everything else, and starts at $1199. Prices for both go up depending on the amount of storage, with full pricing options here.

Most of these products won't come until May, so there's a bit of a wait, but these devices are just the beginning of incredible upgrades we'll see over the next few years to 2030, and what comes beyond that, provided we haven't blown ourselves up as a species through war, economic collapse, worse pandemic, rogue AI, environmental catastrophe or zombies, we truly live in a golden age where the best is still yet to come.

Companies like Apple give me hope in humanity to muddle through and make it without causing civilisation collapse along the way from any number of dystopian scenarios.

So, iTWire will have more analysis throughout the day, but one thing's for certain - if you haven't watched the Apple Spring Loaded keynote yet, you should, even if it's just to see some of the Ted Lasso Season 2 trailer.

Apple's new technologies are awesome, with an M2 processor sometime next year inevitably set to deliver even more power and performance than ever before.

But until then, the M1-powered new iMacs and iPad Pros are here, along with several other goodies from Apple, so check out Apple.com, and take a look at the must-see keynote event, embedded again below as it is above.

Another happy Apple harvest that will propel Apple to even greater heights - and with WWDC not too far away, 2021 is Apple's most exciting year yet!