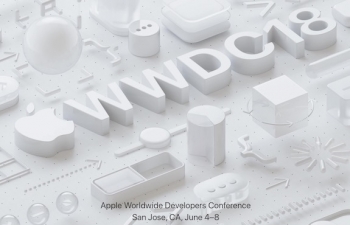 If you aren't watching Apple's twice-yearly keynotes for WWDC and the iPhones launches, you're missing out on a wealth of fantastic information on what the near future looks like.

There's a famous saying from William Gibson that I've been semi-misquoting by stating that "The future has already been invented, it just hasn't been widely distributed yet."

According to Wikipiedia, the actual statement is "The future is already here – it's just not very evenly distributed".

An excellent example of this is Apple's iPhone, which launched in 2007 and which was in development for a few years preceding its launch.

Fast forward to 2018, and there are more than one billion active iOS devices, showing that the future has well and truly been very widely distributed, and widely copied by Android devices reaching even more people.

Now comes Apple, the world's R&D department (or at least, for all those shameless copiers out there who often remain a year, two or more behind Apple in so many ways), with its latest WWDC for 2018, which has focused on the next versions of iOS, watchOS, macOS and tvOS for later in 2018.

For the rest of this week, you can watch all of the WWDC sessions live here and, after airing, on-demand, broadening WWDC's content to a global audience of masses of developers.

You can also watch the WWDC 2018 keynote at Apple here.

Apple proudly boasted of its now 10-year old App Store having distributed more than US$100 billion to developers, with millions of apps at the disposal of iOS users.

Apple even gave a sneak peek of iOS apps coming to Macs sometime in 2019, with the company launching its own News app, Stocks app, Voice recorder app and Homekit app on macOS in the upcoming macOS Mojave, which are ported versions of existing iOS apps with very minor changes to make them compatible with macOS, thanks to parts of the iOS user interface ported to work with keyboards, mice and touchpad.

To get the full effect on all that was launched, Apple's WWDC keynote is an absolute MUST SEE, even if you're not an Apple user, because Apple's keynotes put those of its competitors to shame.

There are no "fake demos" in Apple's keynotes, unlike the widely questioned Google Duplex demo during Google I/O 2018, which has had its authenticity questioned online.

Google has shown things that have never come to pass, for example, a feature that could remove a chain-link fence from a picture of a young boy batting in baseball. This feature was celebrated, but it has never arrived.

While Apple can take its time to launch features it has announced, such as iMessages in Cloud, that feature has finally arrived to wide acclaim, because it works.

No doubt there are features Apple has yet to deliver, but it delivers on its promises, and with more than a billion active users, and the world's generally highly biased reporters who are "against" Apple are always watching the company like a hawk, the company has every incentive to deliver, and it does so in spades.

The future of Apple's operating systems is very strong, and while Apple fans await a new Mac mini, an upgraded Mac Pro, new MacBooks with radically redesigned and much quieter keyboards that re-introduce better travel and much more robustness, along with the usual suite of new iPhones, iPads and various new Macs, Apple is all about getting the fundamentals right, and in place, before executing and following through with aplomb.

So, for more on all of Apple's announcements this week, check out its MUST READ press releases below, and get ready for a excellent update for all of its operating systems due in the US Fall this year, which is the Australian spring.

More in this category: « ASUS announces new Tuf Gaming brand and ROG Delta USB-C headphones VIDEO: See Waze on Ford cars with Sync 3 screens and control it by voice »
Share News tips for the iTWire Journalists? Your tip will be anonymous