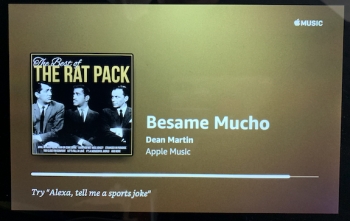 It was only last night that I was wondering WHEN Apple Music would arrive on Alexa in Australia, then lo and behold, it's available this morning!

Last night, I was looking online to see if there was any update yet on when Apple Music would arrive in Australia, and I came across a Reddit thread I'd seen before.

A couple of the posters had enthusiastically noted that they'd been able to get Apple Music working on their Amazon Alexa devices over the past few days, which gave me hope.

Yet, when I searched Alexa's skills for Apple Music, I only saw unofficial lists of top ten songs in various categories for Apple Music, and in the settings where I could add new music services, I could only see Deezer.

I imagined last night that Amazon had turned on Apple Music early for a short time to see if anyone noticed, and possibly to test the service down under with a few users, and that this meant Apple Music for Australian and NZ Alexa users was surely to come soon.

Well, blow me down, strewth cobber, this morning was the day to officially say G'day to Australian Alexa users at long last!

I opened up the app on Mum's phone, but there was still no Apple Music listing in the music services setting.

So I had a closer look at the press release, which I'm reprinting below, and I noticed a link that I could click, which is here.

This link allowed me to log into Amazon online and add the Apple Music skill that way, which I did, and which worked!

I was immediately then able to ask Alexa to play Mum's various playlists, or individual songs, and it worked beautifully. You can see the Besame Mucho playlist above, or at least the Dean Martin version of the song - Mum loves hearing all the many and varied versions of Besame Mucho, it's absolutely one of her favourite songs, and she loves the fact she can see the album art.

Now, it has to be made clear that Mum loves using HomePod, as it has been the only way (beyond her iPhone and iPad) to listen to the 50 million songs on Apple Music, and to easily get her favourite playlists to start playing.

HomePods also have superlative audio that is just excellent - and hopefully, a HomePod with a screen that can display album art, text answers to questions, text and video suggestions, video playback and more will come. I know an iPad is this device, but a stationary iPad, perhaps with a simpler CarPlay-style interface, merged with the HomePod's amazing speakers would be the best of both worlds - we'll just have to see if or when Apple decides to do that.

This is especially so now that Mum has been spoiled by the Google Home Hub's 7-inch screen, and even more so by the 10-inch screen on the Amazon Echo Show - she loves to see the album art that the free Spotify app provides (and the Apple Music skill now provides) - and the ability to use clearer on-screen controls than HomePod offers is also appealing.

The Alexa Echo Show also has a great sounding speaker and subwoofer, and while HomePod sounds that extra bit better, Apple Music sounds fantastic on the Echo Show, too!

Yes, Mum can get album art on her iPhone or iPad, but as I've been helping Mum to learn how to control a lot of her computing experience by voice, doing some of the things she does with tech is easier when there's a screen to go with it and a voice-first interface.

I'm still trying to get Mum to understand that she can type text messages by voice - she still wants to type things out which can take her some - but I'm getting there, and Mum is actually quite adept at talking to Siri on HomePod, Google Assistant on Google Home speakers and Home Hub, and Amazon Alexa speakers and Echo Show, and is still learning more all the time.

Now, since Amazon announced that Apple Music was coming to its Alexa devices, I was wondering when the service would be made available in Australia and for our cousins across the ditch, in New Zealand.

Well, that day has come, with Amazon noting its excitement over the feature launching in A/NZ, while also noting that "music has always been one of Alexa’s most popular features".

The company tells us that "Apple Music subscribers can now enjoy Apple Music’s 50 million songs on Amazon’s full range of Echo devices, including Echo Dot, Echo Plus and Echo Show.

"Customers will be able to ask Alexa to play their favourite songs, artists, and albums – or any of the playlists made by Apple Music’s editors from around the world, covering many activities and moods.

"Customers will also be able to ask Alexa to stream expert-made radio stations centred on popular genres like Hip-Hop, decades like the 80s, and even music from around the world, like K-Pop.

At Apple's site, it explains some of the ways you can use Apple Music on Alexa, and notes in the "Ask Alexa to play your music" section the following:

Really, all you need to do is just say Alexa first, as per normal, and then tell it to play what you want, and then finish it up with "on Apple Music", although it appears "on Apple Music" isn't always needed, but if said, should guarantee it works every time.

A site called "The Ambient" has a few more examples:

Alexa, "Play Today's Hits." - This worked without needing to say "on Apple Music" which I just tested. It should also be noted though that I made Apple Music the default music and radio service in the Alexa app.

Anyway, the following I haven't tested as yet but are further examples The Ambient gives - all of which must be preceded by the "Alexa" wake word first:

"Australia and New Zealand are among the first international launches for Apple Music on Echo devices, following the recent launch in the UK.

"Customers can enable the Apple Music skill and link their account to start listening—either via the Skills Store in the Alexa app, or [via this Apple Music Skill link at] Amazon.com.au."

So, there you have it! Apple Music is finally available on Amazon Alexa in Australia and New Zealand, which as Apple itself notes is also switched on in the US, UK and Ireland, too.

It also means that Alexa-enabled Sonos speakers will finally get voice controlled Apple Music, too, and if you have an Amazon Fire TV, Apple Music should work there too. 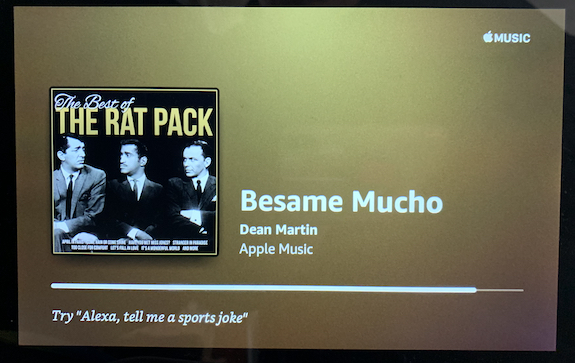 More in this category: « Speeding up osmosis: picturing DJI's Osmo and Mavic Air for tech-savvy Mums Make your Google Home and Google Home Mini portable with LOFT and JOT batteries »
Share News tips for the iTWire Journalists? Your tip will be anonymous