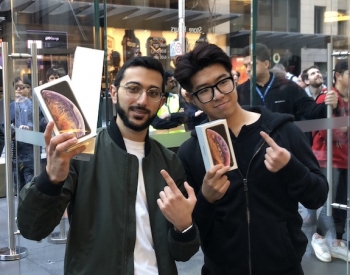 The Australian flagship Apple Store in Sydney's CBD is one of the very first places in the world to get the new iPhones, and as per usual, iTWire was there to capture it all on video.

From approximately 7.20am, I was at the flagship Apple Store on George St in the Sydney CBD, to check out the lines for the new Apple Store and to see what the buzz and excitement was like.

Now, right off the bat, I can say that the lines were not as long as in previous years. However, the line did grow, and in the first 45 or so minutes after launch, the line kept replenishing itself as people arrived to claim their iPhones.

As you'll see from the embedded video, most people actually did not want the 512GB versions, which is the version I would be going for, simply because if you're going to spend that much money, why not spend that little bit extra to get either four times or eight times the capacity?

Obviously there's a big jump between the 64GB version compared with the 512GB version, but that's clearly what price bands are for, and not everyone needs the maximum capacity when we live in a world of cloud.

Regarding the lines, Apple Stores aren't the only places to buy iPhones, and today, there are more telcos, online purchase options, mobile phone plans and countries that Apple delivers to simultaneously on day one than ever before, with a couple dozen more countries getting their iPhone XS and XS Max models in a week's time.

Who has the time to spend days in a queue when you can just order online and have your shiny new iPhone delivered to your home or work address?

Last year I was quick to order the iPhone X, and it arrived at my address on launch day. I didn't have it right at 8am, but I had it from day one, with no queuing up required.

It's also not as if iPhones are suddenly out of fashion or anything, I mean, Apple will sell more of them that ever, increasing its profits yet again, with so many people set to upgrade from older home-button based iPhones and older Apple Watches to the latest and greatest models that are genuinely so much better than past models!

Here's the first live stream video, streamed from an iPhone 8 Plus on the Vodafone 4G network, the second version can be seen below.

And for those who still want a real iPhone, Apple still sells its iPhone 8 and 7 models at more affordable prices, and they run all the latest apps, can do AR, and work with Apple Watches, HomePods and more.

So... Apple's queues in front of its flagship Sydney store weren't as frenetic as in years gone by, but there were still plenty of people there, the line kept replenishing in the morning period that I was there, the Apple staff were as cheering and cheerful as ever, and there were plenty of buyers ready and waiting for their new devices.

You can watch the live stream below – I recorded one video as a live stream direct to YouTube on an iPhone 8 Plus, and I had a second video recording on an iPhone X in case the bandwidth or stream dropped out for whatever reason, which I'm very happy to report didn't happen.

The two videos are effectively identical, but as I sometimes favoured the live stream video, you'll occasionally find it has a better angle on what I was looking at, or zoomed into, and I'd watch the live stream version, but that said, either video is worth watching.

The great end-of-year, gift giving Christmas sales season has now well and truly begun for Apple, the pain for its competitors is now intensified as Apple's products are ready and available, and the iOS 12 revolution has been live streamed and is available to just about every iOS user on the planet – rock on!

Here's the second video, filmed on an iPhone X, and uploaded after the event on the Telstra 4G network:

More in this category: « All-new Amazon Echo devices announced for 2018, 2018, 2018... VIDEO: VR tech 'throws user into a world of isolation to replicate life for a child with hearing loss' »
Share News tips for the iTWire Journalists? Your tip will be anonymous