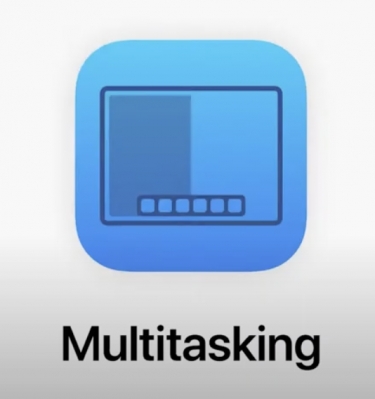 Multitasking on iPad, when it was finally introduced, was always a bit fiddly, and needing a bit of grokking to properly understand, but in iPadOS 15, multitasking looks simple, easy and intuitive.

Ok, so I haven't yet had the chance to download the developer beta of iPadOS 15, and the public beta won't arrive until July, but in the must-watch WWDC21 keynote, Apple demonstrated how iPadOS 15 multitasking works.

In the past, you need to swipe up from the bottom of the screen, and then you could either swipe up a multitasking-compatible app either as a split screen, called Split View, or as a floating screen, called Slide Over.

Once you learned it, it wasn't hard to use, but Apple looks to have refined this process with a new control that appears at the top of the app you're working on. Tap it and you'll see the multitasking menu, from which you can make an app full screen, create a split view, or put an app into slide over floating mode.

If you tap on the split view button, the app slides over and you can see your Home Screen, where you can tap on an app to see it take up the left half of the screen, with your initial app restore to the right hand side of the screen.

Now you have two apps side-by-side, and unless I'm mistaken, this appears to work with any app - I guess this will become clear as people start using it.

Want to change apps in your split screen? Just swipe down on the left hand side, for example, and the home screen returns (with the other app temporarily moved to the right hand side of the screen).

In the demo video, embedded below, the presenter taps the Mail app, and presto, you have two apps in side by side view again.

Here's the video that someone posted to YouTube, just of the multitasking section:

Tap and hold on an email, and you can have it floating in the middle of the screen above the other two. You can read the entire email without leaving the current view - as the video demonstrates.

You have the same multitasking options, letting you move the email itself into split view, or into slide over mode.

You can also swipe down on that email, and it is minimised into an area called the "Shelf".

You then have easy access to all open windows of an app.

In the video, the presenter goes to Safari, and we see a shelf of minimised windows pertinent to Safari.

You can have many Safari windows there, in split view with other apps, and you can easily add or remove windows by swiping them.

The traditional multitasking app view screen is also there, and the presenter says you can drag one window in that view over another to create a split view between two open apps that way, too.

It looks pretty cool if you ask me, and shows that the iPad is becoming ever more versatile, and ever more able to be a complete replacement for your Mac - if you want it to be.

That said, with macOS 12 Monterey's ability to let you use your Mac's keyboard and mouse or trackpad on an iPad, just by moving the mouse over to the iPad's screen - the Mac and iPad with macOS 12 and iPadOS 15 have never worked more smoothly together.

If the mythical MacPad is ever going to arrive, it's going to take some time. Rather than banging together the failed toaster fridge that was Windows 8, which Windows 10 didn't fix and which Microsoft will have another go at delivering with its next-gen Windows launch on June 24, 2021, Apple has elegantly made Macs and iPads work seamlessly together with macOS 12 and iPadOS 15 with a feature called "Universal Control."

Yes, this is only based on the videos I've seen of it working together, but again, it is based on more than a decade of iOS, iPadOS and two decades of the modern macOS.

I'm sure that whatever Microsoft demo's is going to look good, but in around four months, tens and hundreds of millions of Mac and iPad owners are going to be using the new hyper-cross-platform capabilities on an everyday basis, in the controlled environment that is the known quantities of compatible Macs and iPads.

I have a lot more faith that Apple is going to get this right than Microsoft, which hasn't yet shipped its supposed iPad and Mac combo-killer called Surface Neo.

We might see something arrive on June 24, but even if Microsoft ships it, it will be version 1.0 of a new device, while Apple's iPad and macOS have never been more sophisticated or mature, nor laden with native apps from across the spectrum, while Microsoft tries to get "developers, developers, developers" interested in a device that no-one owns yet.

The world's mass of developers are developing for Apple platforms and devices, and with iPadOS 15 finally allowing the creation of iPhone and iPad apps on the iPad itself, Apple is, after all the years, still years ahead of the competition.

I applaud and encourage Microsoft, Google, Samsung, Huawei and others for competing as hard as they can - Apple and the consumers and businesses of the world need competition - but the old adage that "once you go Mac, you never go back" has never been more apt.

Of course, these days, you can go Mac, and iPad, too, and doing so is a decision very few ever rue.

So, bring on the public betas, and the launch in the US Fall (and Australian spring)!

I'll definitely be giving the developer versions of iPadOS, iOS, macOS and watchOS a spin in the next few days in the meantime to see just what the future looks like, one in which the vast majority of Apple device owners will soon be living in before the year is out.

In the meantime, Mr Anderson Nadella will presumably try to convince Surface Neo that he is the one, but the machines he'll be fighting are Microsoft's own as the great architect Gates keeps trying to reboot the system.

Perhaps one day Microsoft will find that everything that has a beginning has an end, while on the Apple side of the fence, the last forty years of its existence see it finally reach the end of the beginning, with the really extraordinary part of Apple's dent-making trajectory in the universe revving into top gear and going into overdrive.

It's an incredible time to be alive, and while it will look incredibly primitive in the decades to come, this may well be the time that the B&W TV era of technology finally started broadcasting in stunning hyper-def colour.

You can watch the entire WWDC21 keynote here:

More in this category: « Apple's WWDC 2021: stop everything and watch the future of computing on iPhone, iPad, Mac, Watch, TV and more! Telstra 5G connectivity making cycling safer »
Share News tips for the iTWire Journalists? Your tip will be anonymous