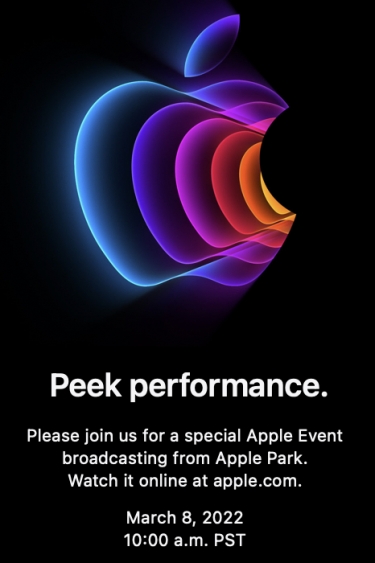 Apple's next event was long rumoured for 8 March 2022, and so it has come to pass, with Apple making the date public, and an iPhone SE with 5G expected, as well as a new 5G-enabled iPad Air, new Macs, and hopefully, a "one more thing" surprise.

Reports thus far, all of which are unofficial until Apple has its media launch, say the iPhone SE 2022 will retail the same shape and stylings, but will include 5G, and what is presumed to be an A15 processor.

There's also talk that Apple will continue selling the existing 4G iPhone SE 2020, but will lower the price, making it the most affordable iPhone that is still on sale from Apple, while still able to run iOS apps, and which will still get updates for what is presumed to be at least the next three or more years.

When Apple launched the iPad Air with its iPad Pro stylings, but a Touch ID sensor in the power button, some wondered why it didn't come with 5G, but with Apple carefully planning its range, and the hardware used within, and the price points it wants to reach, 5G just wasn't on the radar for that iPad Air.

However, the iPad Air 2022 due to launch next week is expected to have 5G, and presumably an A15 processor, although who knows - perhaps Apple will launch it with an M1 processor, especially given that Apple is expected to launch an M2 processor later this year.

Whether any iPad Pro models will also launch is yet to be seen, but there are expectations Apple will launch new Macs.

Will there be a Mac Pro model that has one of the M1 Pro or M1 Max processors? An updated Mac mini? Will there be an M2-powered MacBook Air? Or are these to come later this year?

And will there be a "one more thing" surprise?

If there is, it will presumably be more than the launch of iOS 15.4, iPadOS 15.4 or macOS Monterey 12.3, which is expected to launch soon, too, with next week's launch an ideal time to do so. Not only will iOS 15.4 allow you to unlock your Face ID-equipped iPhone while wearing a mask, but it will also officially deliver the long-promised Universal Control between Macs and iPads that lets you control an iPad from your Mac's keyboard and trackpad/mouse, or control multiple Macs and an iPad with the one set of keyboard and pointing device.

Whatever happens, Apple always puts on a good show, and will likely also talk of its environmental advances, and its privacy initiatives, but whether Tim Cook will make any comment on the Russia and Ukraine situation is unknown.

So, I'll be up at 5am AEDT on March 9 to see Apple's latest and greatest unveiled live, but unless you're an early bird, Apple's YouTube page will have the replays and Apple's website will carry the stream live and offer replays, too.

Here's the live stream YouTube embed, which obviously won't go live until the dates above, and below is a tweet from Apple's Greg Joswiak.

More in this category: « Sonos Roam SL - the new, portable dedicated wireless speaker from Sonos is coming soon to Australia Vale Shane Warne - the Australian cricket great who bowled over the world »
Share News tips for the iTWire Journalists? Your tip will be anonymous