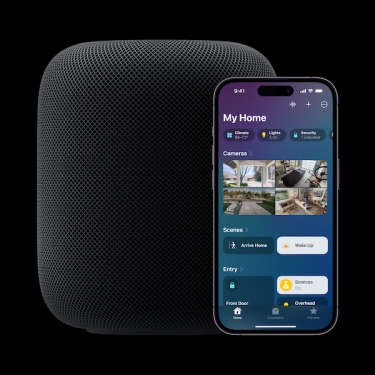 A new Homepod, the 2nd generation, is out, and available from Friday 3 February. The original HomePod was released five years ago and the new generation comes with a raft of innovations made over that period.

The 2nd generation Apple HomePod brings a new level of acoustic capability with advanced computational audio, support for spatial audio, and enhanced Siri features. It even includes temperature and humidity checks and can work with smoke or carbon monoxide alarm sensors.

The new Homepod comes with an acoustically transparent mesh fabric and a backlit touch surface that illuminates from edge to edge. It has a custom-engineered high-excursion woofer, a built-in bass-EQ microphone, and a beamforming array of five tweeters around the base to achieve a powerful acoustic experience. It is driven by the Apple S7 chip.

With room-sensing technology, the HomePod recognises sound reflections from nearby surfaces and thus can determine if it is against a wall or freestanding and adapt the sound in real time.

When combined with other HomePods, it can provide a superb stereo experience. It can also play over 100 million songs from Apple Music, and act as a home theatre with your Apple TV 4K.

If you have other Apple products you can hand off whatever you're playing on your iPhone, whether a song, podcast or even a phone call, directly to the HomePod. It allows you to control what's playing on your Apple TV by voice, find your iPhones, and even listen for smoke and carbon monoxide alarms. Additionally, with new built-in temperature and humidity sensing, you can create automation to open or close blinds, turn on or off fans, and so on, if you have other smart devices in your home. In fact, the HomePod now has Matter support so your HomePod will connect to and control Matter-enabled accessories, and act as a hub giving you control when away from home.

Here's a summary of what's changed between the original HomePod and the 2nd generation HomePod:

More in this category: « Apple’s M2 goes Pro to the Max, with new Mac mini and MacBook Pros atop its crown of computing supremacy Master your craft with Cricut - effortlessly cut your ideas into reality »
Share News tips for the iTWire Journalists? Your tip will be anonymous