Apple’s M2 goes Pro to the Max, with new Mac mini and MacBook Pros atop its crown of computing supremacy Featured 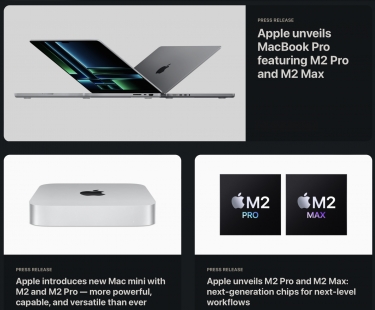 Forgot quantum supremacy or the singularity, and even forget about ChatGPT and AI for the moment - the computing platform you work on, and the hardware, software and services upon which it runs are crucially important for computing happiness, with Apple pulling out all the stops to deliver the world’s best computing and technology platform bar none.

Long awaited and finally here are the new M2 Pro and Max variants of the M2 processor already widely available in the 2022 MacBook Air and 13-inch MacBook Pro, with a new Mac mini also getting not only the M2 processor, but available with the M2 Pro, in what would make the M2 Pro Mac mini into something closer to a Mac Studio mini, with incredible bang for your buck.

You can watch the 18 minute and 54 second “mini keynote” presentation (with US prices) embedded immediately below, after which is pricing and other information on the models launch, so please watch, and read on!

Despite the economic headwinds of inflation, the base level M2 Mac mini is $100 cheaper than the 2020 model, and while the other Macs have gone up a little in price, using Apple technologies is absolutely worth it and does make a huge amount of difference.

The cheapest $999 M2 Mac mini has 8GB RAM and a 256GB SSD, and for everyday computing needs including office applications, email, browsing, social media, web apps, and more, this configuration works especially well for Apple devices with their deep integration between operating system, software, hardware, memory, neural engine, graphics cores and processing cores, all on its original M1 SoC or “system on a chip”, and now its more powerful M2-line upgrades.

The M2 Pro equipped model is more powerful still, with extra hardware on the Mac’s M2 Pro processor to turbo boost video editing to ever faster levels while just adding a lot more oomph and power to Apple’s “desktop PC” equivalent that isn’t one of its all-in-one iMacs.

It’s portable too, with portable monitors looking like giant iPads widely available, as are keyboards, mice and trackpads letting you use your Mac mini anywhere, with the new M2 Pro and Max-powered MacBook Pros in 14 and 16-inch sizes for those who need the purest, no-fuss portable computing solution.

Those who wish to push their Mac minis and themselves to higher levels should at least consider upgrading to 16GB RAM and a 512GB SSD, taking the $999 to $1599, which doesn’t include a mouse or trackpad and keyboard, as well as a monitor, but you will be getting a more powerful Mac for your money, and can experiment more freely with virtualisation software, doing more complex video editing and using your Mac more heavily that more casual users.

In the video above, which as always is so professionally and smoothly produced, we see some great advances from Apple in power and performance, and with the MacBook Pros, even better battery life while delivering all the power they can, whether on battery, or connected to a charger.

And now that the world is in both recessionary and inflationary times, Both the recent IDC and Canalys reported big falls in PC purchases from all the big Windows PC brands fell by about 29% in Q4 2022 compared with the same period in 2021, with PC sales across 2022 falling 16% compared to 2021 levels.

Both organisations had graphs showing Apple increasing market share and unit shipments quite nicely, while everyone else went backwards, and while the total number of PCs exceeds Mac sales by 90%, the old adage of quality of over quantity applies more than ever, especially applying in an Apples to Windows comparison across just about every metric.

So now we come to Apple’s next-gen M2 Pro and Max processors built on next-gen 5nm technology, with the move to 3nm presumably to come with a future M3-based Apple Silicon processor over presumably the next 18 months.

Delivering 20% more performance than M1 Pro and Max equivalents, and beating their older comparable Intel-powered Mac equivalents by orders of magnitude, Apple’s new M2 Pro and Max are the most exciting processors out there, to be beaten only by the as-yet unannounced M2 Extreme, and of course by the M3 and future equivalents to come in the years ago.

This is despite the daring work AMD has done to really push the x86/x64 CISC processor environment far faster than Intel was dawdling with, especially as Ryzen launched back in March 2017, which has seen the sleeping Intel giant slowly awaken from all the technological whacks AMD was delivering, while effectively losing Apple almost completely as a customer.

That’s because Apple came through with its long-predicted and long-stated desire to own as much of the technology as possible that powers its decides and technologies, and Apple brought Apple Silicon to life with the M1 processor and its eventual family of even more powerful models.

Apple add that M2 Pro scales up the architecture of M2 to deliver an up to 12-core CPU and up to 19-core GPU, together with up to 32GB of fast unified memory.

M2 Max builds on the capabilities of M2 Pro, including an up to 38-core GPU, double the unified memory bandwidth, and up to 96GB of unified memory.

Apple reminds us its industry-leading performance per watt makes it the world’s most powerful and power-efficient chip for a pro laptop, with both chips also featuring enhanced custom technologies, including a faster 16-core Neural Engine and Apple’s powerful media engine.

You can read Apple’s press release on the M2 Pro and Max processors here, which include all the details of how the M2 models have dramatically improved.

All of the new Macs are available to order now, with shipping in Australia starting on 3 February, 2023, in what will set off a new round of upgrades from older Macs, and.a new wave of switchers from Windows PCs sick and tired of all the BS that comes with the Windows OS and various Windows-powered hardware vendors.

So, while Macs cost more than PCs, Apple delivers truly impressive performance at every price point, and your life is a lot simpler and smoother on a Mac, dramatically lowering the total cost of ownership.

Check the launch video for yourself above, and check out all of the information at Apple.com.au, but if you are looking for a new computer, you definitely need to put a Mac on the shortlist, because chances are that once you’ve seen it and used it, you’ll buy it!

For most people, once you go Mac, you don’t go back, and with an up-to-the-minute M2 Mac mini starting at $999, and refurbed and 2nd-hand Macs widely available, there’s never been a better time to explore the multiverse of Mac, iPhone, iPad, Apple Watch, Apple TV, and other Apple options for yourself, and to find out what you’re missing!

More in this category: « TCL, Belkin, and Laser have back-to-school covered with these devices Apple announces new HomePod with breakthrough sound and intelligence »
Share News tips for the iTWire Journalists? Your tip will be anonymous