Amazon Alexa's three years in Australia: how are we using it? 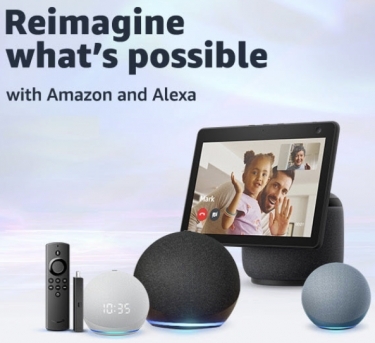 You can talk to your smartphones, tablets, computers, TVs, smart speakers, smart displays, home systems and more, and one of the world's favourite ways to speak to your devices is Amazon's Alexa, with Amazon sharing how we're using Alexa devices.

Siri, Alexa, Google Assistant, Cortana are the big four virtual assistants and spoken interfaces to our devices, data and content, bringing forth the world seen in Star Trek where people spoke to the computer, and it responded intelligently and carried out your commands, requests for information and more.

Even Samsung has its Bixby virtual assistant, and Huawei has Celia, with even more assistants out there for individuals and businesses besides.

Today, even though many people now take this kind of interaction with their homes and devices for granted, there are still plenty of people who don't yet interact this way with their devices, homes and computers this way at all, or if they do, in simpler ways, even as the technology only continues getting better with every update and every generation.

Alexa's official YouTube channel has a lot of great videos on how you can use Alexa's features and enjoy its benefits, with Amazon's Alexa January 1 2021 top tips video the one I've embedded below, after which the article continues.

Aside from the motorised display, the same can be said for Google Nest and compatible devices from various big brands, along with Apple which recently added a smaller and cheaper but still top quality HomePod mini speaker, and with the fact every iPhone, iPad, iPod touch, Mac, Apple TV, Apple Watch and connected Air Pods are a conduit to Siri too, on any Apple device you own including your iPhone, along with over two billion Android smartphones, there is strong competition out there for user attention.

It's incredible to think we have all of this information, on tap, and we can just ask our devices pretty much anything, and they'll have an answer!

Whether people have used or even know about all of the new features and benefits of the updates and updated devices these services have received, or not, all of this development, competition and modernisation has brought forth brand new devices all three brands and the ecosystem late last year, which also includes the brand new Amazon Alexa devices launched, including the new Echo Show 10.

Amazon describes it as being "a complete reimagination of Alexa with a screen, has been upgraded in every way. It features a brilliant 10-inch, adaptive HD display that automatically stays in view when you interact with Alexa—no matter where you are in the room. Plus, the new brushless motor is completely silent, meaning you won’t hear a thing as Echo Show 10 rotates."

It also makes me wonder how long it will be before Amazon Alexa robots can roam around your home and help you in a similar way to what Samsung demonstrated with its robots at CES 2021, which you can read about and see a really cool video of here.

So, with future Alexa-powered robots still to come, with motorised screens the closest we'll get in 2021, this leads us to Alexa now having been officially being available in Australia for the last three years, which as Amazon says it's "over 1,000 days of making the lives of Aussies easier by letting them voice-control their world."

We're told that "since Alexa first launched in 2018, Australia has seen a huge rise in the number of households integrating smart home technology into their daily lives, with 1 in 6 houses now having a smart speaker."

"In 2020," Amazon said it "saw a significant rise in the sale of smart home products, with its Echo Dot smart speaker topping the list of must-have devices.

"But while Aussies are keeping up with their reputation as early tech adopters, data from Amazon has also revealed that many of us are not always using Alexa to its full potential, with less than half of users (43%) making the most of Alexa’s smart home capabilities by pairing it with other compatible devices."

So, what does Amazon's research show on how we are we using Alexa?

We're told that "Aussies are certainly making the most of Alexa to manage their day-to-day lives with over a third of users (36%) utilising smart speakers in their daily lives, and 48% using smart speakers to listen to the news and weather reports.

"As a country of music lovers, streaming music remained a top use case for Alexa in 2020, with Tones and I’s Dance Monkey topping the chart for the most requested song by an Aussie artist last year. If you weren’t playing Dance Monkey, then you were probably listening to the radio, with requests for radio stations also spiking last year as Aussies spent more time at home and less time in the car.

"It turns out we’re also experts when it comes to embracing Alexa’s funny side. Known for our self-deprecating humour, it comes as no surprise that we’re asking Alexa for insults four times more than we’re asking for compliments. Not only that, novelty skills like Pickachu Talk, Ask for a Fart and Bark Like a Dog, grew 271% YOY in March-June 2020."

What is Amazon's view on "The smart home of the future?"

Looking ahead, Amazon says its research "has revealed that 76% of Aussies agree Alexa will be a key feature in the home within the next five years, suggesting that smart homes will become the norm in the future.

"With thousands of skills to choose from, Alexa makes it possible for any home to become a smart home with just the power of your voice.

"From controlling your compatible lights and home devices through the Echo smart speaker, to pairing with the Ring doorbell, or simply turning on your favourite Netflix series with your compatible Fire TV device – Alexa has it covered.

And with many users engaging with Alexa more than ever last year, Amazon says it's "predicting that Aussies will become more adventurous in the ways they use it."

“It’s been humbling to see so many Aussies welcoming Alexa into their homes over the past three years. We’ve worked hard to delight our customers by adding over 25,000 skills to Alexa, from useful skills such as Cocktail King and RadioApp to crowd pleasers such as Spotify, Audible, Apple Music, Podcasts, and Netflix. We pride ourselves on building a seamless experience that Aussies love and will continue to deliver on this for our customers.

“Looking ahead to 2021 and beyond, we’re expecting to see more customers talking with friends and family in Australia and internationally, via Alexa Calling and Alexa Drop In features in response to the human need to connect. Never has this been more important, especially while many of us are unable to visit friends and family as often as we would like."

So, what does Amazon see for Alexa, looking ahead, and what are the predicted top trends for 2021?

With sales of smart home products skyrocketing in 2020, 2021 is set to see even more Aussies embracing home-automation, fuelled by convenience of voice communication and a continued desire for more personalised experiences. This year, Alexa will be working with compatible smart home devices to wake us up with a fresh cup of coffee and set our air-conditioning to the perfect temperature as we travel home.

As we’re slowly able to celebrate with friends at home again, Aussies will be upping their home entertainment game. From pairing your Echo device with a compatible Fire TV device to automate their home entertainment systems, to finding the perfect party games, or creating the ideal mood lighting with compatible lights - Alexa users will have plenty of ways to set the scene for their guests in 2021.

3. Creating connections with loved ones near and far:

With international and domestic travel off the cards for the foreseeable future, Aussies will be making the most of Alexa Communications to connect with friends at home and away who have the Alexa app or a supported Echo device. A quarter of Aussie customers already use Alexa to “drop-in” on friends and family, and with Alexa allowing you to share personalised messages with friend’s devices and video call family around the world, it’s the perfect way to stay in touch.

Amazon has more information on all of the Alexa smart home devices and connected appliances and systems that are Alexa compatible here. 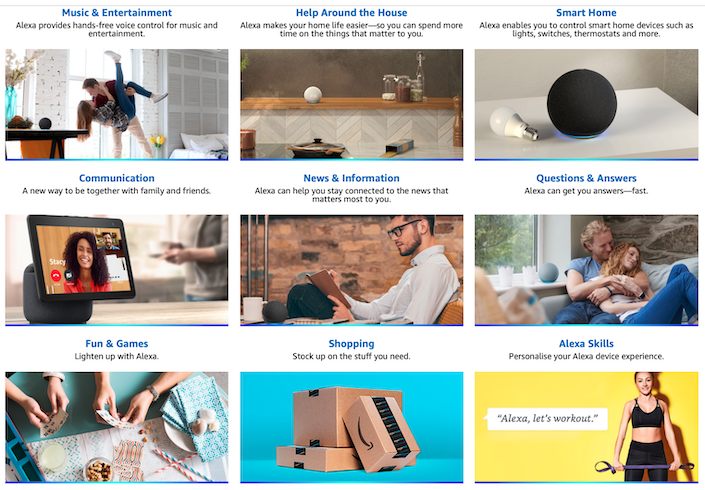