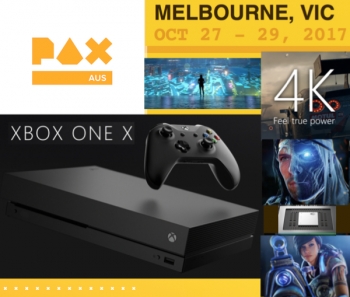 PAX 2017 is Melbourne's "pop culture" and gaming expo, with Microsoft to showcase its most powerful Xbox yet, the One X with a suite of great games, most with 4K, HDR and 60fps visuals.

If you're in Melbourne between 27 and 29 October, and you love modern gaming, you may wish to visit PAX Australia 2017.

PAX is now a global series of gaming conferences, founded in 2004 in the US, with millions over the years enjoying PAX's expo floor halls "filled with booths from major game publishers and independent developers, panels from video game industry insiders, game culture-inspired concerts, LAN parties, tabletop gaming, competitions and much more".

Given the event's strong global following, it's clearly an ideal venue for Microsoft to showcase its Xbox One X games console, its newest and most powerful model yet, with the event letting the public see and play with the console over a week before its official release.

Naturally, after so many years of various Xboxes being on sale, you can find virtually any kind of gaming title you want to play, whether you’re into high-octane racing, battle royale first-person shooters, or family gaming.

Microsoft is billing its roster of titles on show as being from the most diverse line up of games in Xbox history, ensuring "there really is something for everyone at the Xbox booth this year".

We're told that "fan favourites including Forza Motorsport 7, PlayerUnknown’s Battlegrounds and Super Lucky’s Tale will be available to play on the booth, in addition to new releases from local developers including Brisbane-based Defiant Development’s Hand of Fate 2, and Auckland’s Grinding Gear Games’ Path of Exile".

Meanwhile, if you like a bit of actual reality mixed in with all those virtual gamin worlds, you can get set aboard the Belfast-built, three-masted Polly Woodside tall ship just outside of the convention centre, where "would-be pirates can take to the high seas with the highly-anticipated Sea of Thieves" – which we're told is "the first time the game has been on show here in Australia".

What’s more, many of the titles on show will showcase the 4K, high-dynamic range (HDR) and 60 frames per second capabilities of the new Xbox One X, which is a must-have feature for 2017 audio visual technologies, and another great way to use a 4K television besides 4K streaming and 4K Blu-ray movies. 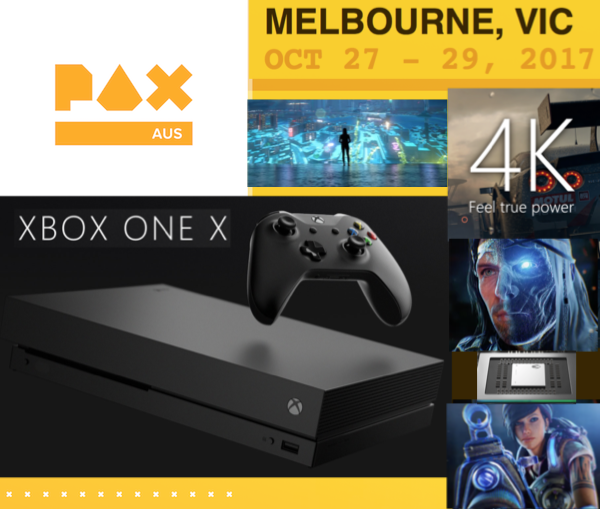 This year, attendees "can also join members of the Xbox international team in the convention centre’s Wombat Theatre on 28 October to discuss key industry topics".

"At 11am, Shannon Loftis (General Manager of Xbox Publishing) will be live on stage with local industry experts to discuss Women in Games in Australia, whilst Chris Charla (global head of ID@Xbox) will sit alongside Australian developers to discuss how indie games are taking the world by story in The Power of the Modern Indie at 3pm."

Some of the great Xbox games on show this year include:

Xbox Australia also promise to be "broadcasting all weekend from the Mixer chill zone, located at the Xbox booth".

More information and a chance to pick up last minute tickets at the PAX Australia website, here.