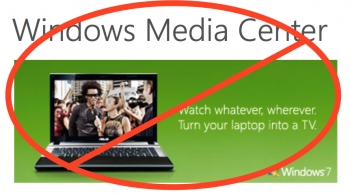 Goodbye Windows Media Centre, or Center as Americans spell it, you won’t be in Windows 10 but it sounds like video recording is coming to the Xbox One.

Microsoft’s Windows Media Centre (WMC) began life in Windows XP, and it looked like the perfect way to get free-to-air TV programs onto your PC.

Part of the problem is that PCs were flaky - who’d want their favourite recordings interrupted by a virus, or a defrag, or a pop-up - and in Australia, you weren’t able to connect it to Foxtel as was possible in with US cable channels using a ‘CableCard’.

Indeed, some set top boxes or STBs came with USB ports for TV recording, and some TVs come with TV recording capabilities direct to USB.

The beginning of the end for WMC started with Windows 8, with Microsoft making it an optional paid extra, rather than including it in as standard as was the case with Windows Vista and Windows 7.

Now, Windows 10 will lack the feature completely, and if you upgrade a Windows 7 or 8 computer you use with WMC features, it will be removed.

This will force those who still rely on WMC to not upgrade those computers to Microsoft’s latest and greatest.

There are other WMC-style programs out there which come with USB-connected digital TV tuners, but these programs are third party add-ons, not programs directly built into Windows.

Microsoft Gabriel Aul confirmed this with a tweet stating: “We can confirm that due to decreased usage, Windows Media Centre will not be part of Windows 10.”

A second tweet said: “If you have WMC now, we’ll have a DVD option for you in an update later this year”.

This suggested that Microsoft though most WMC users simply used it as a DVD player, but plenty of tweeters lamented the loss, noting they DID use WMC as a PVR.

Noted Windows blogger Paul Thurrott said: “Microsoft’s solution for this need will apparently be the Xbox One, though the console currently only provides live TV watching, but not recording. My sources tell me that will change, and most probably this year, to include TV recording.”

So, goodbye WMC, may you still be recording heaven’s free-to-air in the sky.

More in this category: « ISPs to pay 75% of Dallas Buyers Club legal costs VIDEO: Presto’s Aquarius is Duchovny’s search for Charles Manson »
Share News tips for the iTWire Journalists? Your tip will be anonymous