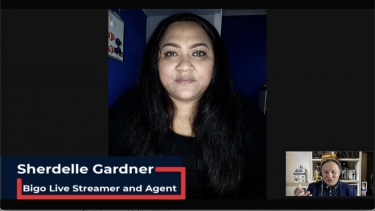 GUEST INTERVIEW: The livestreaming trend is taking off and the market is projected to be worth $184.3B by 2027, according to Restream, and Bigo Live aims to be an even bigger part of the trend than it is now.

Bigo Live. It's the social networking platform you might not have heard of, but it proudly boasts of double digit growth in the A/NZ market, and global growth shows live-streaming is now at the heart of culture.

Bigo Live is celebrating its fifth anniversary this year, and the livestreaming platform reports having helped empower more than 1.3 million Australians and New Zealanders to make better connections with their communities.

Indeed, the community-first social networking platform says it "has helped broader communities foster a deep understanding of cultural trends and aims to elevate the unique voices of Australians including the LGBTQIA+, Indigenous and multicultural communities."

Back in January, Bigo Live celebrated its second annual Awards Gala event, which celebrated the resilience and creativity of live streaming broadcasters, with six Australian and New Zealand finalists representing the region at the ceremony.

As live streaming becomes a leading form of infotainment, the top broadcasters on Bigo Live are becoming celebrities in their own right, with their fans celebrating their success all over the world.

`One such top broadcaster is Sherdelle Gardner, also known as Princess Dory, a former nurse who now makes her income from the Bigo Live platform. And she joined me to talk about everything about Bigo Live in celebration of the organisation's fifth anniversary, with the video interview in full below, after which is a summary of the topics we spoke about - please read on!


I started by introducing Sherdelle, and asked her to tell us about Bigo Live and when it started, as well as her experiences on the platform, what she talks about when streaming live, and more.

Sherdelle explained what makes Bigo Live different from other social media platforms, and why streaming video on a live basis on the platform is at the forefront of social media.

We then spoke about how live-streaming can help empower individuals to make better connections, grow their audience, and even earn an income, as well as how emerging artists can share their talent, build their audience and community.

Sherdelle then shared her experiences of what she first saw streaming online, which may or may not surprise you, as well as her memory of her first computer.

We discussed what the future of streaming might look like in 2030, and how the best is yet to come in the years to come, along with great advice that Sherdelle has received in life to help her get where she is today, along with her final message to iTWire viewers and readers, and to current and future Bigo Live streamers, viewers and users.

So, why join Bigo Live?

The company says you can interact directly with your favourite broadcaster and like-minded fans, chat with your communities through its Clubhouse-like feature in multi-people rooms and multi-guest talk shows, form "families" of up to 500 fans to build your community as a rising star, and showcase your talent to the global stage as an emerging artist with Livehouse events.

You can check out Bigo Live here for yourself, as well as downloading the iOS and Android versions of the apps to see how it all works for yourself.