Sony PSVR2 available for 15% off at The Good Guys 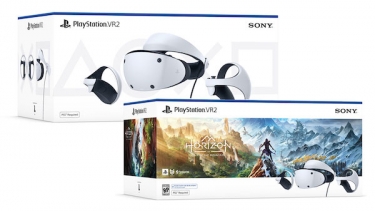 One of this year's most hotly-awaited pieces of tech - the Sony PlayStation VR2 - is coming out in February, and The Good Guys have released a stunning 15% discount.

Virtual reality, or VR, has been with us for years, even decades, though truly became available to regular gamers and users only in the last decade with the launch of headsets such as the Oculus Rift (now part of Meta), and the HTC Vive.

Oculus / Meta and Vive have since released newer models and have gained traction in gaming and business.

Yet, it was Sony who made VR mainstream with the PlayStation 4's first-generation PSVR headset. It sold millions of headsets, well dwarfing the combined sales of all PC-based VR headsets. And now the beefy hardware of the current generation Sony PlayStation 5 is about to be paired with a whole new VR experience again.

The Sony PSVR2 headset is hitting the streets on 22 February 2023, some seven years since its predecessor was launched. With this comes all-new tech - higher resolution 4K lenses, eye tracking, finger tracking, more rapid responsiveness, no need to be tethered to a camera's view, and more.

Of course, an upgraded experience doesn't come cheap, seeing a sticker price of $879 for the stand-alone PSVR2 and $968 for the PSVR2 Call of the Mountain bundle that comes with a launch title.

Well ... if that sounds like the PSVR2 is more than the price of the PS5 itself (which it is), The Good Guys have your back with 15% off that iTWire has not seen anywhere else. That takes the prices down to $747 and $824 respectively.

You can find their pages here and here, and the 15% comes with code BD10 entered at checkout.

What's more, The Good Guys say if you use their app to pre-order, vs. the website, and pay using PayPal pay-in-four they will give you extra credit too for your next purchase.

You can find the PSVR2 launch titles here.