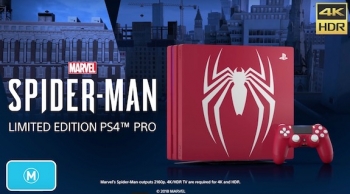 Sony tells us that "players can run along walls and swing through the air in the upcoming Marvel’s Spider-Man on the 'limited edition Pro' bundle".

As for the 'limited edition PS4' bundle includes "a 1TB PS4 ‘Amazing Red’ console in the special Spider-Man design, a matching DualShock 4 wireless controller, Marvel’s Spider-Man game on Blu-ray disc and a PlayStation Store download voucher for The City That Never Sleeps DLC".

The new trailer for Marvel’s Spider-man Limited Edition PS4 bundles is here and embedded below, with the PlayStation Blog offering more information.

However, we're also told that "HD TV owners will benefit from the game’s built-in supersampling with increased image clarity and detail."

Sony tells us we can "feel the power of Spider-man’s improvisational combat, fluid urban traversal, dynamic acrobatics, and environmental interactions with the special edition console when the game launches on 7 September, exclusive to PlayStation 4."

More in this category: « What is the emoji for the word 'emoji'? Does even Apple know? :-) VIDEO: Moleskine brings Nintendo's Mario imagery to life on paper »
Share News tips for the iTWire Journalists? Your tip will be anonymous