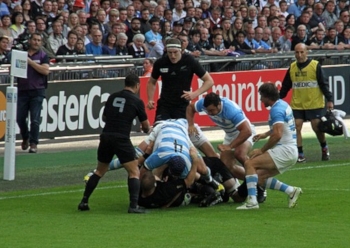 Image by Monica Volpin from Pixabay

Business intelligence and data visualisation firm Qlik has developed a Web application for rugby fans to follow the progress of the teams they support at the ongoing Rugby World Cup and also look back at historical data when needed.

A statement from the company said the app would update in real-time and provide key metrics from a game as it progressed. There is no app for either mobile platform.

James Fisher, senior vice-president of Qlik, told iTWire in response to queries that the difference between the top teams from Australia, England, New Zealand, South Africa and Ireland was marginal.

"With such a hairline of difference separating [these] top squads, greater scrutiny is no doubt being placed on differentiators that will help one of these teams lift the trophy," he said.

"At this stage, a lot is made of tracking past performance and current squad specifics to predict a champion – but less is said about the actual value of data to coaches in creating and training a Cup-winning side. Because at the heart of it, data is key to creating the most efficient team possible."

Fisher said the use of cutting edge analytics technology to monitor real-time metrics and stats from the tournament was not limited to supporters, as they could do using the Qlik Rugby World Cup app.

"Technology has now advanced to allow coaches to track a player’s every move on the pitch. The England squad, for example, uses aerial drone footage from every session to scrutinise players’ work-rate and movement off the ball to make sure opportunities aren’t being missed," he said.

"Rugby coaches and their strength and conditioning trainers are also making use of GPS tracking software to collect data on anything from speed and running efficiency to heart rate and body impact loads. All of this data is then analysed and used to improve and advise the players."

He said the collected data could also be used to "bring radiant health benefits with these systems sending data to the doctors so that they could ensure the players remain healthy and safe throughout the game. We have even seen the use of specialised mouthguards which relay this data to the benches".

Asked for some examples of data being used to benefit a team, Fisher pointed to an example in baseball. "Most elite team and individual sports now use data analysis to help improve team and player performances and gain a competitive edge," he said. "...we’ve also seen data used in everything from golf, to cycling, to swimming, to baseball and more.

"One of the most famous baseball examples is also one of the earliest and it was so successful it led to the creation of the blockbuster, Moneyball. The Oakland A’s team used data analytics to build a winning team, employing an approach known as ‘sabermetrics’ wherein they recognised which pieces of data were the most valuable in providing insight into a player’s true ability.

"They used this to pick out players that other teams were overlooking and built an extremely successful team. This approach has since become widespread throughout the sport."

Fisher said cycling was another sport that now relied heavily on data.

"In the Tour de France, teams study a range of information — from the performance of the riders, to the technology included in the bikes and even the course layout — to pinpoint exactly where they need to be focusing their energy in each stage to see the greatest success.

"There are a lot of variables in the sport, which makes this analysis extremely interesting. You’re measuring physiology, movement patterns, biometrics, environment, and so on, through a host of sensors and devices. Key to success is how you bring all of that information together."

The data used by the Qlik Rugby World Cup app was all from the public domain. "But on a different note, with so much data at the disposal of coaches, it should come as no surprise that concerns over the use of players’ data have been raised against clubs and unions from the players themselves," Fisher said.

"It’s been argued that because data is so valuable to the players and teams, players have the right to own their own data to ensure it is not exploited by their own team or sold to third parties - something which could be detrimental to the players in the fullness of time."

He said an illustration of the increasingly inherent value of this data — also known as Infonomics — could be seen in how careful sides were in protecting their data.

"Squads are now acutely aware of the risks of this data falling into the wrong hands and how that could give rival teams the edge and be seriously damaging during events such as the Rugby World Cup.

"Despite some apprehension surrounding the use of data, it is only going to become more central to the nature of the game as the capability of this technology increases. This equipment has the power to harness the ability to send real-time data from the players to those working on the touchlines and that has clear benefits to performance analysis and health monitoring during and after the game.

"While the data used in our app is all publicly available, it’s certain that the private data analytics used by each of these clubs and their players will assist the coaches in bringing their teams to victory."

More in this category: « Foxtel to bring ABC iview to on-demand services Logitech launches gaming keyboard with swappable switches »
Share News tips for the iTWire Journalists? Your tip will be anonymous