Massive Monster's Cult of the Lamb

The Big Games Night In is part of ACMI's contribution to Melbourne International Games Week, and gives the public an opportunity to play a selection of new Australian videogames at no charge.

This curated selection of free-to-access games includes Cult of the Lamb, A Halloween Valentine, and e-Scape and Drive Me to the Moon.

They will be available to play from home throughout the whole of Melbourne International Games Week, starting Sunday 2 October.

Most are Windows only, but some can be played on consoles.

The Big Games Night In will feature numerous 2022 Australian Game Developer Awards (AGDAs) finalists, and ACMI is hosting the inaugural ACMI Audience Award. The public is invited to visit ACMI to try out a selection of outstanding games and vote for their favourite, with the winner to be announced on Sunday 9 October 2022.

ACMI provided the following descriptions of some of the games featuring in this year's Big Games Night In:

Cult of the Lamb by Melbourne developers Massive Monster is an adorably dark adventure/management game that sees you play god-worshipper and recruit other animals to join your cult.

A Halloween Valentine (pictured below) is the much anticipated follow-up to last year's award-winning Video World by Things for Humans. A spooky and romantic puzzle game with a synth-pop soundtrack composed by Jacob Leaney, get a first look at A Halloween Valentine at BGNI. 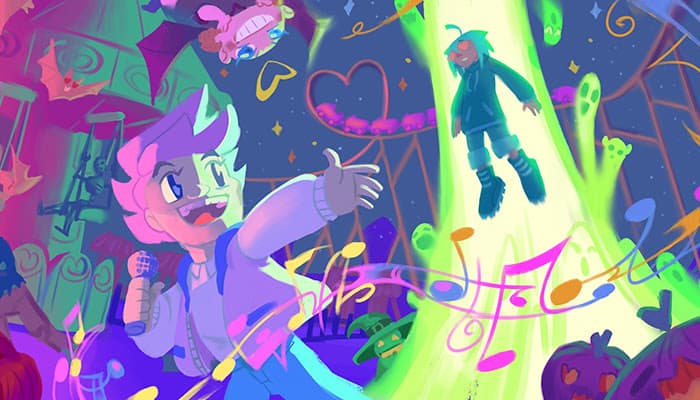 e-scape by Olivia Haines is a zen nature experience game that sees you explore an abandoned virtual world – a love letter to the bygone online worlds of the 2000s, and Drive Me to the Moon is a tiny open-world driving game with a romantic twist.

Susurrus is a narrative adventure game created by winner of the ACMI + RMIT Games Prize, Caleb Noeller, in collaboration with Sarah Carlton. Explore a foreign country as Bo, who teams up with his friend Asha to help find Bo's archaeologist uncle who has mysteriously gone missing.

Mars First Logistics by Ian MacLarty is an open-world physics simulator set on the surface of Mars. Your task is to build robots, gather materials and help deliver unwieldy resources to other space colonies, and explore the hostile environment by any means necessary.

Call of the Golden Valley is a first-person modern murder mystery by O'Saurus Studios, set in the High Country of Victoria. After a magpie postpones your trip to America, a friend asks you to go look for her missing brother in a regional town. Travel to Phillipston, interview locals and uncover clues.

ACMI videogames curator and public programmer Arieh Offman said "ACMI is so proud to be presenting the Big Games Night In for the third consecutive year as part of Melbourne International Games Week.

"This event enables ACMI and its audiences to show its support for the local videogames industry and the variety of world-class games being created right here in Victoria and beyond.

"The Big Games Night In is a great opportunity for families and friends to get together and share memorable times playing the latest videogames."

Things for Humans game developer Jacob Leaney said "I'm excited to be part of ACMI's Big Games Night In this year because it's a way for me to connect with audiences who may not always consider themselves gamers! It's a practical and fun way to reach these audiences and celebrate local games with the community!"

More in this category: « FULL VIDEO: Catchlight 2022 Film Festival awards ceremony and interviews HyperX celebrates 20 years of gaming with special deals »
Share News tips for the iTWire Journalists? Your tip will be anonymous