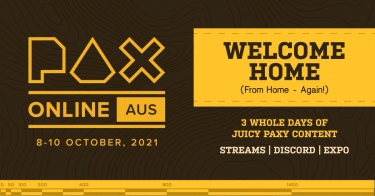 For the second year running, PAX Aus has had to be cancelled, but like a great game player with several lives up their sleeve, PAX is dusting itself off and restoring to an online spawn point.

Building on the success of what we're told is "last year’s record-breaking event," PAX Aus Online will bring a distinctly Aussie flavour to your computer screens this October 8-10 as part of Melbourne International Games Week.

PAX didn't say it, but Delta is like an end-level boss that we haven't figured out how to beat yet, and all the vaccine health packs are clearly taking their time to power us all up, even though that's happening.

Anyone who purchased tickets to PAX Aus 2021 are obviously entitled to a full refund and should have already received information about that.

The organisers say PAX Aus 2021 will be "completely free to attend and will be held… honestly everywhere. From Twitch to Discord to our own website, PAX Aus Online is a many-headed beast."

If you want to be prepared to enjoy everything PAX Aus Online then get moving on:

The organisers say: "Uniting one of the strongest communities in gaming, PAX Aus Online will encapsulate everything you love about PAX, with international content alongside Straya’s best, including thought-provoking panels, exciting livestreams, new game demos, tournaments and a community experience unlike any other.

"Keep your eye on the PAX socials for more info coming soon. It’s time to hffh. That means have fun from home. Maybe it’ll catch on.

So, while the physical PAX event has succumbed to the nefariously dangerous COVID pox, there'll still be stacks of PAX for the games-loving people of Australia (and the world!) to enjoy on October, 8-10, 2021.

We are all definitely bummed that we can't do PAX Aus in person for a second year, but we are really excited about #PAXAus Online 2021! We had a blast with you last time and we can’t wait to do it again in October. Welcome home… (from home, again!) pic.twitter.com/hwCNG3GoIP

More in this category: « Why 80% of Aussies say they pirate less in 2021 Sony announces HT-A5000 soundbar for 2022 »
Share News tips for the iTWire Journalists? Your tip will be anonymous