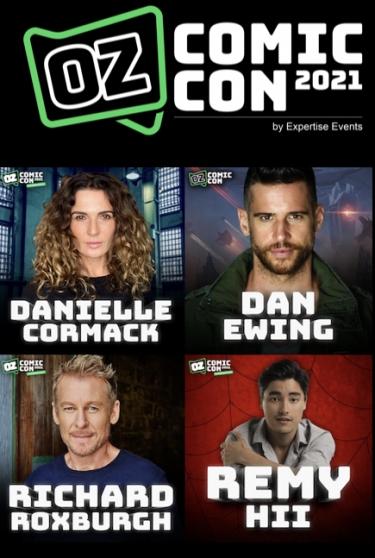 On 4 and 5 December in Sydney and 11 and 12 December in Melbourne, Oz Comic-Com is making a triumphant return, showcasing the latest and greatest that pop culture has to offer, giving attendees the chance to regroup with their super squad in the wake of lockdowns and have tons of fun!

Oz Comic-Con. The event is back on live, and naturally, it welcomes fans of all ages, interests and pop-obsessions with a truly immersive experience across two fun-filled days.

The organisers say: "Whether you’re a Muggle, a Marshmallow, an Earper, a Jedi, a Whovian or someone who doesn’t understand a word we just said, as long as you love popular culture and enjoy a fun day out, we have something for you!

"Oz Comic-Con truly connects fans with their pop-passions and fosters bonds and lifetime friendships across pop culture fandoms in Australia. Discover the fun, friendly atmosphere that welcomes everyone to Oz Comic-Con, and join us as we celebrate what you love!".

The first event for 2021 is in Sydney on 4 and 5 December, with the second event this year in Melbourne on 11 and 12 December at Jeff's Shed (the Melbourne Expo and Convention Centre).

2022 will see the event in Adelaide on Feb 19 and 20, and then on March 26 and 27 in Brisbane, with Oz Comic-Com's newsletter signup here so you can be kept up-to-date with the details.

The Sydney event is first, and Melbourne second, and both boast a stellar lineup, with the Homegrown event featuring "a range of celebrities from film and television (both in-person and virtual), authors, illustrators, cosplayers, content creators and immersive activations from film studios and partners.

"With something for every pop culture fan, Oz Comic-Con is the perfect opportunity for fandoms to reunite or the perfect early Christmas present for your friend or family member who always wins the entertainment section of the pub quiz."

One of the guest stars is recent SAS Australia contestant and reject Dan Ewing, who probably isn't spewing that his last name isn't Xwing, but possibly laments the missed opportunity that the surname Xwing might have afforded, not that it prevented Dan's starring role in a 2020 sci-fi movie called "Operation: Rainfall," which more people probably would have known about were it not for the pandemic, screwing things up right royally, almost comic-book style, across most of 2020 and 2021.

So, Dan is one of the TV and Film guests, with others including Richard Roxburgh (Van Helsing, Moulin Rouge!, Rake), Remy Hii (Spider-Man: Far From Home, Crazy Rich Asians, Marco Polo) and Danielle Cormack (Wentworth, Rake), with the guests to be engaging in a range of autograph and photograph sessions throughout the weekend.

So, what are the main event features to anticipate and enjoy?

As you weave your way through the showfloor of Oz Comic-Con Homegrown, we’re told you should keep your eyes peeled for activations from film and television (including a 2.5m Recycled Metal Transformer), exclusive merchandise, and interactive opportunities that are only possible in a convention setting.

Below are a few highlights, or a bucket list if you wish, for Oz Comic-Con Homegrown Sydney, with the text from the Oz Comic-Con media release:

● Main Stage
The Main Stage is where you go to catch the Q&A panels with the event’s Film & Television and Comic & Author guests both in person and virtually.

● Community & Workshop Stage
You’ll be hard-pressed to find a more passionate, engaged and thoughtful group than the fans that converge on Oz Comic-Con for each event. That showcase starts at the Community & Workshop Stage. We’re told these Panels are a great way to tell or teach like minded people about a topic you are passionate about. Panels can be Q&A style, a moderated affair, interactive or a story journey. Within this space we can cater to many different topics including cosplay, drawing, crafts, photography, editing and more.

● Anime & Trivia Stage
The Anime & Trivia Stage, where your inner (or outer) Otaku and your Pop Culture Trivia knowledge come together in a giant (metaphorical) melting pot of fandoms. The centre of the show floor for Anime content, this stage will host Anime screenings, panels, cosplay and trivia, along with broader themed Pop Culture Trivia events.

● Artist Alley
A space to celebrate art in pop culture, Artist Alley is a colourful, creative district filled with original and fan art. Take the opportunity to interact with the creative geniuses behind your favourite comic books, graphic novels, literature, and artistic projects - a truly unique and authentic way to get to know local talent as they make waves in the global scene.

It’s in Artist Alley that you can purchase a unique commission, designed and drawn just for you or shop for prints and artistic creations such as novels, jewellery, clothing, and homewares. No matter what you like, you’ll find a creator suited to your interests, whether it be superheroes, manga, sci-fi, fantasy, horror or indie.

● Cosplay Central
Cosplay Central is the meeting place and undeniably the unmissable destination for all cosplayers and cosplay fans at Oz Comic-Con. Meet local cosplay talent for tips and tricks, grab your mates for the perfect photo op in front of cosplay sets and get your photo snapped by local cosplay photographers.

● Cosplay Parades, Cosplay Active and Cosplay Kids
Oz Comic-Con hosts a variety of parades at the event for different skill levels.The Cosplay Parade is a great event showcasing the talent of cosplayers at Oz Comic-Con! It gives everyone the chance to get up on stage and strut their stuff.

For those not quite ready for the Championship of Cosplay but a step above the Cosplay Parade, Cosplay Active is open to mainstream competitors to show off their crafting talents and bring the PLAY component to cosplay.

The kids cosplay parade is a great way for our littlest cosplayers to get into the cosplay spirit! Kids can go on stage either on their own, in a group or for those who are either too little or too shy, with a guardian.

● The District
The District is the activity melding pot. It’s a great place to check out if you want to browse the Manga library, have a draw on the scribble wall, learn some origami or take part in the drawing competitions. The District will play host to the cosplay group meet ups throughout the weekend with its photo wall. Stop by and have a play on one of the free-play gaming consoles, or bring your handheld console and chill out for a little while and enjoy some Among Us, Animal Crossing or Pokemon Sword and Shield with other con goers. There’s a little bit of something for everyone in The District.

● Gaming Zone and Esports Tournaments
Australian Esports League (AEL) joins forces with Oz Comic-Con bringing their free play gaming zone and esports tournaments to each show. AEL recognises the importance of building ‘grassroots’ esports, delivering a gaming experience like no other to the broader gaming community.

The gaming zone will showcase the latest games and products, with an opportunity for attendees to battle it out against their mates and other attendees.

If tabletop gaming is more your speed...

Ticket to Ride, Pandemic, Catan. Heard of those? Maybe you like Zombie Dice, Small World or Red Dragon Inn? Well this year Oz Comic-Con is giving you access to all of these games, and more! The event will be using its tabletop resources to bring you a two-day gaming extravaganza. Get along to the gaming zone featuring a library of over 40 different games you can play.

More in this category: « LAUNCH VIDEO: Nanoleaf launches the ultra-modern lined LED Light Bars The End of Fortnite is coming on 5 December »
Share News tips for the iTWire Journalists? Your tip will be anonymous