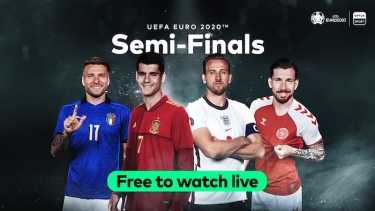 Optus Sport has announced it will make its live coverage of the UEFA Euro 2020 semi-finals and final matches free to watch for all Australians.

The two semi-finals (5am on Wednesday 7 July and Thursday 8 July) and final (5am on Monday 12 July) will see England, Italy, Denmark and Spain fighting it out for glory, off the back of what has been an incredible UEFA Euro 2020 tournament to date.

Optus Sport head of TV and content Corin Dimopoulos said, “We have had our greatest ever month on Optus Sport with the best of the best competing in the UEFA Euro 2020 and Copa America 2021 tournaments and we still have the biggest matches of the tournament to go.

“With the likes of Harry Kane and Lorenzo Insigne to be in action across the Euro finals, all Australians can now watch these three live matches on Optus Sport for free without a subscription.

"We recognise that a lot of the country is currently restricted when it comes to going round to friends' houses or to a venue to watch games together, and we are therefore pleased to provide as many Australians as we can with the opportunity to enjoy the last three tournament games in the comfort of every home."

Optus Sport expert John Aloisi, a Socceroos legend who has played professionally in England, Spain and Italy, said that the tournament has so far more than lived up to the hype.

“UEFA Euro 2020 might have been postponed by twelve months due to the pandemic, but it has certainly been worth waiting for,” Aloisi said.

“The Round of 16 was about as captivating as an international tournament has been in my lifetime, with plenty of shock results, late equalisers and winners, and even the customary penalty shootout we’ve come to expect.

“The quarter-finals picked up right where the Round of 16 left off, and these are some of the most eagerly anticipated semi-finals we’ve ever seen, so it’s great to know that all Australians will have access to watch them both, as well as the final, live and free, exclusive to Optus Sport.”

The UEFA Euro 2020 schedule (AEST) on Optus Sport is as follows:

Access to watch both semi-finals and the final live on Optus Sport is available across mobile and tablet devices, web browsers, Fetch, Apple TV, Chromecast and select Smart TVs and media streaming devices. An Optus Sport account is not required to watch these select live matches.