NFT token market continues booming, 'Ksoids' are the next fun thing to collect! 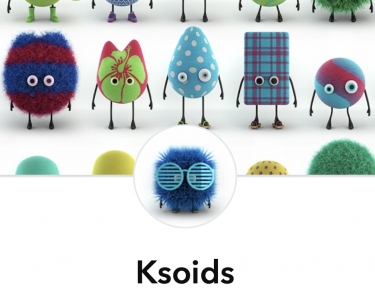 NFT stands for Non-Fungible Token, and while some might think they're a craze where art prices go sky-high during boom times, plenty of people are taking them seriously, with New York-based Danil Krivoruchko offering 1000 unique 3D characters for sale, with hundreds already sold hours after launching.

NFTs. Wikipedia explains they are "a unit of data stored on a digital ledger, called a blockchain, that certifies a digital asset to be unique and therefore not interchangeable. NFTs can be used to represent items such as photos, videos, audio, and other types of digital files.

We've already seen one NFT called "Beeple" which sold at auction for US $69 million, although Krivoruchko's Ksoids are vastly more affordable.

Operating from his Myshli Studio in Brooklyn, New York, Ksoids are available to buy from the Opensea platform and are available individually, or in sets of 4 and 10 characters at a starting price of 0.04 ETH each (the equivalent of US $86).

Ksoids are billed as "unique, and uniquely curious creatures" created by Danil Krivoruchko and they're now available to collectors and investors for a limited time.

Given the phenomenal success of CryptoPunks (a collection of nine CryptoPunks to be sold at Christie's next month has an auction estimate of $7-9 million), it's obvious that NFT collectibles are quickly shaping the next chapter in the history of digital art, although for how long, no-one knows.

Until then, they are the hot new thing that is generating a huge amount of interest and attention, and people obviously love them!

Ksoids are billed as "the first generative art, 3D characters that not only create a world of their own, but also help protect our own" - which is because "20% of each sale will be donated to the Orangutan Outreach, a non-profit organisation dedicated to protecting orangutans in their native habitat."

In addition to benefiting Orangutan Outreach, we're told that Krivoruchko "is also committed to counteracting the substantial carbon footprint that results from the creation and trading of NFTs."

Indeed, we're told a portion of the proceeds from all Ksoids transactions will go to climate change organisation 350.org. and that "the establishment shares Myshli's commitment to transparency with ETH cryptocurrency being accepted as donations, where every contribution can be tracked in the blockchain."

If you think Ksoids are new, they were actually created by Krivoruchko and his wife Viktoriya in 2013, with Ksoids quickly taking on a life of their own.

Much to Krivoruchko's surprise, the creatures became a digital phenomenon, with fans around the world. Now, 1000 of Krivoruchko's favourite Ksoids have been transformed into unique, highly collectible NFTs.

So, if adding a digital artwork to your collection is up your alley, then visit the Open Seas - or rather, the OpenSea platform, and check Ksoids out for yourself!

More in this category: « NIVEA Men E-League season 4 FIFA21 soccer kicks off Friday, April 23, 2021 Telstra advises new stock of the Xbox Series X has arrived in Australia »
Share News tips for the iTWire Journalists? Your tip will be anonymous