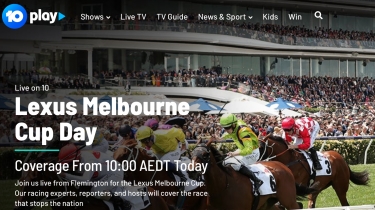 With Channel 10 having taken over the Melbourne Cup broadcast from Channel 7 last year, it's watching the Cup action and all the races around it can happen right now from any TV tuned to the SD or HD channels of Channel 10 and, in the regions, the WIN network.

The famous Melbourne Cup race itself is on at 3PM AEDT for those in New South Wales, Victoria and Tasmania, which means 2.00pm in Queensland, 2.30pm in South Australia, 1.30pm in the Northern Territory and 12.00pm in West Australia in their local timezones, although that's the way it has been for decades so there's no surprise there.

If you're a member of the Kayo sports streaming service, you'll be able to watch the famous race via this link while a report I read online said channel 529 is where you can watch on Foxtel. The same report suggested you can watch on channel 529 on Foxtel Go, but on my Foxtel Go app there is no channel 529 - just channels 526, 527 and 528 as horseracing channels.

Racing.com is another place to watch The Melbourne Cup race and to obvious watch races without all the Cup Day fluff - if you want that then watch the free Channel 10 stream at 10 Play.

The TAB site says it is "the only betting app with live Flemington action" but has the asterisk that this "available to TAB account holders only".

The Sportsbet site has a "live racing" link that takes you to Sky 1 and Sky 2 with the warning popping up that live streams can be delayed by 30 seconds.

You can check with other betting sites and apps but your best bet is to get the 10 Play app or just go to somewhere like Racing.com

There are also options to listen to the Melbourne Cup race being called, with Sky Sports Radio, RSN Racing, TAB Radio, ABC Grandstand and others, including what will presumably be some commercial radio stations, but given it is so easy to watch and will barely use up any of your mobile data, then it's naturally recommended to watch rather than just listen.

So, there have never been more options and ways to watch The Melbourne Cup race and even day long event online from anywhere you are, but if you're near any kind of TV, well, that will be the biggest and best screen to watch from.

The JustHorseRacing site has a free 2020 Melbourne Cup Sweep you can download and print out, if you still need on!

Please remember to gamble responsibly, drink responsibly, think of those who need your support and bet with your head, not over it. Don't drink and drive, don't run with scissors, don't swim after eating - and always remember, when you order a hot coffee, the contents are hot!

More in this category: « Australians escape the reality of pandemic restrictions with video gaming IMAX Melbourne: Reopening Nov 19 as one of 13 theatres globally to screen TENET on IMAX 1570 Film »
Share News tips for the iTWire Journalists? Your tip will be anonymous