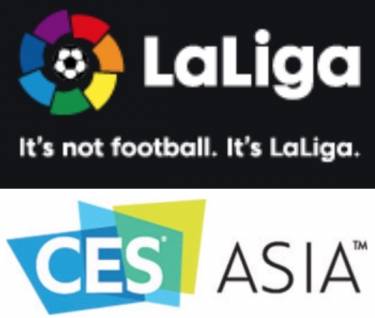 Imagine if your favourite sports event was presented in a totally 21st century, immersive broadcasting experience for viewers, with real-time data analysis and even more detailed information for coaches and players?

Well, that is the reality for viewers of the LaLiga soccer/football league, available on BeInSports on Foxtel's Sports Pack in Australia, with LaLiga showcasing just how it is able to provide such immersive and high-quality broadcasts, and it did so at CES Asia 2018 with its partners Mediapro, Regional Official Partner of LaLiga in China Konka, Intel and Samsung Gear VR.

Now, as the LaLiga people tell us, when the 2017/18 LaLiga Santander season ended, FC Barcelona were crowned champions for the 25th time.

LaLiga is followed around the globe, and we're very reliably informed is "one of the world’s best-televised and most-watched sporting spectacles".

Showing great forward thinking, the league says it is "dedicated to enhancing the TV viewing experience for its global fanbase and ensuring the competition's clubs have the most advanced tactical and strategic information".

Although I'm a fan of soccer in general, I'm not what you call an absolute diehard fan, although I, of course, will be watching FIFA 2018 which will be starting very soon.

So, I wasn't seeking LaLiga out, but found one of its representatives by chance, who told me about the technology being used, which definitely piqued my interest to want to learn more.

I was taken to LaLiga's exclusive showcase to Asia this week, coinciding with CES Asia in Shanghai.

As you'll see below, in full, LaLiga presented a "behind-the-scenes look at the state-of-the-art technology and data-collection systems used to create the best game on the pitch and the best broadcast on screens everywhere. The showcase was created by LaLiga in collaboration with production partner Mediapro, a leading group in the European audio-visual sector, and with support of Konka, regional official partner of LaLiga in China, Intel and Samsung Gear VR".

At the event, staged for the first time in Asia, journalists from around the region were shown cutting-edge technologies that power LaLiga’s unrivalled broadcast, including Skycam bird's-eye views, Intel True View 360° replay & “Be The Player” viewing angle and live 3D graphics.

LaLiga also offered a glimpse at what could be a future fan experience with VR technology, developed by Mediapro. Additionally, LaLiga demonstrated what could be seen as the best kept secret behind the performance of LaLiga clubs on the pitch: Mediacoach, a high-tech data analysis and visualisation tool.

Here is the full video presentation – the article continues below, please read on!

Joris Evers, LaLiga's chief communications officer, highlighted at the event: "We’re committed to offering an experience that puts LaLiga viewers as close to the action as possible, so they can feel the passion and truly have a great fan lifestyle, even if they’re several time zones away from the stadiums. Creating a premium viewing experience is key as we know that most fans follow LaLiga from afar.”

"4K HDR (High Dynamic Range) broadcasts bring fans closer to the action with more realistic images, giving fans the sense they’re even closer to the live-action than the crowd in the stadium. LaLiga is one of the few competitions in the world available in HDR, with more consumers able to enjoy this great experience everyday as sales of HDR televisions grow and the OTT services and satellite technology expand.

"A minimum of 20 HDR cameras are used to create the LaLiga HDR experience. HDR delivers colour and brightness in a superior level, mastered in up to 12-bit colour depth and 10,000 nits peak brightness. The image has a more stable, rich, deep, solid appearance that looks almost three-dimensional. Offered in two headline games of every matchday last season, LaLiga plans to increase the number of matches broadcast in 4K HDR in the upcoming 2018/2019 season."

"Located 21 meters above the pitch and providing unique overhead footage, Skycam is an aerial camera with advanced capabilities. Angling from a bird’s-eye view of the action and the stadium, fans from all around the world can see the action in the stadium from an impressive aerial view. The lofty vantage point offers an exceptional viewpoint from the pitch’s view with the camera’s 360-degree rotation and fast speed.

"With a 4/3, 14x wide-angle lens, compact, and high-definition models, covering an area of almost 7,000 m2, these cameras are top of the line in the market. Directly transmitting footage from the pitch to a mobile unit via fibre-optic cables, fans won’t miss a second of the match from beginning to end. While Skycam isn’t new technology, LaLiga leads the world in Skycam usage, having installed the Skycam permanently in 8 stadiums and expanding the installation to another three stadiums for the upcoming season."

"LaLiga is the only football league in the world to have deployed Intel True View, a high-tech system that delivers an immersive 360-degree video experience enabling every piece of play to be reproduced in 3D. Intel True View allows a TV director to place a virtual camera anywhere on the pitch, offering LaLiga viewers a unique and spectacular perspective of the action from every angle.

"Intel True View utilizes 38 cameras permanently installed in a stadium. The video from these cameras is processed through a series of powerful servers, generating a volumetric image that allows for replays to be viewed from any position or angle. In the 2017/2018 season LaLiga added the “Be The Player” perspective, providing viewers the amazing ability to see a key moment in a match through the eyes of a player.

"Another powerful new feature is the laser wall, a virtual wall that is overlaid on the pitch, giving viewers a clearer picture when determining offside positions.

"LaLiga is also the only football league to offer viewers Live 3D graphics during its broadcasts. These serve to complement the match data made available to the spectator and represent a unique and novel visual support.

“Providing a visual spectacle is critically important to LaLiga,” said Evers. “Today’s fans are used to seeing incredible action, be it watching films or series TV or while playing video games. Altogether, the broadcast technologies we use make LaLiga matches on TV resemble the amazing virtual action people are now used to seeing in video games.”

"While LaLiga has invested heavily in broadcast quality, the league also is working to develop other fan experiences. The research and development team of Mediapro and LaLiga have been experimenting with virtual reality (VR) technology. Last December’s El Clasico encounter between Real Madrid and FC Barcelona was filmed with a set of two 360º cameras and four 180º cameras to create a proof of concept VR experience.

"Attendees at the LaLiga Innovation Showcase event in Shanghai were given a preview of this viewing experience using Samsung Gear VR devices, which offered users a preview of the first features of the virtual reality app that is under development:"

"Perhaps the best kept secret to LaLiga’s success over the past decade is an innovative data analytics and visualization tool called Mediacoach.

"Mediacoach is the fresh approach of match-analysis with cutting-edge services developed by Mediapro. With this new training tool, every club’s coaching staff has the data to carry out in-depth analysis of various features of each game. Since the launch of Mediacoach, LaLiga’s clubs have outperformed their European rivals and the LaLiga broadcasts have benefitted from real time statistics that are also used across multiple digital platforms such as social media. Media Coach is the most advanced tool that any football league has developed."

For those who aren't aware of LaLiga, it was founded in 1984 and its full title is LaLiga (Liga de Fútbol Profesional).

"It is a sports association comprising the 42 teams that make up the first and second divisions of professional football in Spain. LaLiga, based in Madrid, is responsible for the LaLiga Santander and LaLiga 123 leagues and the television production, which in the 2016/17 season reached more than 2.5 billion people globally.

"The association also has an active foundation and is the world’s first professional football league with a league for intellectually challenged footballers: LaLiga Genuine."

More in this category: « VIDEO: The Moment, a brain-controlled film where your mind changes the movie TAFE NSW students created 'first ever' augmented reality sculptures Vivid Sydney »
Share News tips for the iTWire Journalists? Your tip will be anonymous