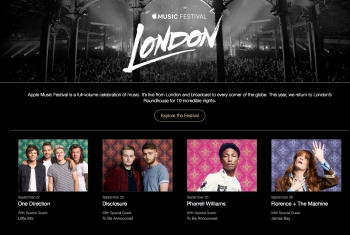 The world’s biggest music acts including Pharrell Williams, One Direction, Florence + The Machine, Disclosure and more will be headlining the 2015 Apple Music Festival in London this September.

Apple’s iTunes Festival has transmogrified into the Apple Music Festival, to be held as London’s Roundhouse in September 2015, with the performances once again to be broadcast online worldwide free of charge - live or on-demand via Apple Music.

As Apple states, its Festival ‘lets fans get even closer to their favourite performers with coverage on Beats 1 alongside backstage news and footage straight from the artists on Apple Music Connect.’

The Festival ‘takes place over ten nights from 19 September to 28 September’, and is the successor to the iTunes Festival hosted in London over the eight years, starting in 2007, an event which has unsurprisingly been renamed in honour of Apple Music’s existence, and has seen ‘550 artists perform in front of more than half a million fans and tens of millions more online and on-demand.’

Right on cue comes Eddy Cue, Apple’s Senior Veep of Internet Software and Services stating that: “We wanted to do something really special for music fans this year.

“The Apple Music Festival is a greatest hits set of ten unbelievable nights featuring some of the best performers on the planet appearing live and interacting directly with their fans on Connect and Beats 1.”

Naturally, the entire event helps Apple promote its brand new Apple Music service, a single app that combines your existing music library with Apple’s stunning selection of streamable tunes, alongside the company’s Beats 1 live radio station and the Apple Music Connect feature where ‘artists can share lyrics, backstage photos, videos or even release their latest song to fans directly from their iPhone.’

Mr Happy himself, Pharrell Williams, happily noted in a happy statement: “Wow, I’m so grateful to be performing at the Apple Music Festival. The Roundhouse is such a historic venue ... there’s always a special energy in the crowd. Thank you for having me!”.

Niall’s One Direction, who knows where he’s going, said: “It’ll be great to be back in London and we can’t wait to perform for our fans in the Roundhouse and around the world on Apple Music! See you there!”.

Without a hint of automation, Florence and her machine stated: “We’re excited to be playing at this year’s Apple Music Festival at the wonderful Roundhouse!”.

And, ensuring full disclosure about Disclosure’s statement, Disclosure disclosed that: “We’re super excited to play our first ever show for Apple Music Festival at the Roundhouse, one of our favourite venues in London. It’s also the day our album’s released so that makes it extra special!”.

Apple’s customers can experience the Apple Music Festival via Apple Music or iTunes on any compatible iPhone, iPad, iPod touch, Mac, PC or what Apple promises will be ‘stunning HD’ with Apple TV.

More detail about Apple Music Connect is here, while those wanting to dance to the drum of a different Beats 1 can get more info here.