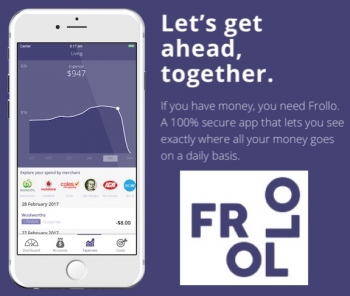 With new Frollo stats showing Australians are "spending three times more on ride-sharing services than on taxis", it follows that not keeping a close eye on in-app and tap-and-go payments can cost you.

New stats from Frollo say that "the scales have well and truly tipped in favour of the gig economy".

But what is Frollo, you may well be asking, if like me, you've never heard of it before?

Well, at its website, the company tells us that it is "a free personal finance and budget management app that not only lets you track all your spending and savings, it also helps you set goals and challenge yourself to make saving easier".

We're further told that "it’s like your current banking app, but on steroids", and "is 100% secure and connects with all Australian Banks using bank-grade security".

Frollo says that "just knowing your bank balance doesn’t tell you any thing about spending patterns or allow you to set goals", helping you "you take control of your money so you can make better financial decisions" and "see exactly where all your money goes on a daily basis".

So, what does all of this have to do with overpaying on Uber rides compared with payinng for taxis?

It turns out that after having crunched the transaction data from a sample of 1000 Frollo users, the personal finance platform found that "out of the people who had used any form of paid ride service in the last three months, a whopping 61% had used ride-sharing services only. A minority of traditionalists stuck to using taxis only (12%), while just over a quarter used both types of services (27%)".

Are Australians actually saving money by switching to the gig economy?

While the likes of Uber have surged in popularity over the past few years as a way to get around expensive taxi fares, Frollo says its analysis "revealed that 52% of users were spending three times more on ride-sharing services than they were on taxis".

Gareth Gumbley, chief executive and founder of Frollo, said: "The appeal of a cheaper service combined with the seamless, in-app payments resulted in many Australians over-spending on platforms such as Uber and Taxify.

“When there’s no money changing hands, and the dollar amounts are perceived to be quite low, it’s all too easy to over-spend. It’s an issue we’ve already seen with tap-and-pay, and now it’s rearing its head with ride-sharing services.

“Keeping an eye on how much you’re spending across different categories such as transport, going out, and groceries is the key to identifying any negative spending patterns. This is the first step towards being able to save money for big-ticket items like holidays and house deposits.”

Now, what makes Frollo different is that it's billed as being "the only personal finance app that incorporates a community challenges feature, which is designed to help motivate people to focus on what matters, such as cutting down on spending".

Currently trending is "a one-month ‘Bus vs Uber’ challenge, where users are tasked with spending 50% less on Uber for one month by opting for the bus, train, bike or walking".

And here we discover that "the average monthly saving for people who have completed Frollo’s ‘Bus vs Uber’ challenge is $55".

What else can Frollo do?

Another useful feature is "the ability to track your spending footprint by merchant. A handy line graph represents the volume of expenditure across a six-month timeline, enabling users to better understand their money habits".

And, given the app lets you see where "all your money goes on a daily basis", it's obviously very handy that the app "also categorises transactions automatically, so you can quickly see how much you’re spending on things like travel, groceries, rent and fuel".

So, what if you're one of these Uber addicts who perhaps unknowingly is spending more on Uber than they thought they were?

Gumbley added: “Frollo goes above and beyond the transaction-style reporting used by mobile banking apps. While those apps simply list your income and expenses, Frollo enables you to separate your spending, so you know your movies from your groceries, giving you the bigger financial picture.

"It also provides you with the insights, tools and support needed to help save for financial goals and reduce your day-to-day expenses."

So, there you have it. Another app you didn't know you needed, with a guarantee of 100% security, which in the age of endless hack attacks, we can only hope Frollo is well geared and protected to avoid the folly of getting stung, just as it hopes to help you from getting stung by unaware overspending.

And, if the app truly becomes popular and successful, banks, financial institutions and consumers may well need to Frollo the leader.

May the forces of good financial management be with you!