How Qualcomm is pioneering and developing innovations for 5G 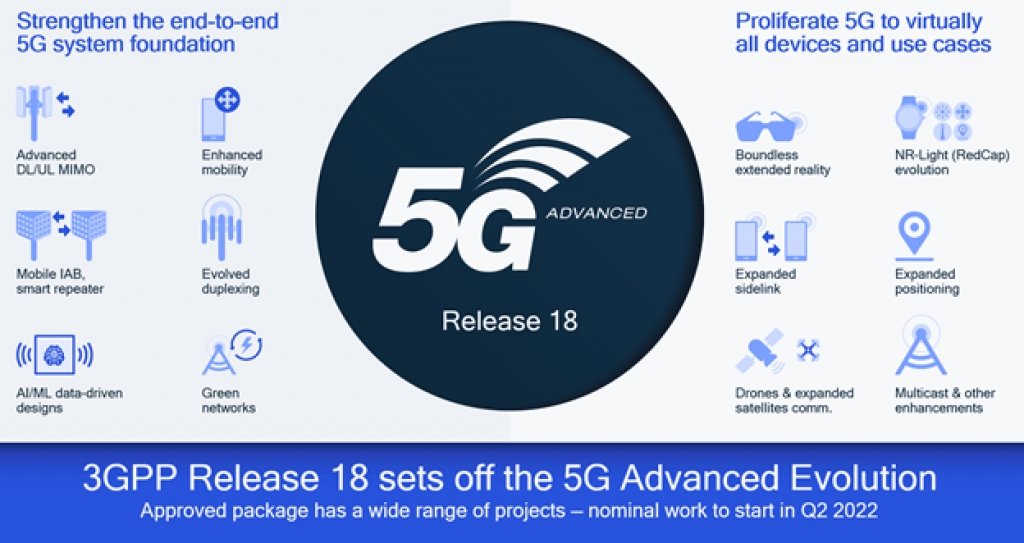 2021 marked an exciting year for 5G. For semiconductor company Qualcomm, it not only saw 5G commercial launches around the world, but it noted that 3GPP continued towards completing 5G NR Release.

After conducting a 5G Advanced workshop in June and multiple rounds of lively e-mail discussions with a large set of participating 3GPP companies, Qualcomm has approved a Release 18 (Rel-18) package, a set of projects that aims to deliver a balanced 5G Advanced evolution, which will address the short and longer terms needs of enhanced mobile broadband and expanded vertical use cases across the end-to-end 5G system.

Qualcomm says 5G Advanced starts the second phase of the 5G decade, bringing a new wave of wireless technology innovations. It is envisioned to push technology boundaries in two broad directions: to strengthen the 5G system foundation that further improves speed, coverage, mobility, power efficiency, as well as to proliferate 5G to virtually all devices, deployments, and use cases.

Rel-18 is the inaugural standard release of 5G Advanced, and below are the key projects and the scope they entail.

Mobile integrated access/backhaul (IAB) and smart repeaters: expanding capability for IAB on cars/trains to extend 5G coverage in sub-7 GHz and mmWave deployments for users inside and outside the vehicle, as well as supporting repeaters with traffic awareness and beamforming capability via side control information in TDD spectrum for deployments at high bands.

Evolved duplexing: identifying applicable and relevant deployment scenarios and use cases on the path to full duplex operations, focusing on non-overlapping subband full duplex that can improve network efficiency, latency, and coverage in TDD deployments.

Expanded sidelink: building upon the C-V2X and Rel-17 foundation to expand into new spectrum types and bands (i.e., unlicensed and mmWave), as well as sidelink relays that can further extend 5G coverage in challenging scenarios.

Qualcomm says there are Rel-18 projects beyond the ones that deliver additional improvements to the 5G system. This includes enhancements to dynamic spectrum sharing (DSS), multi-SIM, in-device coexistence, small data transmission, quality of experience, carrier aggregation, and self-organising network/minimisation of drive test (SON/MDT).

Nominal work for Rel-18 will start after completing Rel-17, expected in the first half of the next year. Qualcomm says it is working on some projects that will define the future of 5G.

This first appeared in the subscription newsletter CommsWire on 14 December 2021.

More in this category: « Fibocom FG360-NA Module now certified by T-Mobile Qualcomm study shows how 5G mmWave is measured and its impact »
back to top