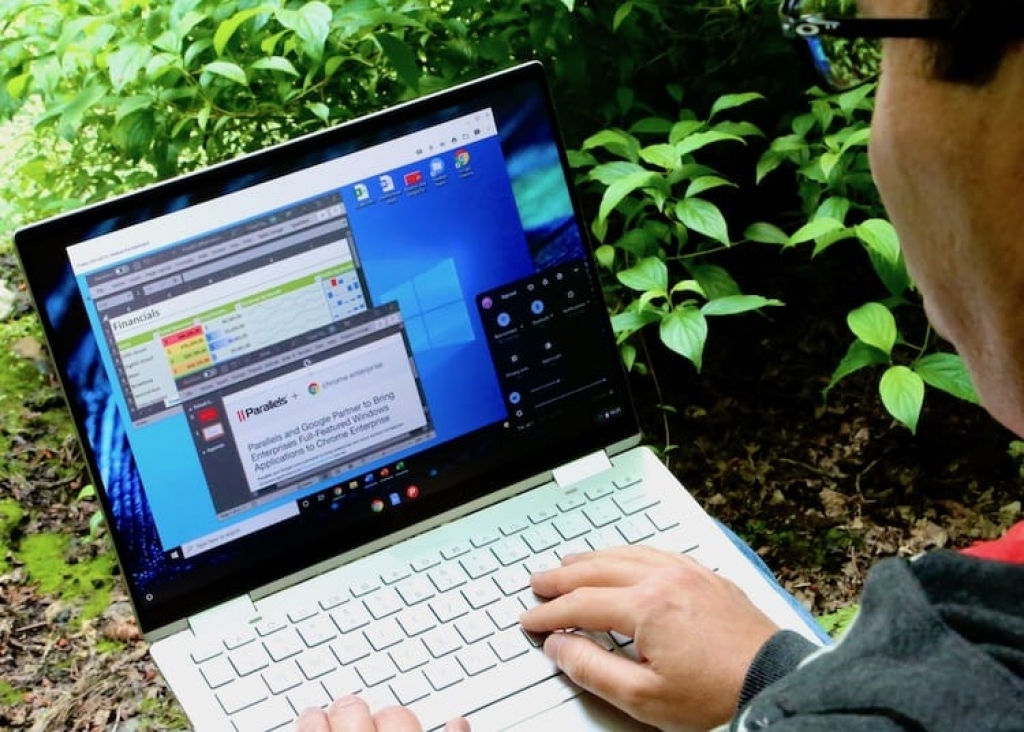 Parallels Desktop for Chromebook Enterprise allows Windows and its applications to run directly on enterprise Chromebooks.

This is a paradigm shift for Google, according to Parallels director of sales engineers Victor Fiss, as it means Chromebook users are no longer limited to browser-based apps.

It requires high-end hardware: the recommended specifications are an Intel Core i5 or Intel Core i7 with 16GB of RAM and at least 128GB of SSD storage.

Unlike VDI-based approaches, PDCE does not require an internet connection to function. Multiple Windows and Chrome OS apps can run simultaneously.

PDCE runs in a secure sandbox created by Google, according to Parallels vice president of communication John Uppendahl, who said most Windows apps run "without issues."

As it did with Parallels Desktop for Mac, Parallels has engineered PDCE to provide close integration between the two operating systems.

A shared clipboard provides bidirectional copy and paste of text and graphics, and any Chrome OS folder – including cloud storage folders such as Google Drive or OneDrive – can be shared with Windows. Windows' Desktop, Documents, and Downloads folders are located in the Windows files section in Chrome OS to avoid duplication and to ensure these files are accessible in Chrome OS when Windows is not running. Opening a document in these circumstances automatically starts the VM.

Windows audio output is routed through Chrome OS, but microphone input is not supported in the initial release. Other features planned for future releases include camera and USB support.

Windows applications are integrated in the Chrome OS "Open With" interface, and can be set up as the default applications for certain types. Windows can be set to open web links in Chrome OS or in a native browser such as Chrome, Edge, Internet Explorer, Firefox, Brave or Opera.

The Windows screen resolution can be adjusted between 1385x814 and 2126x1190 pixels by dragging a corner or edge of the Windows 10 window, and the maximise button is respected. There's also the option of putting Windows on a separate Chrome OS Virtual Desk in order to switch from Chrome OS to Windows and back with a swipe.

Printers set up in Chrome OS can be shared with Windows for ease of use. Native Windows 10 printing is also supported.

IT departments can use their existing management tools such as Intune to control the Windows VMs running on PDCE, Uppendahl said. Roaming profile, folder redirection and FSLogix are supported if PDCE's Shared User Profile option is disabled.. 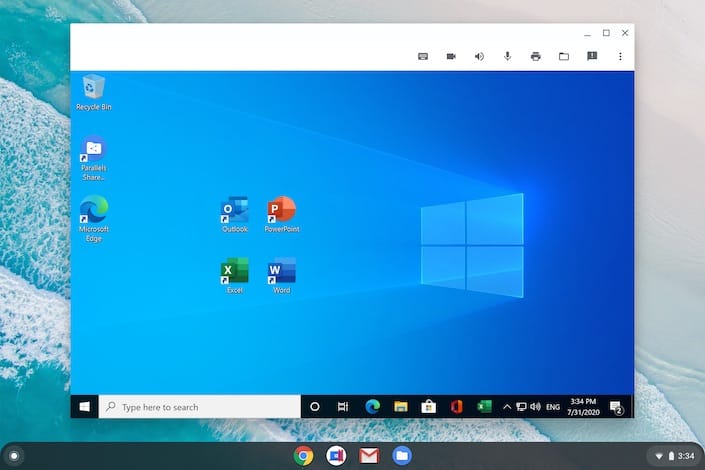 PDCE is integrated with the Google Admin console for tasks including licence administration, deploying particular Windows images to groups of users, and specifying the disk space required for VM operation. Devices must be covered by the Chrome Enterprise or Education Upgrade. Consequently, PDCE is not being sold for personal use, either directly from Parallels or through the Google Play Store.

That said, Chrome Enterprise and therefore PDCE are available to organisations of any size.

According to Uppendahl, it will be up to Google to decide when PDCE – or a similar product – can be released to a broader market. In time, the performance currently achieved by high-end Chromebooks will be available from entry-level models, so it would be "logical" for a personal version of the product to be released sometime in the future.

"Parallels Desktop for Chromebook Enterprise incorporates more than 22 years of Parallels' experience innovating software that makes it simple for people to seamlessly run multiple operating systems and applications on any device, to be more productive," said Parallels senior vice president of engineering and support Nick Dobrovolskiy.

"In addition to simultaneously running Windows and its full-featured apps alongside Chrome OS apps directly on a Chromebook, Parallels Desktop integrates a variety of useful features: Copy and paste text and graphics between Windows 10 and Chrome OS; frustration-free printing from Windows apps via shared Chrome OS printers or from printers that are only available for Windows 10; and the option to save Windows files locally on a Chromebook, in the cloud, or both."

Google vice president of Chrome OS John Solomon said "Chrome OS is increasingly being chosen by modern enterprises, either for remote work, hybrid, or in the office.

"We are thrilled to partner with Parallels to bring legacy and full-featured Windows applications support, through Parallels Desktop for Chromebook Enterprise, to help businesses easily transition to cloud-first devices and workflows."

The Windows VM can be quickly suspended and resumed to save time, and Windows automatically uses the Chrome OS network connection (including VPNs). The mouse cursor automatically transforms according to the OS in active use, and scrolling and zooming is available to Windows apps.

But wouldn't it be simpler for an organisation to stay with conventional Windows notebooks running web apps in a browser rather than adopting high-end Chromebooks plus PDCE and Windows to achieve the same end? Parallels referred iTWire's question to Google, but no reply had been received at the time this article was prepared for publication.

"Now more than ever, companies are embracing cloud-first IT strategies as the need for cloud solutions that provide greater flexibility and productivity has increased," said HP vice president and general manager of cloud client group Maulik Pandya.

Parallels Desktop for Chromebook Enterprise costs $99.99 per user per year, including premium (phone and email) support. A free one-month trial with five user licenses is available.

Published in Windows
Tagged under