Blocking the pirates has no effect, aargh! 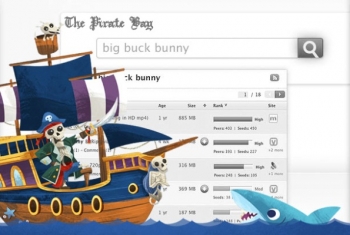 A research paper by four Dutch academics has shown that blocking sites such as The Pirate Bay, which allow users to download copyrighted material via the BitTorrent technology, has had little effect.

Users simply use proxies or go to other sites – there are now hundreds of BitTorrent services on the Internet. There appears to be no way to stop them, either through legal or technical means. The study used both a survey of the users of pirate sites and BitTorrent monitoring technology to test the effectiveness of the ban.

The rulings meant that more than 80% of Dutch Internet subscribers can no longer access The Pirate Bay directly through their ISP. But the study found that the ruling had “no lasting net impact on the percentage of the Dutch population downloading from illegal sources.”

It’s interesting that it is the Dutch Government which has taken some of the strongest action against piracy. When I look at the illegal content on BitTorrent sites (which I very occasionally do for research purpose only), I find a very high proportion of content with Dutch subtitles. Those crazy Hollanders love uploading and downloading this stuff.

The study is imaginatively titled ‘Baywatch’. Unfortunately the witticisms end there – the paper is written in the stultifying academese standard in all universities around the world. Academics who attempt to write engagingly soon get it knocked out of them. But it’s worth a read. You can download it at www.ivir.nl/publications/poort/Baywatch.pdf

The study says that one of the main reasons copyright holders gave for asking the court to make ISPs block access to The Pirate Bay was because such blocking supposedly worked in Italy and Denmark. The ISPs said that it was easy to circumvent such an intervention, by making use of virtual hosting or an anonymous web proxy provider.

The authors rightly say that “the economically more relevant question is not whether blocking access decreased the number of visitors, but what the effect of the blocking has on online copyright infringement as a whole.” The study concludes that “while a small group of respondents download less from illegal sources or claim to have stopped, there is no lasting net impact on the percentage of the Dutch population downloading from illegal sources, as people learn to use alternatives to The Pirate Bay.”

They surveyed over 2,000 users of The Pirate Bay at the time of the blocking in May 2012 and again in November and December, to compare how they thought their downloading behaviour might change with how it actually did change. It looked at downloads of music, video, eBooks and games. It had less effect than the users thought it would.

There are a number of detailed tables describing the results. Guess what? “Downloading from illegal sources has not decreased since the intervention. In fact, for users of some ISPs the percentage of consumers who downloaded in the preceding six months increased. Approximately 25% of consumers downloaded from an illegal source in the past six months, of which 20-25% decreased their downloading in reaction to the blocking.

“The percentage of customers that downloaded in the past month increased. Thus, though a small share of downloaders report a decrease in their downloading activities after the blocking, this effect is not reflected in the overall numbers, possibly because there are other consumers who have started downloading from illegal sources.”

The results were confirmed by the second methodology employed by the team, which used a BitTorrent monitoring tool at the ISP level. The sample was much smaller, but the results were the same, showing “limited effects of the intervention on BitTorrent file sharing.”

It’s the old story, a bit like the so-called War on Drugs. Trying to stop someone from doing something they like, and which is hard to enforce, has no effect whatsoever. “First, the intervention can only affect consumers who download from illegal sources, about one quarter of the population.

“For this segment a large majority (70-72%) are nonresponsive to blocking access to The Pirate Bay. This is significantly more than consumers expected in advance of the blocking. About half of those who report a response to the intervention state they download less, while a third state they stopped downloading altogether. The rest claim to download more as a result of the intervention.”

Hardly a positive result for such a draconian measure. Some stopped, half downloaded less (in most cases only a little less), the rest downloaded more (many of them much more). Perhaps the solution is for copyright holders to change their business models and provide easier access to content, rather than by trying to criminalise consumers and hobble ISPs.

But that would be too easy, wouldn’t it?

BACK TO HOME PAGE
Published in Web Hosting
Tagged under

More in this category: Rackspace extends service offerings from Sydney data centre »
Share News tips for the iTWire Journalists? Your tip will be anonymous